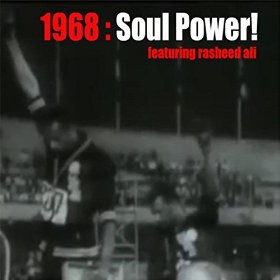 Click on CD cover
to listen or purchase
http://www.amazon.com/gp/product/B00VGHFTEI/ref=as_li_qf_sp_asin_il_tl?ie=UTF8&camp=1789&creative=9325&creativeASIN=B00VGHFTEI&linkCode=as2&tag=soultracks-20&linkId=TM6F37AUCWKEOLBQ

On Dec. 24, 1968, the astronauts of Apollo 8 became the first men to orbit the moon and return safely to earth. They were also the first humans to gaze out of a window from space and see the earth. The famous photo of the earth looking like a tiny marble against the massiveness of space elicits plenty of one word descriptions. Peaceful would certainly be appropriate.

Many words can be used to describe the year 1968, and peaceful would surely be inappropriate. Most people would probably describe the year as tumultuous. The Johnson Administration lost control of the narrative of the Vietnam War because it appeared that the military lost control of the battlefield. President Johnson decided not to run for re-election. Rev. Martin Luther King and Sen. Robert F. Kennedy were both assassinated – and that’s just the big events from the first half of the year. Events such as the Democratic convention in Chicago, the Mexico City Olympics, the student riots in France and Richard Nixon’s election took place in the second half of the year.

The music, of course, was great. Soul Brother Number One James Brown implored us to “say it loud, I’m black and I’m proud.” Otis Redding’s “(Sitting On) The Dock of the Bay” (which was made in 1967) topped the charts for four weeks on its way to become 1968’s fourth most popular song.

Rasheed Ali’s 1968: Soul Power is an overview of that year’s music, culture and politics. However, the album – and you’ll be hard pressed to find a record made in 2015 that wears the labels of album and record with more ease than 1968 – does not include a single song that was released or even made in the year that changed everything.

The 18 songs on 1968: Soul Power are all original, but don’t sound the revivalist songs of groups such as Sharon Jones and the Dap Kings. What distinguishes 1968: Soul Power is that it’s a concept album that seeks to recount the history of that year through song.

That makes Ali sort of a funky time traveller  – or perhaps a soulful Frank Borman – using a time capsule instead of a rocket ship to give listeners a panoramic view of life on earth in 1968. Ali adopts arrangements, instrumentation, production techniques and technologies that performers such as Brown, Jimi Hendrix, Sly Stone and Stax deployed in the late 1960s and early 1970s.

Sonically, 1968: Soul Power embraces the spirit of James Brown, and why not? Brown was at the top of his game in 1968 from his socially conscious lyrics to that power packed horn section led by Maceo Parker and Fred Wesley. Brown’s music was a part of the year’s soundtrack and the Godfather became more than a musician when he stopped a riot in Boston in the aftermath of King’s assassination by performing in concert.

Listen to tracks such as “Twenty-Four Seven,” with its percussive horn section, assertive guitar riffs, on-the-one bass line and a message that seems torn out of today’s headlines – think Rachel Dolezal – and it’s clear that Ali seeks to capture the consciousness of the black pride movement that was reaching full flower in 68.

Cuts such as “Psychedelic” channel fuse the funk of Sly & the Family Stone with the mind altering sound of San Francisco psychedelic bands such as Jefferson Airplane, while the soulful “Vietnam,” with its narrative of two men forever changed by their tours of duty in ‘Nam sounds like it is inspired by Bill Withers’ 1973 protest song “I Can’t Write Left Handed.” Some might think that the uptempo “Burn Baby Burn” was inspired by Gregory Porter’s “1960 What?” since both tell stories of urban riots prompted, in part, by King’s assassination. While Ali says that he is a fan of Porter, the similarity is coincidental.

Ali said that seeing his sons listen to music that had the sound of what he was listening to in the 60s and 70s inspired him to create an album that possessed the authenticity that he felt some of the derivative efforts lacked. Ali also envisions 1968: Soul Power as a history lesson needed at a time when communities across the country deal again with issues, such as police-community relations, that bedeviled urban America in 1968. Listeners can be forgiven for concluding that 1968: Soul Power is a soundtrack in search of a stage play, and maybe Ali might want to look for a playwright. He’s set the stage for a story that is as relevant now as it was nearly a half century ago. Highly Recommended.