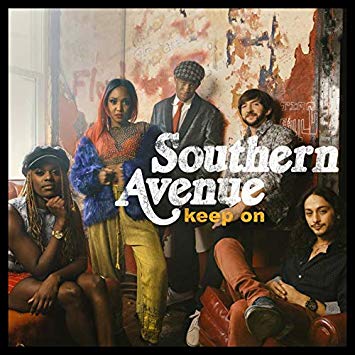 Click on CD cover
to listen or purchase
https://found.ee/SA_KeepOn

The music on Southern Avenue’s self-titled debut album reflected the Memphis street from which the band took its name. Southern Avenue runs from the city limits to the Soulville neighborhood that Stax Records helped to make famous. And the music on the band’s debut album brought to mind  Memphis soul - whether the band was covering tunes such as “Slipped Tripped and Fell in Love,” or putting their original spin on the Memphis sound on originals that drew from the church such as “Don’t Give Up,” the rockabilly of “Rumble” or the  classic soul of “Love Me Right.”

Band leader and guitarist Ori Naftaly and his band-mates expand to sound on Keep On, their follow-up album, by infusing this new project with the sounds that flowed into Memphis from New Orleans, the Mississippi Delta, the Ozarks and Appalachia, as well as the electrified blues and rock that rode on the highways and rails up north to places like Chicago. While the sound is wider in terms of range, the voice that carries that sound remains the same. It still belongs to power packed, home grown vocalist Tierinii Jackson, the sister of drummer Tikyra Jackson.

Keep On is a record definitely rooted in Memphis, right down to guest appearances Stax alum William Bell (who duets with Jackson on “We’ve Got the Music”) and bassist Gage Markey. Still, Keep On as a record shows that Memphis is the root of a musical tree that branched off in many directions. A track like “Too Good For You” finds Naftaly and looking toward Nashville and the country sound with the twang heard in his guitar. Jackson continues her exploration of a woman who sings about finding her voice and refusing to allow a man to discount her worth. That exploration began on Southern Avenue on the with rockabilly tune “Rumble.” While she allowed the rage of finding another woman in her bedroom with her man run free on that track, that anger is tempered by the realization that the foolish man on “Too Good For You” is not even worth her rage.

“The Switchup” is a percussive cut driven by the Tikyra Jackson’s attacking work on the drums and Markey’s funky on the one bass work on a track that hooks down to Augusta, Ga. and then heads north and west to Minneapolis. The title track is a sleek funk anthem that praises the virtue of perseverance.

Blues and rock fuse through the harmonic horn work of guest players Art Edmaiston and Mark Franklin along with Naftaly’s guitar work on “The Tea I Sip.” Jackson’s adds ample sass to the lyrics that find her assuring her man that they have each other on lock and ignore that doubts being sewn by the haters. “Savior” is what the old-timers would have called ‘belly rubbing’- or the kind of slow, churning track that brings couples so close together on the dance floor that no daylight can be seen between their fused mid-sections, and Jackson’s sultry vocals set the mood.

The blues and southern soul world fully embraced Southern Avenue and the release of their 2017 debut record, and the temptation to linger in that comfortable commercial and critical place was likely strong. However, that is not the way co-writers Naftaly - who came to America from Israel with the reputation as a blues guitar phenom - think. He wanted more, and he came to Memphis and linked with the Jackson sisters, who were also looking to for something more than performing in a series of cover bands. There is still plenty of room for exploration in the blues, soul and funk music and Keep On shows that Southern Avenue is a band that knows what it is looking for and knows what to do when they find it. Solidly Recommended