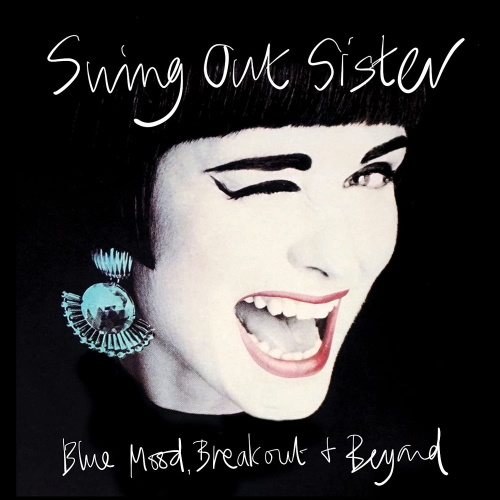 Click on CD cover
to listen or purchase
https://amzn.to/3Kzq3dq

When Swing Out Sister’s “Breakout” became a worldwide hit in 1987, it was as much of a surprise to the group members as to many pop-radio listeners who weren’t used to such prominent layers of soul and jazz interwoven with their top-40 doses. The celebratory tune of self-affirmation was, indeed, considerably more pronounced in its fusion of styles than its predecessor, 1985’s “Blue Mood.”

When Swing Out Sister’s “Breakout” became a worldwide hit in 1987, it was as much of a surprise to the group members as to many pop-radio listeners who weren’t used to such prominent layers of soul and jazz interwoven with their top-40 doses. The celebratory tune of self-affirmation was, indeed, considerably more pronounced in its fusion of styles than its predecessor, 1985’s “Blue Mood.”

As described in detail by Corinne Drewery and Andy Connell—the nucleus of the band since 1989—in the liner notes of Cherry Red’s new eight-CD box set, Blue Mood, Breakout, & Beyond, the runaway success of “Breakout” made it necessary to cut their chops in the studio and in live venues within a quick time frame. The resulting style that the duo—initially along with drummer Martin Jackson—crafted over their first three albums is represented in the set, which also includes a sought-after live album and four discs’ worth of remixes and B-sides.

Swing Out Sister has toured and recorded regularly over the three decades since the period showcased on Blue Mood, Breakout, & Beyond. It’s clear when listening again to their earliest LP’s that they’ve always had a firm grasp on their melodic and stylistic sensibilities. The core elements of lushly arranged soulful pop dashed with subtle sonic experimentation have remained defining factors in their musical essence, and Drewery’s assured, but never forced, vocal delivery has continued to be a vital component of their signature style.

It’s Better to Travel (disc one), their debut album, expanded on the combination of danceable rhythm tracks and bright horn sections that made “Breakout” so appealing. Follow-up singles “Surrender,” “Twilight World,” and “Fooled by a Smile” each possess memorable hooks, but notably left a bit more space for Drewery’s vocals to shine through. The contemplative lyrics of the latter two numbers foreshadowed the group’s mellower side, which they would come to explore more prominently on later albums. Meanwhile, the album track “It’s Not Enough” accomplished the same in a different vein, with the keyboard and percussive elements bearing a uniquely clubbier vibe.

1989’s Kaleidoscope World (disc two) found Drewery and Connell (by this point pared down to a duo) incorporating cinematically inspired symphonic arrangements, which they point out in the liner notes stemmed from their love of John Barry scores. Ranging in feel from the highly charged “You on My Mind” to the melancholy “Forever Blue,” the album is perhaps known most largely for a tune that was considerably different in make-up from most of the other selections: “Waiting Game.” Embodying a chordal structure similar to “Breakout,” the song is nonetheless distinctive in its juxtaposition of sprightly melodies with forlorn lyrics. In addition to standout tracks like the swingin’ “Tainted” and snappy “Between Strangers,” the album also boasts the unforgettable “Where in the World.” Expertly blending a sophisticated, guitar-laced groove with swirls of strings, its reflective words are brought to life beautifully by Drewery and backing vocalists Derek Green and Chyna.

Swing Out Sister’s third LP, 1992’s Get in Touch with Yourself, is the final studio album contained in the box set. Depending on where fans lived (and whether they frequented clubs or listened to the radio more often), they could be more familiar with either the club-tinged “Notgonnachange” or festive rendition of Barbara Acklin’s “Am I the Same Girl?” The former was remixed by house-music legend Frankie Knuckles and performed well on the American dance charts, while the latter surpassed Acklin’s original (not to mention a Dusty Springfield remake) commercially, topping the US adult-contemporary charts and achieving top-10 status throughout Europe. Some album cuts took a more mainstream approach than was found on the previous two albums; but there are noteworthy moments in the cleverly nuanced “Circulate” and the sleek and funky “Everyday Crime.”

1993’s Japan-only release, Live at the Jazz Cafe, comprises disc four of Blue Mood, Breakout, & Beyond. Swing Out Sister have issued several concerts on CD more broadly in recent years; but it’s particularly keen to have this relatively early set as part of a package containing the albums corresponding to the repertoire performed. The first half of the performance includes faithful executions of hits “You on My Mind,” “Surrender,” and “Twilight World,” while the second is highlighted by fresh presentations of “Breakout,” “Notgonnachange,” and “Circulate”—each incorporating prominent jazz ingredients (and a few invigorating Latin spices) into the affair.

Over three dozen remixes are spread across discs five, six, and seven of the box set. Fans of “Twilight World” and “Notgonnachange” will be stoked, as half a dozen versions of each are here—with almost as many of “Breakout” and “Waiting Game.” As these were created in an era which predated the widespread practice of totally reconstructing a song’s core for the dance market, the differences amongst these might seem minor to listeners raised on mixshow radio. There are certainly, however, profoundly pleasing sonic twists to the variations found in the Ulti Mix of “Waiting Game,” The World Travel Mix of “Twilight World,” and Growler Mix of “Blue Mood” (to name a few).

Finally, disc eight contains 11 B-sides spanning 1986 to 1992. The wide-ranging selection veers from edgy and moody grooves (“Dirty Money,” “Fever”) to serene piano balladry (a cover of Noel Harrison’s “The Windmills of Your Mind”) and riveting instrumental jamming (with some dreamy ad-libbing thrown in for good measure, as on “I Can Hear You But I Can’t See You”).

Amongst many fine British artists who impacted music globally in the late eighties and early nineties, Swing Out Sister are in a class of their own. As demonstrated on Blue Mood, Breakout & Beyond, they defined their sound deftly on their first album. With each successive release, they continued to hone it by organically adding fresh influences without compromising their artistic integrity. Highly recommended.