Various Artists - Tony Minvielle Presents Into Something (Vol. One) (2015) 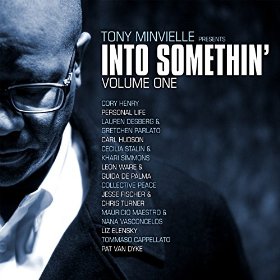 Click on CD cover
to listen or purchase
http://www.amazon.com/gp/product/B00VXKETM6/ref=as_li_qf_sp_asin_il_tl?ie=UTF8&camp=1789&creative=9325&creativeASIN=B00VXKETM6&linkCode=as2&tag=soultracks-20&linkId=6SBVRYR5UQPRTZ53

Doing a soul jazz reimagining of something from The Beatles Songbook would hardly be considered groundbreaking. Stevie Wonder added some funk to "We Can Work It Out”; Lakeside transformed “I Wanna Hold Your Hand” into a soul ballad;. Stanley Jordan and George Benson gave us jazzy versions of “Eleanor Rigby” and “Here, There, Everywhere”; and Earth, Wind & Fire” did a brassy, disco funk version of “Got To Get You Into My Life.”

Doing a soul jazz reimagining of something from The Beatles Songbook would hardly be considered groundbreaking. Stevie Wonder added some funk to "We Can Work It Out”; Lakeside transformed “I Wanna Hold Your Hand” into a soul ballad;. Stanley Jordan and George Benson gave us jazzy versions of “Eleanor Rigby” and “Here, There, Everywhere”; and Earth, Wind & Fire” did a brassy, disco funk version of “Got To Get You Into My Life.”

Still, I wouldn’t be too shocked if most people didn’t see an R&B/jazz fusion reimagining of John Lennon’s “Norwegian Wood” coming. Yet that’s exactly what DJ and producer Tony Minvielle did on his new compilation of R&B and jazz fusion, Into Something (Vol. One). Lennon’s original features acoustic guitar and a melody that sounds like that sailors might sing while in some dim seaside bar. In this version, vocalist Cecilia Stalin’s jazzy vocals stand in place of Lennon’s folksy sound and a smooth bass line replaces the acoustic guitar. The biggest difference, however, is the space that a five minute version of “Norwegian Wood” provides for jazz improvisation – whether it comes from Stalin’s vocalization or from the piano.

That is the theme throughout this therapeutic but never boring or repetitive album. Tracks such as “Music Power” that have the potential to become either preachy, cliché or elementary in the lyrics, get taken to another level through the tight performances of the musicians. “Music Power” features a flute solo that – as flute solos are wont to do – calls to mind pastoral images. But as the vocals fade, they are replaced by an extended piano solo before the flute returns with a fluttering solo that sounds like a butterfly’s wings. Then flute, piano and drums move into an intense, funk infused battle before piano, flute and voice, bringing the tune to a calming glide path to conclusion.

Into Something (Vol. One) combines voices that will be familiar to American audiences with people who may not be as well known. Such is the case on “A Seed in You,” an ultra-smooth and seductive ballad that features Portuguese vocalist Guida De Palma and Leon Ware, the American soul man who gave us great tunes such as “I Wanna Be Where You Are” and “I Want You.”

Gretchen Parlato brings her breathy and erotically cooing vocals to a version of “You Go To My Head” that brings to mind some of the R&B infused jazz being made on this side of the Atlantic by Robert Glasper. “Distance Can Be Sweet” is a mid-tempo fusion of R&B and funk that features brassy accents, a smooth bassline and a memorable hook. While this track stands as the most radio ready cut on this album, it is hardly the only cut on the album that’s worth several listens.

Artists today appear intent on finding a marketable intersection between jazz and R&B by fusing the strongest and most distinct aspects of both genres. Jazz brings strong musicianship and creativity and improvisation to the table. R&B brings distinct and relatable vocals, lyricism that is strong while also sporting content that has mass appeal, and melodies that the listener can grab and groove to. Back in the day, this was the stock and trade of performers such as Roy Ayers and George Duke, so it’s not like people don’t know how to do this.  But those kinds of performances are in the minority now, so seeing artists such as Minvielle return to this classic genre and add their own unique touch is a welcome trend, and one that turns a simple compilation into something that can be cherished for years to come. Solidly Recommended