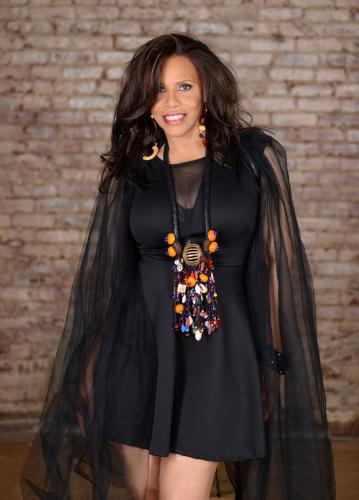 Alfa Anderson is a soul and dance music icon whose voice defines an entire era of popular music. As one of the original lead vocalists in the Rock & Roll Hall of Fame-nominated group, Chic, she helped producers Nile Rodgers and Bernard Edwards build a mountain of gold and platinum albums with hits like "Le Freak," "Good Times," and "I Want Your Love." To the delight of fans all around the world, Alfa's "soulful, sensitive delivery" (Billboard) takes center stage with the release of From My Heart (2017), her very first full-length solo album.

From My Heart spotlights an impressive range of songs that Alfa wrote and co-produced with the multi-talented Bert Price. The album's first single "When Luther Sings" features Alfa's rousing, heartfelt tribute to her longtime friend Luther Vandross, while powerful ballads like "Sending You Love" and sizzling club tracks like "Dancing Is My Release" add the exclamation point to Alfa's long-awaited solo debut.

A celebrated New Yorker by way of Augusta, Georgia, Alfa Anderson began her professional singing career alongside some of the industry's most talented vocalists and musicians. She had a featured role in Cannonball Adderley's Big Man (1976), which premiered at Carnegie Hall, and also starred in Lincoln Center's production of Children of the Fire, a piece scored by legendary trumpeter "Hannibal" Marvin Peterson. Throughout the '70s, she recorded background vocals for a variety of artists, including Nat Adderley, Ray Barretto, Odyssey, Major Harris, and Roy Buchanan. Alfa also sang on the Quincy Jones-produced soundtrack to The Wiz (1978) and Atlantic Records' Live at Montreux (1978) album produced by Arif Mardin and Herbie Mann.

Alfa Anderson's life changed when Luther Vandross invited her to a vocal session for Chic. At the time, Nile Rodgers and Bernard Edwards had just formed the group with Tony Thompson on drums and Norma Jean Wright on lead vocals. She sang background on Chic's first two singles for Atlantic Records, "Dance, Dance, Dance (Yowsah, Yowsah, Yowsah)" and "Everybody Dance," which both brought Chic to the top of the dance charts for seven consecutive weeks in 1977. After joining Chic on tour, Alfa was promoted to lead vocalist, a role she and Luci Martin shared from 1978-1983.

The group's second album, C'est CHIC (1978), was a critical and commercial tour de force. It featured Anderson's two solo numbers, "At Last I Am Free" and the gold-selling single "I Want Your Love." Alfa and renowned session vocalist Diva Gray both sang lead on "Le Freak," Rodgers and Edwards' ode to Studio 54. The song not only became Chic's most successful single but, for more than 30 years, was the biggest-selling single in Atlantic's history. "Le Freak" topped the Hot 100 for three weeks and went to number one on both the R&B and disco singles charts, quickly earning gold and platinum certifications. C'est CHIC was later named "1979 R&B Album of the Year" by Billboard after it topped the R&B chart for eleven weeks.

Risqué (1979) continued Chic's influence across all genres of music and spawned another number one pop and R&B hit, "Good Times." The song brought hip hop to the mainstream when it was sampled on "Rapper's Delight" by the Sugar Hill Gang. Alfa maintained a lead role in Chic on Real People (1980), Take It Off (1981), Tongue in Chic (1982), the Soup for One (1982) soundtrack, and Believer (1983). Between her many appearances with Chic on Soul Train, The Midnight Special, Top of the Pops, and New Year's Rockin' Eve, Alfa lent her vocals to Chic-produced sessions for Sister Sledge (We Are Family, 1979), Diana Ross (diana, 1980), and Johnny Mathis (I Love My Lady, 1981).

After Chic dissolved, Alfa Anderson continued her singing career with a variety of solo artists, most notably Luther Vandross. From 1982 through 1987, she was a member of Vandross' touring band and performed at Wembley Stadium, among many other prestigious venues around the world. Throughout the '80s and '90s, Alfa sang on albums by Bryan Adams, Gregory Hines, Mick Jagger, Teddy Pendergrass, Jennifer Holliday, Billy Squier, Sheena Easton, Jody Watley, Bryan Ferry, and Jonathan Butler.

In the late-'90s, Anderson and her husband Tinkr Barfield formed and produced Voices of Shalom, a group who explored spiritual themes through uplifting original compositions. They released two full-length albums, Messages (1999) and Daily Bread (2002), as well as a single called "What A Spirit" (2005), which featured guest vocals by Lisa Fischer and Keith Anthony Fluitt. Meanwhile, Alfa's voice continued to introduce the music of Chic to younger listeners through feature films like Shrek 2, Toy Story 3, Up in the Air, 54, Roll Bounce, and Spike Lee's Summer of Sam.

Alfa reunited with Chic vocalists Luci Martin and Norma Jean Wright in 2010 on "My Lover's Arms." The trio was also joined by Lisa Fischer, who'd previously sung with Alfa in Vandross' band and Voices of Shalom. Produced by Tinkr Barfield, "My Lover's Arms" appeared on Tinkr B. & Lu-Fuki's It Is What It Is (2011). The album included Alfa's lead vocals and songwriting contributions on "Money, Power" and "The Song That Captures Your Heart," laying the groundwork for her first solo single, "Former Lady of Chic" (2013), written and produced by Eluriel (Tinkr) Barfield, Eluriah Barfield, and Taurie Barfield.

"Former Lady of Chic" sparked a surge of interest in Alfa's career. Author James Arena devoted an entire chapter to Alfa in his best-selling book First Legends of Disco (2014), which led to Alfa's acclaimed appearance with Norma Jean Wright and Luci Martin at the "First Ladies of Disco" concert in Palm Springs. That same year, Alfa performed at Central Park SummerStage (NYC), the Grand Opera House (Wilmington, DE), The Cutting Room (NYC), Joe's Pub (NYC), and the opening of the Hard Rock Hotel in Ibiza, where she was a surprise guest during the venue's inaugural concert by Nile Rodgers.

Ibiza-based production team Aristofreeks produced a series of songs for a trio that Alfa formed with Norma Jean and Luci called Next Step. Featuring guest vocalist Kathy Sledge, "Get On Up" brought Next Step to #8 on Billboard's Dance Chart in May 2016 following the trio's headlining performance with Cirque du Soleil at Mandalay Bay (Las Vegas). Nile Rodgers also invited Alfa and Luci to sing on the first new Chic single in 23 years, "I'll Be There" (2015). Released on Warner Bros., the song topped the U.K. charts and bridged two generations of Chic Organization vocalists. While "Le Freak" was inducted into the Grammy Hall of Fame, Alfa received the G.E.M.A. Foundation's "Golden Mic Award" (2014) and a Citation from the City of Philadelphia that recognized her many contributions to music.

Honoring a legacy of hits, and a fresh sound that melds the classic and contemporary, Alfa Anderson is poised to make 2017 another exciting chapter in a career that's shaped by one musical benchmark after another. With every note she sings, Alfa's soulful, sophisticated style spellbinds listeners of every generation, all around the world … from her heart to yours.

Music from my Heart