Anthony Hamilton - Home for the Holidays 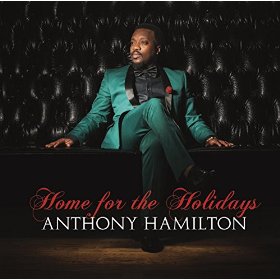 Click on CD cover
to listen or purchase
https://www.amazon.com/Home-For-Holidays-digital-booklet/dp/B00O0PPWOK/ref=as_sl_pc_tf_til?tag=soultracks-20&linkCode=w00&linkId=4DEQ62JUTZD4VAX3&creativeASIN=B00O0PPWOK

As family and friends gather around for the Christmas holidays, that infectious spirit comes alive with children playing, lots of romance in the air, gift giving and listening to the hymns, carols and hits that kindly remind them of this once a year event. Those special memories have inspired recording artists to spread even more holiday cheer towards their fans. And the more Christmas projects that are in the air, other artists who have heard some kind of joyful noise from their musical peers eventually want to get in on the action. When family man and quintessential soul man Anthony Hamilton announced he would release a holiday disc in 2014, it came as no surprise to his fans and critics who already knew he could sing about anything and everything in genuine fashion.

Those who have followed Hamilton on his roller coaster ride in and out of several record label deals since his out-of-print 1996 bow, XTC, instantly recognize his trademark expressive vocals that resonate over many country miles, captured with his trademark gritty soulful tenor, graced by kicking gospel passion and enriched by his storytelling integrity. His keepin’ it real attitude is reflected in several of his best known work: sacrificing love for the musicians’ road – his signature song, “Charlene,” handling life without a father – “Comin’ Where I’m From,” and praying for restoration in a relationship – “Pray for Me.” In the case of Hamilton’s latest work, Home for the Holidays, his attraction to the coolness of Christmas music and the enjoyment it has brought to his family was enough inspiration to feed off his passionate soulful palette.

Home for The Holidays reflects the warm feelings surrounding the season and of course, dishes out the honest, emotional pie that Hamilton’s loyal fans have come to expect. “It’s Christmas” provides a song to take a load off one’s feet decorated by modern R&B dance grooves, complete with sleigh bells and chimes. Hamilton throws down some Motown on "Spend Christmas with You:" “The only thing that I need/Is having you right next to me.” “‘Tis the Season" resonates with Hamilton’s effortless soulful swagger: “Nothing ever feels this good.” In a completely different musical shade, the title track featuring Gavin McGraw runs on a soft country vibe, but maintains that gritty Hamilton aftertaste. Along with the original compositions, there are several covers on Home for The Holidays, most of which are favorable choices that match Hamilton’s emphatic personality.

“Away in a Manger” is completely flipped into a front porch blues, centered around a perfectly suited duet with ZZ Ward and a gospel choir joining in on the finish. Hamilton provides a very respectable reading of the James Brown holiday hit, “Santa Claus Go Straight to the Ghetto.” While “Please Come Home for Christmas” possesses a bit less of Hamilton’s usual spark, The Emotions classic 1973 ballad on Stax Records, “What Do The Lonely Do at Christmas,” makes up in charismatic volumes. He also lights several fires under the Harry Simone choir piece, “Little Drummer Boy,” underneath a catchy electric piano hook, saxophone fills and bongo tingles: “We come to rock/We come to sing/We come to celebrate the living king.” The interlude is just as tasty with a simmering soul-gospel three-part harmony.

Hamilton brings his down-home spirit of Christmas into Home for the Holidays. While some musicians attempt to package their holiday goods in over-jazzed up arrangements, Hamilton strays from compromising his own artistic merit by keeping it soulfully fresh with the Christmas chestnuts and delivering several potentially new R&B holiday favorites, especially with the title track and “'Tis the Season.”  Besides his long-time fans, families will fully appreciate this timeless present in Home for the Holidays from one of soul music’s more recent gems. Highly Recommended.