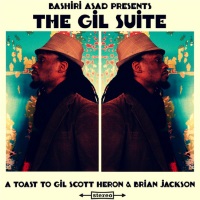 Click on CD cover
to listen or purchase
http://bashiriasad.bandcamp.com/album/bashiri-asad-presents-the-gil-suite

A frequent Facebook question asks people if they had a chance to see a concert performance by music legend who has left us, who would they choose? The post is accompanied by the photographs of departed legends such as Marvin Gaye, Barry White, Luther Vandross and Whitney Houston. I can’t recall ever seeing Gil-Scot Heron’s photo included in that array of immortals. I can say this – if I was making that choice at this moment in history, I can’t think of anyone – with the possible exception of Richard Pryor – who I’d want to see more than Gil-Scot Heron.

Just consider everything that has happened in this nation and world in the three plus years since Gil-Scot Heron died in 2011. Wouldn’t it be interesting to turn on the radio and hear Heron’s take on police community relations? The irony is that Heron has been dead to radio since he dropped Reflections in 1981, so you probably won’t even hear on hip-hop music stations “No Knock,” Heron’s spoken word piece about a late 1960s/early 1970s policy that allowed law enforcement to enter homes without warning. That’s despite the fact Heron stands as a major influence on generations of rappers and socially conscious R&B artists such as Bashiri Asad.

Asad keeps the memory of Heron alive with The Gil Suite – a six track EP featuring some well-known and lesser known works of spoken word and sung pieces from Heron’s fertile period in the 1970s. The Gil Suite is a loving rendition released at an opportune time, considering all currently going on in our country.

Tracks such as “Home is Where the Hatred Is” feature 21st Century production techniques that take account of the impact that hip-hop has had on R&B, and the comfort that an artist such as Asad has with that genre. However, Heron employed these same techniques on his final album, I’m New Here.

Still, the vocal phrasing of Asad and his guests capture the rage, despair, (yes) hope and keen insight that Heron often brought to his work. The standout is the faithful rendition of “Pieces of a Man.” Asad’s baritone wraps itself around the jazz influenced sparseness of the piano, bass and keyboard accompaniment on a track that recounts the shattering experience of a man who learns through the mail that he’s been laid off. Heron’s lyrics capture the scene of four people playing their part in an American tragedy replayed plenty of times over the past seven years. A man ripping up a termination of employment letter delivered by the mail man. A grandmother dutifully sweeping the document representing the shredded dignity of a man who just lost his identity as bread winner as his son watches the scene unfold in front of him.

Tracks such as “Pieces of a Man” and “Home is Where the Hatred Is” probably received airplay at a time when those types of critical voices were common on black radio. However, a number such as “Comment #1” did not get airplay, and not just for its frequent dropping of F and MF bombs. “Comment # 1” is a rage filled examination of the concerns and priorities of white liberals and juxtaposes them against the existential struggle confronting black activists and leaves one to wonder if the goals of the two will forever be mutually exclusive.

The issues Heron’s work addressed – the plight of the working man, critiques of the American, political, economic and cultural system, the relationship between black activists and would be allies and of course police/community relations – have all returned with a vengeance to the forefront of political conversations.

Heron’s passing sadly deprives us of the opportunity to hear his fresh prophetic insights, but with The Gil Suite, Asad and his collaborators give listeners another chance to hear Heron’s words in light of current events. And they sound as timely as ever. Recommended.