Happy Birthday to Eddie Kendricks of The Temptations 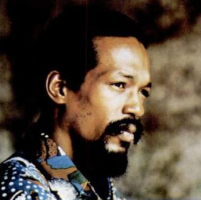 Happy birthday to the late Eddie Kendricks of the Temptations, born December 17, 1939.

It is impossible to talk about the development of soul music since the early 60s without repeatedly coming back to the Temptin' Tempts.  In the 60s they redefined the soul group, from the impeccable look they brought to the stage, to their focus on group choreography, to, most importantly, the immediately identifiable 5-part group harmony they mastered.  Every major soul group since 1965 owes a huge debt to the Temptations, and most acknowledge it. (READ FULL BIOGRAPHY).

Happy birthday to the late Eddie Kendricks of the Temptations, born December 17, 1939.

It is impossible to talk about the development of soul music since the early 60s without repeatedly coming back to the Temptin' Tempts.  In the 60s they redefined the soul group, from the impeccable look they brought to the stage, to their focus on group choreography, to, most importantly, the immediately identifiable 5-part group harmony they mastered.  Every major soul group since 1965 owes a huge debt to the Temptations, and most acknowledge it. (READ FULL BIOGRAPHY).

Kendricks' soaring falsetto was instantly recognizable, and drove many of the biggest hits of the Temptations, including "The Way You Do The Things You Do" and a signature song, "Just My Imagination." But amidst group turmoil, Kendricks left the Temptations in 1971. Kendricks' solo career began slowly; he endured two years of singles that missed the Top 40, while The Temptations continued with their string of Norman Whitfield-helmed hits. Despite enjoying only a modicum of commercial success and radio airplay, Kendricks's 1972 album, People... Hold On, was a cornerstone of DJ playlists in downtown New York's nascent disco scene. As the dance craze seeped through into other cities, Kendricks scored a #1 pop hit in 1973 with the Frank Wilson-produced "Keep on Truckin'". It sold over one million copies, and was awarded a gold disc. Future hits included "Boogie Down" (US #2) (1974), "Son of Sagittarius" (US #28) (1974), "Shoeshine Boy" (US #18) (1975), and "He's a Friend" (US #36) (1976). Another notable song is "Intimate Friends" (1977), which is sampled for the Alicia Keys song "Unbreakable", "A Penny for My Thoughts" by Common, Sparkle's "Time to Move on" on her self-titled first studio album and Sweet Sable's "Old Time's Sake" from the soundtrack for the 1994 2pac film,Above the Rim. Erykah Badu also sampled "Intimate Friends" for her song "Fall in Love (Your Funeral)", as well as his song "My People... Hold on" for her song "My People" on her album New Amerykah Part One (4th World War).

Exasperated by a lack of creative and financial control, Kendricks left Motown in 1978, with the requirement of signing away the rights to his royalties. He moved first to Arista Records, and later to Atlantic Records. By this time, his popularity had waned, and he was also gradually losing his voice as a result of chain smoking.

He and David Ruffin briefly re-joined the Temptations for a 1982 reunion tour. In an interview with Tom Meros, Dennis Edwards, Kendricks's former Temptations band mate, claimed that Kendricks had issues hitting his falsetto notes during recording sessions for the reunion album. Because of his singing difficulty, Edwards said that Kendricks went to a physician to examine his vocal ability. The physician discovered a "pin drop" of cancer on one of his lungs. However, Kendricks reportedly refused to undergo chemotherapy at the time because of fear that he would lose his hair.

Ruffin and Kendrick (Kendricks dropped the "s" from his stage name during the 1980s) reportedly met up one night when Ruffin went to watch Kendrick perform in a nightclub; Kendrick spotted Ruffin in the crowd, pointed him out, and invited him to come up on stage and perform with him. Afterward they talked about touring on their own and recorded an album as a duo for RCA in 1988.

Earlier, in 1985, they participated in the Hall & Oates live album Live at The Apollo recorded at a benefit at New York City's Apollo Theater, and sang with the duo at Live Aid in Philadelphia and the MTV Video Music Awards in New York. Hall & Oates have cited Kendrick and Ruffin specifically, and the Temptations in general, as a major influence. The collaboration resulted in an album of duets by Ruffin and Kendrick and a modest hit, "I Couldn't Believe It."

In 1989, Kendrick, Ruffin, and their Temptations bandmates were inducted into the Rock and Roll Hall of Fame. There, Kendrick and Ruffin made plans with fellow former Temptation Dennis Edwards to tour and record as "Ruffin/Kendrick/Edwards, Former Leads of The Temptations." The Ruffin/Kendrick/ Edwards project was cut short in 1991, when Kendrick was diagnosed with lung cancer and David Ruffin died of a drug overdose, although Kendrick and Edwards continued to tour for the remainder of 1991.

In late 1991, Kendrick, by now living in his native Birmingham, Alabama, underwent surgery to have one of his lungs removed in hopes of preventing the spread of the cancer. He continued to tour through the summer of 1992, when he fell ill again and was hospitalized. Kendrick died of lung cancer in Birmingham on October 5, 1992 at age 52.

A portion of this article is licensed under the GNU Free Documentation License. It uses material from the Wikipedia article Eddie Kendricks.