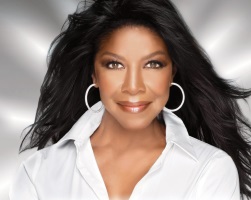 In the realm of the female artists who first began recording in the 70s, few had the kind of impact that Natalie Cole did.   While her pedigree - as the daughter of the legendary Nat King Cole - certainly didn't hurt in gaining the immediate attention of the media and the public alike, Natalie quickly established herself as very much her own singer, more akin in style to Aretha Franklin rather than artists like Ella Fitzgerald and Dinah Washington who were her father's musical contemporaries.  Ironically, as her career has progressed, Natalie herself has developed more as an interpretative song stylist leaning more towards the classic work of Fitzgerald, Sarah Vaughan and, of course, her own father as a source for material to record, distinct from her role as a purveyor of gospel-tinged emotive pop-flavored soul music that formed the basis for her 70s work for Capitol Records.

In the realm of the female artists who first began recording in the 70s, few had the kind of impact that Natalie Cole did.   While her pedigree - as the daughter of the legendary Nat King Cole - certainly didn't hurt in gaining the immediate attention of the media and the public alike, Natalie quickly established herself as very much her own singer, more akin in style to Aretha Franklin rather than artists like Ella Fitzgerald and Dinah Washington who were her father's musical contemporaries.  Ironically, as her career has progressed, Natalie herself has developed more as an interpretative song stylist leaning more towards the classic work of Fitzgerald, Sarah Vaughan and, of course, her own father as a source for material to record, distinct from her role as a purveyor of gospel-tinged emotive pop-flavored soul music that formed the basis for her 70s work for Capitol Records.

Surprisingly, the Los Angeles-born entertainer did not plan a career in music in spite of a family environment that would have made it a natural choice early on. Although she did sing with her father on a 1956 Capitol recording ("I'm Good Will, You're Christmas Spirit") at the tender age of six and appeared on television with her father on a couple of occasions, Natalie had determined by her late teens that she would pursue other interests.  She graduated from the University of Massachusetts in 1972 with a B.A. in child psychology and had it not been for some performing during her summer break at college, Natalie's life might have taken another direction.

Her increasing confidence in her own vocal ability prompted Natalie to begin performing on a regular basis but her initial experiences were sometimes less-than-inspiring: club owners would often emphasis the “family connection,” even promoting her simply as “the daughter of Nat King Cole” without even stating her name.  Eager to create her own identity, Natalie geared her stage performance towards material with a decidedly R&B feel and it was after appearing on a show in New Jersey with soul man Jerry Butler that Natalie got to meet two men who would definitively change her career path.

Both raised to sing in church from an early age, Marvin Yancy and Chuck Jackson had been friends and musical associates in Chicago for a few years prior to meeting Natalie.  The pair had formed the creative nucleus of a vocal group known as The Independents who scored R&B hits in 1972 and 1973 for Wand Records.  Jackson (no relation to the renowned '60s soul singer of 'Any Day Now' fame) and Yancy - an ordained minister - were also part of Butler's Windy City-based songwriting workshop and after Butler met Natalie, he suggested the duo might have some material for her.  According to her account in the first of many interviews we have done over the years, the burgeoning producer/songwriters saw Natalie perform at a club called Mr. Kelly's in Chicago and then got together with her in October 1974 in New York. The first song the trio tried was "You" which would become a key cut on Natalie's Capitol debut and would later be the title track for a 1976 Aretha Franklin album, ironic only because Jackson and Yancy had supposedly originally written several songs that Natalie recorded with 'The Queen Of Soul' in mind; in Franklin's own autobiography, she notes that the team presented her with tunes like  "I've Got Love On My Mind" and "This Will Be" that would be among Natalie's biggest hits.

While media pundits were quick to proclaim Natalie's emergence as the “new soul queen,” the record-buying public was simply enjoying the freshness and energy Natalie exuded on Inseparable: the album - with standout cuts like the emotive "I Can't Say No" and the jazzy "Joey" - went gold while the classic title track was issued as a single in December 1975 and matched its predecessor in topping the R&B charts.

Even before Capitol could release Natalie's much-anticipated sophomore set in May 1976, she had walked away with two prestigious Grammy Awards, one as "Best New Artist" and one for "Best R&B Vocal Performance, Female" for "This Will Be," breaking a run by - who else - Aretha Franklin who had the category locked down for some nine years.  Intent on demonstrating that she was no "one hit album" wonder, the team of Jackson, Yancy and Cole ensured that her second album was as strong as her first.  By the time the first single from Natalie, the perky, 1976-Grammy winner "Sophisticated Lady" had topped the R&B charts in the summer of '76, Natalie had become Mrs. Yancy and as she noted in her autobiography, "You can hear the love in those first few albums.  He and I truly did make beautiful music together..."

"Mr. Melody" became the second hit single from Natalie's second set which included the haunting "No Plans For The Future" and a version of the Billie Holiday classic, "Good Morning Heartache"; years later, Natalie would admit that her own problems with drug addiction would give her interpretation of the song special meaning.  At the time, only those closest to Natalie knew of the personal battle she was waging: to the public, she was a new artist would just kept better with each new album.  Proof positive came with "Unpredictable" which surpassed the sales of Natalie's first two albums, reaching platinum status, thanks in part to the runaway success of the gold single, "I've Got Love On My Mind" which would earn the distinction of being her biggest pop hit during her six years with Capitol.  For the first time, Natalie exercised her own creative muscle by penning "Your Eyes" and "Peaceful Living," two of the best songs on "Unpredictable," an album that also included the heart-wrenching "I'm Catching Hell," acknowledged as a true classic among Cole aficionados, and "Party Lights," an uptempo cut that seemed a perfect fit for the dominant disco fever of the late 70s.

1977 would prove to be a banner year for the singer, with the album Thankful and another massive hit in the form of "Our Love," a gold single and No. 1 R&B and top 10 pop hit that has remained a staple in the Cole repertoire since 1977.  Aside from the upbeat title cut, Thankful boasted the funky Cole-penned "Annie Mae"(inspired by a conversation with her then-housekeeper) and another Cole composition "La Costa," a smooth jazz standout (about a Southern California resort) written with Natalie's keyboard player and conductor Linda Williams that has long been considered a favorite among Natalie's many fans from the 70s.

At the end of 1979, Capitol issued We're The Best Of Friends, pairing their best-selling female star with soul man Peabo Bryson, who had quickly become the label's top black male vocalist thanks to a series of best-selling albums and singles that began after he signed with the company in 1977. There were a couple of chart singles released from the album but the duo did not tour together to promote the album and rumors suggested that the sessions had been less than easy due in part to Natalie's behavior, directly the result of her increased dependency on drugs.

Capitol released the album Don't Look Back in the summer of 1980 and it became the first Cole studio record bereft of a Top 10 R&B hit single.  At the time she cut the album, Natalie's personal life was in turmoil: her relationship with husband Yancy was on the ropes even though he worked on "Don't Look Back" (without Chuck Jackson but instead with arranger Gene Barge who had worked on all of Natalie's previous recordings).  The album's only hit  - a Top 30 pop and R&B single - was a non-Yancy/Barge production, the pop-flavored "Someone That I Used To Love," produced by Michael Masser who had co-written the song with Gerry Goffin.

Natalie's final album for Capitol was the only album she did not cut with Marvin Yancy.  The couple had divorced at the end of 1980 and it was left to producer George Tobin (who would later work with Smokey Robinson) to try and continue the magic that had made Natalie the kind of major hitmaker who could boast a coveted star on the Hollywood Walk Of Fame.  "Happy Love" never quite hit the mark even though there were a couple of worthy cuts such as "Nothin' But A Fool" and "You Were Right Girl," both of which were issued as singles.  One song, "Sounds Of A Happy Love" was likely the basis for the album's final title but it never made the final cut and remained unreleased until this 2-CD was compiled.

From 1981 to 1983, Natalie Cole's life underwent dramatic change: she dealt with the drug addiction that had contributed to the downturn in her recording career and by the summer of '83, she was back on the charts.  Four years later, she was enjoying renewed success with hits like "Pink Cadillac" and "Jump Start" and by the beginning of the 90s - with the release of the multi-Grammy-winning, multi-platinum international best-selling Unforgettable - Natalie had reached a new level of worldwide success and acclaim.  Her career as a singer and actress continued to flourish, and she continued to record with success well into the new century, alternating between pop, soul and jazz standards. And her legacy grew.

During the past decade of her life, Natalie continued to perform, even as significant illnesses interfered with her daily life. She continued to prove, however, that she was a one of a kind artist who carried on her family’s musical name with pride. She was indeed, unforgettable.

By David Nathan with assistance of Chris Rizik
http://www.soulmusic.com/