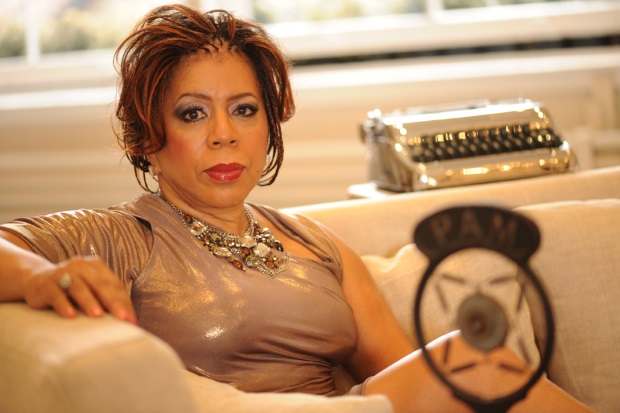 “There comes a time in everybody’s life when you got to stand face to face with the truth,” Valerie Simpson testified on “Can’t It Wait Until Tomorrow,” a single from her Motown debut Exposed (1971). The truth is a constant of Simpson’s work as a solo artist and the songs she wrote, produced, and recorded with Nickolas Ashford. It’s there in each melody she composes and every chord she touches on the piano. It’s in the words she contours with her voice, an instrument of such spirit and passion that it transcends the music scale and touches the divine.

“There comes a time in everybody’s life when you got to stand face to face with the truth,” Valerie Simpson testified on “Can’t It Wait Until Tomorrow,” a single from her Motown debut Exposed (1971). The truth is a constant of Simpson’s work as a solo artist and the songs she wrote, produced, and recorded with Nickolas Ashford. It’s there in each melody she composes and every chord she touches on the piano. It’s in the words she contours with her voice, an instrument of such spirit and passion that it transcends the music scale and touches the divine.

Valerie Simpson has been a galvanizing force in popular music for more than 50 years. Her earliest duo recordings with Nick Ashford date back to 1964 when they released a few singles as “Valerie & Nick” on Glover Records, distributed by Roulette. Forging a writing partnership with Joshie Armstead, they became staff writers at Scepter Records where they penned and produced singles for the Shirelles, Ronnie Milsap, and Maxine Brown & Chuck Jackson, among others. Ashford-Simpson-Armstead scored their first #1 hit as songwriters when Ray Charles’ recording of “Let’s Go Get Stoned” topped the R&B chart in 1966. He delivered another smash with his classic take of the trio’s “I Don’t Need No Doctor,” later recorded by blues-rock acts like Humble Pie and John Mayer, plus Ashford’s solo version on Verve Records. In between, Simpson emerged as one of New York’s most sought-after session singers, lending her voice to everything from Bobby Hebb’s “Sunny” to Dionne Warwick’s Grammy-winning recording of “Do You Know the Way to San Jose?”

Ashford & Simpson flourished at Motown Records upon writing and producing their first sides for the company in 1967. Marvin Gaye and Tammi Terrell recorded a series of duets by the duo, introducing “Ain’t No Mountain High Enough,” “Your Precious Love,” “Ain’t Nothing Like the Real Thing” and “You’re All I Need to Get By” to the vernacular of pop music. After writing songs for top Motown acts like the Temptations, the Four Tops, Smokey Robinson & the Miracles, and Gladys Knight & the Pips, Ashford & Simpson helmed Diana Ross’ self-titled solo debut in 1970, crafting “Reach Out and Touch (Somebody’s Hand)” for the singer and reworking “Ain’t No Mountain High Enough” into a majestic anthem that topped the pop and R&B charts. By decade’s end, they’d produce two more albums for Ross, Surrender (1971) and The Boss (1979), capturing a thrilling dynamism in the singer’s voice.

Simpson’s two solo albums for Motown’s Tamla imprint were stellar showcases for her own vocal prowess. From the haunting “Back to Nowhere” to the gospel-inflected fervor of “Sinner Man (Don’t Let Him Catch You),” Exposed spotlighted the singer-songwriter-producer’s strengths as a lead vocalist and pianist. A year later, she released Valerie Simpson (1972), which spawned a Top 40 R&B hit “Silly Wasn’t I,” plus “Keep It Coming,” a tune that Rufus & Chaka Khan recorded in 1973 on their eponymous debut for ABC.

However, some of Simpson’s greatest moments as a musician, singer, songwriter, and producer would define Ashford & Simpson’s tenure at Warner Bros. Beginning with their full-length debut Gimme Something Real (1973), the duo’s nine Warner albums set new benchmarks of brilliance in their career while “(I’d Know You) Anywhere” became the first of more than a dozen Top 40 R&B hits they’d score for the label. Songs like the lushly orchestrated “Somebody Told a Lie,” “Believe In Me,” “Send It,” “Let Love Use Me,” and “Ain’t a Shame” evidenced a musical sophistication that complemented the duo’s scintillating vocal rapport. While a few of Ashford & Simpson’s earlier songs had appealed to DJs in underground clubs, “One More Try,” “Tried, Tested and Found True,” “Bourgie Bourgie,” “Don’t Cost You Nothing,” and “It Seems to Hang On” traced the advent of disco as a cultural phenomenon, with “Found a Cure” crowning the disco chart in 1979 only a week after their production for Diana Ross on The Boss album had completed its reign at number one.

Capitol Records welcomed Ashford & Simpson to the roster in 1982, ushering in a new era of visibility and commercial success for the duo. Street Opera (1982) and High-Rise (1983) tilled the foundation for Solid (1984), the second gold-selling #1 album of their career. The infectious title track was a pop smash, reaching the Top 5 in more than half a dozen countries and holding the top spot on the R&B chart for three weeks in December 1984. 20 years after their first single, Ashford & Simpson were now hotter than ever and appeared before a television audience of millions during “Live Aid” in July 1985. Performing “Reach Out and Touch” on the telecast, they accompanied Teddy Pendergrass for his first concert appearance since surviving the near fatal car accident that left him paralyzed in 1982.

Real Love (1986) and Love or Physical (1989) rounded out the duo’s contract with Capitol before they released Been Found (1996), a collaboration with Dr. Maya Angelou that also featured Nile Rodgers’ production on “Where We Come From.” The next year, Ashford & Simpson opened the Sugar Bar on W. 72nd Street in Manhattan, building on the popularity of their previous nightclub 20/20. Two decades later, the Sugar Bar remains a celebrated haunt for live music, industry events, “Nick Ashford’s Nuttin’ but the Blues” series, and the club’s popular Thursday night open mic.

In 2002, Ashford & Simpson were inducted into the Songwriters Hall of Fame, an honor that recognized the indelible impact they’d made as lyricists and composers. Previously, they’d also received the Pioneer Award from the Rhythm & Blues Foundation and the prestigious Founder’s Award from ASCAP. Later in the decade, they recorded The Real Thing (2009) live at Feinstein’s at the Regency in New York, revisiting highlights of their catalog as both a recording act and prolific songwriting team.

“Val stands tall even in a land of giants,” legendary composer Jimmy Webb once stated. His words hold true, especially as Simpson continues to honor the legacy of Nick Ashford, who passed away in August 2011. Months after Ashford’s passing, the Soul Train Music Awards founded the “Ashford & Simpson Songwriting Award” while Simpson paid tribute to her late husband and soul mate at the HistoryMakers fundraiser, “An Evening with Valerie Simpson,” subsequently broadcast on PBS. During her tenure on the Board of Directors for both ASCAP and the ASCAP Foundation, she also established the “Reach Out and Touch” Award in Ashford’s memory to assist aspiring songwriters. In May 2014, Simpson herself received an honorary Doctor of Music degree from Berklee College of Music, an honor befitting a woman who’s schooled several generations of vocalists, songwriters, and musicians through her exceptional musicality.

Valerie Simpson is still giving us “the real thing” in everything she does.Her third solo album Dinosaurs Are Coming Back Again (2012) featured her duets with Nina Simone and Roberta Flack, plus an instrumental rendition of “Ain’t No Mountain High Enough” inspired by one of her favorite pianists, Richard Tee. In the years since, she’s remained a vibrant presence onstage, touring solo and also joining acclaimed artists like Terri Lyne Carrington, Dave Koz, and Paul Shaffer. Whether it’s Mary J. Blige’s Grammy-winning interpretation of “You’re All I Need to Get By,” Lil Wayne and 50 Cent’s respective samples of “Benjie” and “Silly Wasn’t I,” Seal and Ryan Shaw’s versions of “I Am Your Man,” or Amy Winehouse’s creative interpolation of “Ain’t No Mountain High Enough,” Ashford & Simpson’s timeless compositions continue to resonate across a wide spectrum of contemporary music.

It all goes back to songs that mirror the truth. When Valerie Simpson promises “It’ll Come, It’ll Come, It’ll Come,” you trust her. When she exclaims “Love will fix it” on “Found a Cure,” you believe her. When she sings “you can’t be nobody’s lover until you’re somebody’s friend” on “Over and Over,” you never doubt her. Play any song that bears Valerie Simpson’s signature and she will inspire awe higher than any mountain.