Happy Birthday Walter and Wallace Scott of the Whispers! 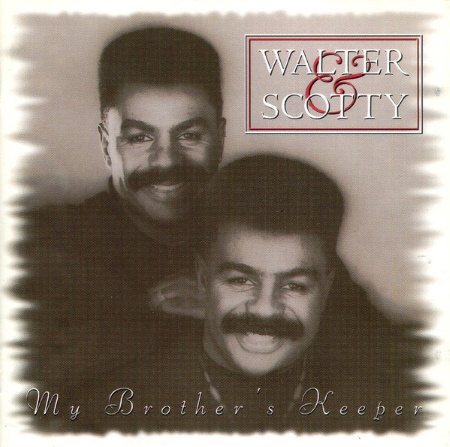 Happy birthday Walter and Wallace (aka Scotty) Scott born September 23, 1943. Twins Walter and Scotty are the lead vocal foundation for one of the all-time great vocal groups, The Whispers, creating now more than a half century of hits.

Happy birthday Walter and Wallace (aka Scotty) Scott born September 23, 1943. Twins Walter and Scotty are the lead vocal foundation for one of the all-time great vocal groups, The Whispers, creating now more than a half century of hits.

Formed in LA in the early 60s, the Whispers have certainly taken a "slow and steady" career course in which they have quietly become one of the most successful modern soul groups.  Consisting of twin brothers Walter and Wallace (Scotty) Scott, Nicholas Caldwell, Marcus Hutson and Leaveil Degree (who replaced departing member Gordy Harmon in 1973), the Whispers first recorded for local LA label Dore Records, hitting the pop and R&B charts with "Seems Like I Gotta Do Wrong" in 1970.  They continued to be a mid level charting act throughout the 70s on the Don Cornelius/Dick Griffey "Soul Train" label but gained momentum toward the end of the decade when Griffey, who was their manager, created his own SOLAR label and worked with the group on their SOLAR debut album Headlights, which scored a moderate with with "Olivia."

After so many years, the Whispers seemed destined to remain a a middling act that would never achieve real large scale international attention.  Then in 1980, Griffey teamed them with upcoming writer/producer Leon Sylvers, and the result was "And the Beat Goes On," one of the most infectious songs of the disco era and the single that thrust the Whispers to the top tier of soul artists.  "And the Beat Goes On" was included on the excellent Whispers album along with two other instant classics, the Caldwell-penned ballad "Lady" and "A Song For Donny," a touching tribute to Donny Hathaway sung to the tune of Hathaway's "This Christmas"  (with lyrics by Whispers labelmate Carrie Lucas).

The 80s brought a string of monster soul chart success for the Whispers, with additional hits "It's A Love Thing," "Keep On Lovin Me" and "Tonight," though crossover success was more limited.  The group appeared to lose steam in the second half of the decade, but a hot dance tune written by then-unknown Deele member Babyface brought the Whispers back, as the excellent "Rock Steady" shot to the top of Pop, Soul and Dance charts.  The group left Solar for Capitol in 1990 and continued to record soul hits through the mid-90s, garnering success with "Innocent," "My Heart Your Heart" and "Is It Good To You."  Sadly, they lost group member Marcus Hutson to cancer in 2000. Also during this period, Walter and Scotty issued their one album outside of the group, the 1993 duet album My Brother's Keeper.

After leaving Capitol, the group recorded a solid, but underappreciated 1997 album of Babyface covers, Songbook Vol. 1: The Songs of Babyface, for Interscope Records.  It was nearly a decade before the issuance of their next album, the self-released For Your Ears Only, a surprise hit that topped the CDBaby independent CD charts for several weeks. In 2009, the Whispers issued their first Gospel album, Thankful, collaborating with Unified Tribe's Magic Mendez as well as Fred Hammond, among others.  The first song, "For Thou Art With Me," hit radio in Summer 2009. The disc was a moderate hit, and the group followed later with a live album.

The Whispers continue to perform both alone and in multi-artist shows around the world, and fifty years after joining together they are still a model for consistency and unity in song, even after the sad passing of Nicholas Caldwell died on January 6, 2016. The Whispers returned in 2020 with the socially conscious single, "How Long," sounding great after all these years, and they are back to touring the world and are working on what they call "some classic, grown folks music" which should be released soon. Happy birthday Walter and Scotty!