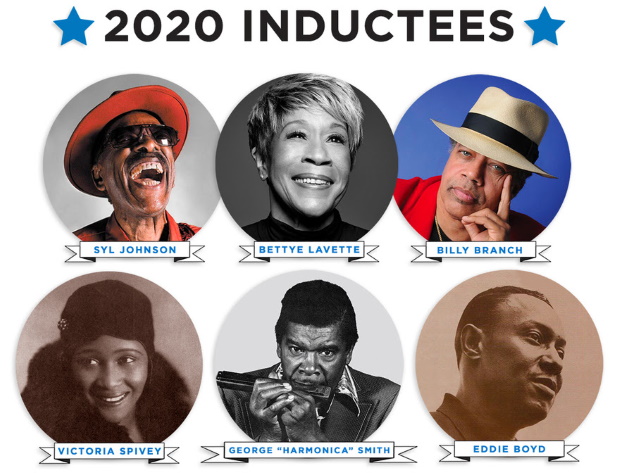 The new Blues Hall of Fame performers aren’t just exceptional musicians, but they also are educators, innovators, entrepreneurs, and activists determined to leave their mark on the world.

Piano-man Eddie Boyd scored several hits in the early ’50s (most notably “Five Long Years”) for Chess Records, but the outspoken Mississippi-born Chicago bluesman, dismayed over racial injustice and record business chicanery, left America in the mid-’60s for Europe, where his career prospered for several decades. Harmonica ace Billy Branch, part of the “New Generation of Chicago Blues,” is a multiple Blues Music Award winner who also has taught hundreds of blues classes around the globe and is a two-time recipient of the Keeping the Blues Alive Award in Education. Powerhouse singer Bettye LaVette finally achieved her much-deserved acclaim in the new millennium after several decades of struggles within the industry, garnering many honors — including several Blues Music Awards — and performing at President Obama’s 2009 inauguration celebration.

Victoria Spivey may be best known to general music fans for including a young Bob Dylan on a 1962 recording session; however, her unparalleled 50-year career began with her breakout tune, “Black Snake Blues,” and included her roles as songwriter, manager, bandleader and label owner. Guitarist Syl Johnson (brother of Blues Hall of Famer Jimmy Johnson) starred in Chicago’s soul scene during the ’60s and ’70s. His funky, often politically charged blues-fueled tunes (like “Different Strokes” and “Is It Because I’m Black”) have made him a favorite for sampling among hip-hop artists. The enigmatic George “Harmonica” Smith, who played with legends like Muddy Waters, Big Mama Thornton and Big Joe Turner, has been widely hailed by blues aficionados and musicians as one of the premier blues harmonicists, and influenced a generation of west coast harp players.

The revolutionary producer Ralph Peer, 2020’s honoree in the Individual (Business, Media & Academic) category, is most associated for his formative recordings in the country music field, but he first did pioneering work in the blues world (including co-producing the Mamie Smith historic 1920 “Crazy Blues” session). Entering the Blues Hall of Fame as a Classic of Blues Literature is Earl Hooker, Blues Master, the insightful biography of the blues guitar giant (and 2013 Hall of Fame inductee) written by French writer/producer/translator, and American roots music authority, Sebastian Danchin.

The Blues Hall of Fame Induction Ceremony, held in conjunction with Blues Music Awards Week, will occur on Wednesday, May 6, 2020 at the Halloran Centre at the Orpheum (225 S. Main St., Memphis). A cocktail reception honoring the BHOF inductees and Blue Music Awards nominees will begin at 5:30 p.m., with the formal inductions commencing at 6:30 p.m. in the Halloran Theater. Tickets, which include the ceremony and reception admission, are $75 each and will be available starting on Tuesday, January 7, as will Blues Music Awards tickets.

Coinciding with the Induction Ceremony, the Blues Hall of Fame Museum will showcase a number of special items representing each of the Hall’s new inductees. These artifacts will be on display for public viewing beginning the week of the BHOF inductions and will remain enshrined in the museum throughout the next 12 months. The Blues Hall of Fame Museum, built through the ardent support and generosity of blues fans, embodies all four elements of the Blues Foundation’s mission: preserving blues heritage, celebrating blues recording and performance, expanding awareness of the blues genre, and ensuring the future of the music.

Museum visitors are able to explore permanent and traveling exhibits as well as individualized galleries that showcase an unmatched selection of album covers, photographs, historic awards, unique art, musical instruments, costumes, and other one-of-a-kind memorabilia. Interactive displays allow guests to hear the music, watch videos, and read the stories about each of the Blues Hall of Fame’s over 400 inductees.

The museum (421 S. Main St.) is open 10 a.m.–5 p.m. Mondays-Saturdays and 1–5 p.m. on Sundays. Admission is $10 for adults and $8 for students with ID; free for children 12 and younger and for Blues Foundation members. Membership is available for as a little as $25 per person; to join visit www.blues.org/