Book Review - "Inside Studio 54" by Mark Fleischman and Denise Chatman 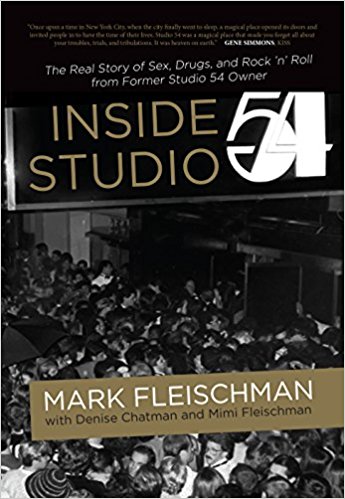 Book Review - "Inside Studio 54," by Mark Fleischman and Denise Chatman

“One night at an SNL party in the Rubber Room, John Belushi complained to me that he was hot and needed some air. ……He showed up in my office and took over the scene dominating the room with his antics…..until Rick James walked up with two absolutely gorgeous black girls and threw a white bag of powder down on my desk and announced, ‘I’m Rick James….say hello to my b****es….LET’S PARTY.’ John was speechless.”

Book Review - "Inside Studio 54," by Mark Fleischman and Denise Chatman

“One night at an SNL party in the Rubber Room, John Belushi complained to me that he was hot and needed some air. ……He showed up in my office and took over the scene dominating the room with his antics…..until Rick James walked up with two absolutely gorgeous black girls and threw a white bag of powder down on my desk and announced, ‘I’m Rick James….say hello to my b****es….LET’S PARTY.’ John was speechless.”

Is the above recollection an outtake from the Chappelle Show? Not quite, but it was a typical evening at the infamous NY nightclub-turned-cultural-hallmark, Studio 54, and one of the many brow-raising and pearl-clutching moments within Mark Fleischman’s fascinating tell-all and biography, Inside Studio 54. An entrepreneur, promoter and club fiend, Fleischman bought 54 around 1980 when its two original owners found themselves behind bars for tax evasion. The journey that landed Mark at the world’s most famous nightclub is the same one that many of its attendees may likely remember…..a love of music, a penchant for drugs and a desire to see and be seen with the biggest and brightest names of art and entertainment.

With his deft, yet vivid narrative flow, Fleischman describes how his well-to-do upbringing and pre-teen trips with his parents to the legendary Copacabana (circa 1960s) cemented his love of blues, R&B, and the swanky nightlife. At Cornell University, while many were either heading to full-time work and taking roles in the family business, he was quickly becoming known for the area’s hottest and hippest frat parties. By his mid-twenties, he ran a 300-room landmark inn with his father, and Frank Sinatra was the first famous patron to grace its Celebrity Walk.

After his first early nightclub success, The Candy Store, got leaned on too zealously by the Mob, Fleischman split his time running restaurants and hotels until seizing the opportunity to resurrect the floundering club’s fate (let’s just say that Steve Rubell and partner Ian Schrager didn’t win friends by reporting to the New York Daily that both “made more money than the Mafia.”). Fleischman renewed the liquor license, the nightclub re-opened and the infamous sex, drugs, rock & roll kept on keeping on.

Depending on which era you were born in, what’s known about Studio 54 comes from a) first-hand experience, b) knowing somebody who knew somebody who _______ at Studio 54, c) the 1990s movie (which Fleischman considers far from accurate), or from d) memoirs and articles like this one. Inside Studio 54, in fact, is one of the most in-depth examinations of the phenomenon to date, from the behind-the-scenes machinations to the eye-popping and mind-bending accounts of over-the-top parties, superstars draped across sofas in VIP lounges, the drugs constantly-in-rotation and enough heterosexual and homosexual sex encounters to make the freakiest of orgies look tame. After all...it was the heady era following the invention of the pill, yet right before the explosion of the deadly AIDS virus. The decadence and depravity were unmatched.

Inside Studio 54 is chock-full of less-than-sober adventures, stunning celebrity accounts, and illustrates an atmosphere too prestigious to ignore, too wild to sustain and ultimately, too over-the-top to believe; “It was a Thursday night and the club was packed. Yul Brenner, Michael Jackson… entered through the Fifty-Third stage into their private party behind the scrim. ...They were all having a good time and then Frank Sinatra and Jerry Lewis walked in. …Michael just sat there in his Royal military-style garb, just staring. Yes, he was the undisputed ‘King of Pop,’ but tonight he was in the presence of the ‘Chairman of the Board’ and comedy royalty.”

Because SoulTracks is a family-oriented site, the racier and risqué-type stories will have to be investigated directly from the pages, but if you want to read about the performance bridge over the dance floor, cocaine-covered party favors, Bianca Jagger’s famous white horse entrance, Prince's visible feud with Rick James, MJ hanging out in the DJ booth, epic live performances that should have been recorded for posterity (!), A-list celebrities handcuffed to one another in plush offices (!!!) and Fleischman’s own debaucheries and personal addiction battles (including running into Andy Gibb while both were in treatment at the Betty Ford Center), all occurring before the invention and intrusiveness of social media…yeah. Gotta get the book.

If you were there at the height of Studio 54’s popularity, Inside's photos and recollections give insight into the cultural hedonism that fueled it all and maybe, could help trigger memories lost in the haze (Mark, a friend and party partner of the late Rick James, freely admits to forgetting plenty -- he didn't include the two co-authors for nothing). Otherwise, if you were a tot back then (like me) or were born decades after its legendary reign, consider Inside Studio 54 a detailed road map to a fabled place and time that shouldn’t be forgotten...or repeated.