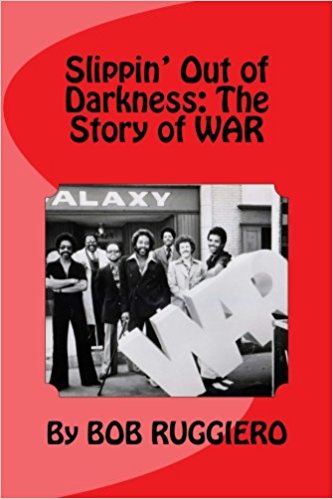 For some time I had been well aware of the long-running legal entanglement and feud that had fractured the great 1970s funk-R&B-jazz band WAR, but I really gained a firsthand taste of its ugliness and silliness when I interviewed founding members Howard Scott (vocals, guitar), Lee Oskar (harmonica) and Harold Brown (drums) on the TRUTH IN RHYTHM show this past summer. The musicians and the interview were fantastic, but in the aftermath I learned that even as a neutral third party it was legally inadvisable to associate them with the WAR name.

For some time I had been well aware of the long-running legal entanglement and feud that had fractured the great 1970s funk-R&B-jazz band WAR, but I really gained a firsthand taste of its ugliness and silliness when I interviewed founding members Howard Scott (vocals, guitar), Lee Oskar (harmonica) and Harold Brown (drums) on the TRUTH IN RHYTHM show this past summer. The musicians and the interview were fantastic, but in the aftermath I learned that even as a neutral third party it was legally inadvisable to associate them with the WAR name.

I was implored to and complied with instead referring to them as being part of their present entity the LowRider Band. Such is the bitter split that for the vast majority of the past 30+ years has kept the WAR organization ongoing with just one original member (keyboardist-singer Lonnie Jordan) in tow while the other surviving players have been locked out due to court rulings in favor of the group’s founding producer and collaborator Jerry Goldstein.

That is a crying shame for a multitude of reasons. It has damaged the band’s legacy in terms of potential Rock and Roll Hall of Fame recognition, having a unified visibility and availability to media, and record catalog treatment. Then there’s also the lost potential earnings and anguish experienced by the band members and their families. Last but not least, it has also given short shrift to fans yearning to see the genuine article on stage and enjoy new music before Father Time makes that impossible.

That messy situation was at least in part to blame for there never having been a book released that chronicled WAR’s musically innovative, highly successful and in many ways tragic story. Talk about a gaping hole in the fabric of documented rock and soul history!

At long last that injustice has been remedied by music writer Bob Ruggiero, who despite considerable obstacles and challenges took it upon himself to see through publishing the lone existing biographical book covering the Los Angeles band’s beginnings, rise, zenith, decline, fade away and splintering. Insightful, thorough, thoughtful, balanced, well organized and engagingly written, Slippin’ Out of Darkness: The Story of WAR admirably and engrossingly covers its subject seemingly to the full extent possible given available sources.

Scott, Oskar and Brown fully participated as did several key people outside of but associated with the band (bassist B.B. Dickerson was incapacitated from a stroke, and saxophonist Charles Miller and percussionist Papa Dee Allen are deceased). However, original leader Eric Burdon, Jordan and Goldstein declined to be involved. It was not for a lack of trying, and to his credit Ruggiero fully acknowledges those shortcomings within and does his best to make up for them through exhaustive research and use of myriad print and electronic media references, including TRUTH IN RHYTHM and FUNKNSTUFF.NET.

Regardless of the circumstances of the book’s genesis and fruition, it would be difficult to name a more compelling act or tale than WAR and that is what ultimately shines through. Aficionados and newbies alike will appreciate how the book details the group’s blossoming from precursor acts the Creators and Night Shift to emerge from L.A. in 1969 as ex-Animals lead singer Burdon’s unlikely backup band and notch the hit “Spill the Wine.” Band members jammed with Jimi Hendrix the night before his death, sold millions of records, shared the stage with dozens of legendary performers, traveled the world and sold out concerts with audiences numbering in the tens of thousands, and became cultural icons.

Among finer points, anecdotes, commentary and analysis, the author spotlights how WAR’s unique and identifiable sound ― marked by deep funk grooves, heavy percussion, Latin rhythms, sax-harmonica horn section, group vocals and unifying messages — helped the band strike out on its own in 1971 to begin a run of hit multimillion-selling albums and singles. All told, the band scored two platinum and seven gold certified LPs, with The World Is a Ghetto being especially notable as 1973’s best-selling album. In addition to that record’s hit title song, other key tracks discussed include “All Day Music,” “Get Down,” “Slipping Into Darkness,” “The Cisco Kid,” “Where Was You At,” “Gypsy Man,” “Me and Baby Brother,” “Why Can’t We Be Friends,” “Lowrider,” “Heartbeat,” “Summer” and “Galaxy.”

Less fun to read about ― although in some ways just as fascinating — is the group’s internal conflicts, mismanagement, waning creativity and record sales, Miller’s murder and Allen’s post-stage collapse death, inevitable demise, and ongoing friction and discontent. It would be a disservice to the WAR story to omit any of those sordid details, but as the book winds down it has the effect of having been on one of the wildest amusement park rides of your life that breaks down, skids and comes to a screeching halt. You then sit for a moment, feel some sadness and disappointment, and then quietly exit the ride. No knock on Ruggiero, that’s just the way it is.

In fact, apparently feeling similarly mournful about his subject, the author titles the book’s final chapter Why Can’t They Be Friends? and imagines a “dream scenario” where everything comes together for a happier ending. The friends reference is certainly ironic, but even more so is the ultimate irony that what was intended to zig against the zag of the peace movement of the late 1960s in choosing the WAR moniker for a band that promoted unity wound up embodying the literal meaning of the word.

Nevertheless, it all adds up to Slippin’ Out of Darkness: The Story of WAR being an absorbing read for any music enthusiast and essential for followers of the band as well as general funk, soul and R&B fans.

Charlotte-based Scott “DR GX” Goldfine is a career media professional, entertainment journalist and critic, and lifelong funkateer. He spent more than a decade as an L.A.-based D.J. and produced/hosted the album reviews TV show Platter Chatter. Goldfine’s most recent enterprises include the FUNKNSTUFF.NET site, Everything Is on THE ONE: The First Guide of Funk book and TRUTH IN RHYTHM video and audio podcast music interview show.