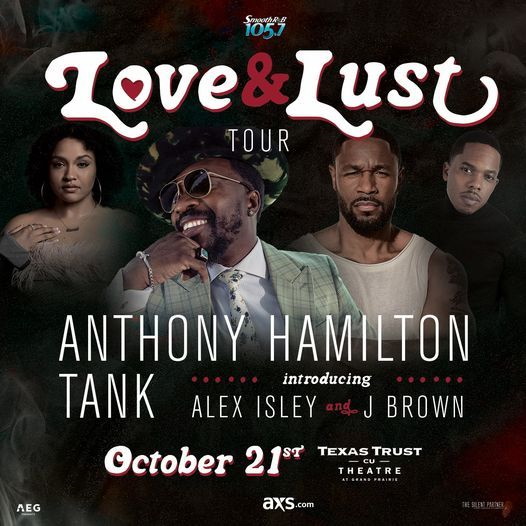 Sexy stripteases, smooth performances and an abundance of Southern-fried soul: that's what a full-capacity crowd of 6K+ enjoyed when J. Brown, Alex Isley, Tank and headliner Anthony Hamilton brought the "Love & Lust" Tour to Texas' CU Trust Theater in Dallas TX on Thursday night (and into twilight on Friday morning).

Sexy stripteases, smooth performances and an abundance of Southern-fried soul: that's what a full-capacity crowd of 6K+ enjoyed when J. Brown, Alex Isley, Tank and headliner Anthony Hamilton brought the "Love & Lust" Tour to Texas' CU Trust Theater in Dallas TX on Thursday night (and into twilight on Friday morning).

Many soul listeners erroneously assume that Anthony Hamilton's stardom began with his signature smash 2003 hit and album, "Coming From Where I'm From," but his journey began back in early 1990s after a series of false starts, unreleased material and short-lived recording deals. The years of grinding, touring, songwriting, and background/cameo vocalist gigs have resulted in a powerful and polished entertainer: with his four-piece band and trio of golden-throated background vocalists, Hamilton regaled the audience with his down-home persona, humble charm and over an hour's worth of hits, often accompanied with nimble footwork that had the crowd cheering him on ("Ay, ay, ay, ay!  Go Ant, go Anthony!"). Fans gathered right under center stage and shadow-danced with the NC native during "Best of Me," "I'm Ready" and "took a ride back through the hood" during "Coming From....." Between Hamilton's buttery trills and ad-libs, ladies swooned with his mashup of Andre 3000's "Prototype" and "I'm a Mess." Anthony's also developed a knack for intertwining old-school classics: "Point of It All" blended effortlessly into Prince's "Adore," "You Made a Fool of Me" segued into The Spinners' "Love Don't Love Nobody" and the heartbroken "Charlene" bled into Bobby Womack's "If You Think You're Lonely Now." His personal bout with Covid in December of 2020 led Hamilton led to drop a  sincere testimony to the fans: "Get the measles, mumps or chickenpox, but PLEASE don't get that. Wear your mask, take your Zinc, eat good food, just love one another y'all."

Tank's time on stage had fans just as thrilled, especially when he stripped off his shades and pieces of clothing after each song ("Sex Music," "B-Day, " "(Expletive) Wit' Me"), gyrating and pumping the air and even watching in silent amusement as a fan jumped up and took a selfie next to him onstage. Songs like "Amazing" were dedicated to his long-time fans ("I've been coming to Dallas for the last 21 years, each time you make me feel at home) and he even told the guys in the audience to "put that pride aside" and "get on those knees" to keep that good woman at home when they mess up: "You ain't a real man yet if you haven't begged the Lord to let her take you back!" Offers of tit-for-tat stripteasing ended on a surprising PG note when the D.C. native brought his kids onstage and let one sing a verse, He also told the audience that his last in-studio release was due next year and the all-but-salivating ladies gathered at the foot of the stage pledged immediate support.

The pair of show-openers, J. Brown and Alex Isley, earned enthusiasm and steady applause for their time on-stage: J. Brown's own well-delivered hits ("Vibe," "Moon") were reinforced by a medley of Case's "Faded Pictures" and Bobby Brown's "Rock Wit'Cha," where he dirty-danced right at the edge of the stage with a very handsy fan. Alex Isley was just as mellow and sophisticated as her four-piece band: listeners marveled at her delicate soprano as she sung "Ask Him," "Mine," "Gone" and "Into Orbit." Both have serious potential and added to the enjoyment of the night.