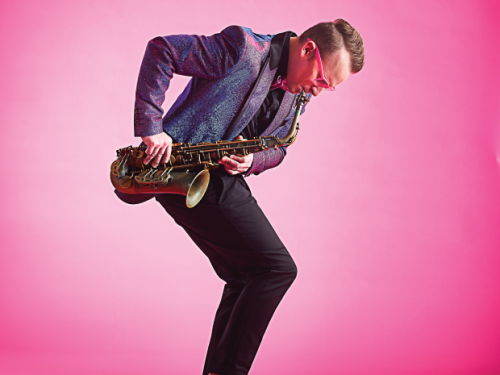 Minneapolis based saxophonist was named the hippest jazz cat by Minneapolis/St.Paul Magazine back in 2007 for a reason. His energetic and passionate performances, innovative blend of genres, explosive sound, one-of-a-kind pink inspired brand/style and zest for life truly earns him this title. Danny has carefully crafted and mastered a combination of Prince, The Minneapolis sound and David Sanborn into a truly unique sound that is instantly recognizable. His truly remarkable career has has earned him 2 Los Angeles music awards, multiple Minnesota Music Award nominations, a cover story on The Jazz In M.E.E. January 2016 issue, 3 solo albums and multiple top 10 charting songs.

After being a side man for many years, Danny decided to step front and center in 2014 launching his second solo album SEXY.FUNK VELVET.JAZZ. In 2016, he released Eruption which earned him 3 radio singles and a Top 10 hit song entitled Reanimation. This album featured jazz legends such as Jeff Lorber, Will Donato and Nils. In the fall of 2016, Danny signed with California based record label Innervision Records and released his first single off the label “Can’t Stop the Groove,” which was a top 10 GrooveJazz chart single and was also picked up by Sirius XM and MusicChoice radio. The song was produced and co-written by Grammy® nominated producer and saxophonist Darren Rahn.