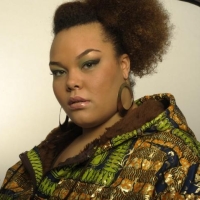 In London , we like to believe that we have a vibrant spoken word and music scene which could hold its own against the likes of those in Atlanta , D.C. and the Tri-State area.  Packed with artists full of promise, and eager to make a name for themselves either by getting a record deal or becoming "discovered" as the next best thing, there is one who has soared above the rest and whose debut project I have been waiting for, for a long time.  She can sing and rap; she writes poetry and has stage presence; she can scat, sing about God and she rocks an afro. No not Jill Scott, this is the South London 's brightest star, FLOetic Lara.

The album Jus Let It Flo opens with the title track, introducing us to FLO and a little bit about who she is.  We are then treated to the jazzy opening bars to "Star Like Aura," and then the first full length song showcasing FLO's beautiful voice. It encourages us all to work on our aura and to have a positive spirit, because it's important what we put out there to others. The next track is a favourite for people who have had the opportunity to see Lara perform. "My Story (part 1)" is a whistle-stop autobiography of FLO, which includes the line about how her afro "defies gravity reaching up to the heavens in all its glory, natural antennas that keeps me grounded". You have to love it! FLO raps over a tight beats about her heritage, growing up, falling into a bad crowd, to turning her life around and becoming a youth ambassador, before the last verse about her spirituality and moral stance; this is FLO at her poetic best.

When rapping or speaking in her London accent you hear a more youthful FLO, who sounds like a lot of young ladies from south London .  But when she sings, you are blown by the mature and confident voice which commands your attention whenever you hear it live.  Whilst at times the piano distracts the listener from the FLO's voice in the Gershwin classic "Summertime," you can't help but strain more to hear FLO's vocal. The only time I found FLO's vocal letting her down was on what I would have expecting to be an emotional explosion, "Still Here."  Given that it was a song about struggling, overcoming and surviving, I was disappointed that FLO did not let rip and really sing about the pain that one has experienced.

There are many highlights on this project. The spoken bonus track "Passionate Poets" reminds FLO's fans that poetry is still in her blood and can't be held down.  "Roaming These Streets," a duet with Lyrical Healer, is an interesting song.  Al though Lyrical Healer raps with passion and determination, its FLO's mature vocal that adds the real excitement to this track.  Asking how she got into the situation of being evicted, having no job, and not wanting to get involved in the hustle, this live jam session track works well.  The languid "Sunday Afternoon" sounds exactly like what a Sunday afternoon should be: relaxed and easy. FLO says "it's a Sunday afternoon/we chilling/taking time to wrap up from the week", in what is almost like an interlude, but exactly the respite needed before we are mesmerised with jazz ballad "My Love Is Al ways True."  Transported from her live set, FLO subsumes the listener with more imagery than a Laura Esquivel novel.  Ladies take note, this track is how you bamboozle your man and get everything you need.

FLO shows her influences throughout this project.  There is some Jill Scott, some Badu, some Floetry, and some Ella, however despite all this FLO maintains a London sound.  This is a very good debut project from someone we should be watching out for in years to come.  She's already had a track on British film soundtrack, been showcased as a youth ambassador, and held down a regular slot at the world famous Smollensky's On The Strand, a famous jazz lovers eatery in London .  Could there have been some polishing off on the production side? Yes. Could there have been more of a showcase of FLO's musical versatility? Yes. Would you be disappointed if you pick up this album? No.  Whether you are purely interested in hearing what London produces, or whether you want to hear heartfelt songs and poems, you will enjoy this album.  FLOetic Lara's future is bright, and you would want to be able to catch this star in her ascent.   Artists like Sade, Julie Dexter, Hil St Soul, Omar have shown their sound and style can successfully translate abroad.  I similarly hope that FLO's sound will be another name we can add to that list in the near future. Recommended.