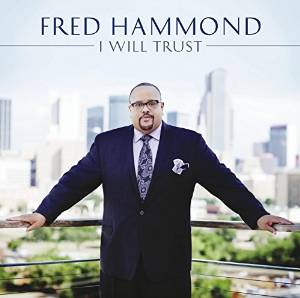 Click on CD cover
to listen or purchase
http://www.amazon.com/I-Will-Trust-Fred-Hammond/dp/B00NU7JFRY/ref=as_sl_pc_tf_til?tag=soultracks-20&linkCode=w00&linkId=XESMLGYHV4SGEQOZ&creativeASIN=B00NU7JFRY

For more than 30 years, Fred Hammond’s ministry has been his music. Hammond, who has released his latest album I Will Trust, used music to spread the gospel starting from the time he played bass and sang backing vocals with The Winans, through his tenure as founder and member of Commissioned and as a solo artist with his choral ensemble Radical For Christ, and most recently as one fourth of the powerhouse vocal group United Tenors.

For more than 30 years, Fred Hammond’s ministry has been his music. Hammond, who has released his latest album I Will Trust, used music to spread the gospel starting from the time he played bass and sang backing vocals with The Winans, through his tenure as founder and member of Commissioned and as a solo artist with his choral ensemble Radical For Christ, and most recently as one fourth of the powerhouse vocal group United Tenors.

In a recent interview, Hammond said that music is his means of witnessing and spreading the gospel. He’s not the type of person who can go door to door or stand on a street corner and evangelize. That revelation will be surprising to those who have seen Hammond perform live because he throws himself fully into performing, praising and evangelizing whenever he steps on the stage. Hammond may have to make some adjustments to his live show as a result of the knee surgeries he underwent in recent months, but the artist retains the passion, power, energy and creativity that have historically marked his output on I Will Trust.

Hammond’s music is rooted in the biblical based church teachings that he has received from his youth. His musical influences, however, are wide ranging and include traditional choral based gospel, the R&B infused gospel of the Hawkins family, the funk of secular bands such as Earth, Wind & Fire and hip-hop artists such as Tupac Shakur.

All of those influences can be heard in the tracks on I Will Trust. Hammond also employs his musical story telling gifts to put a contemporary gospel music spin on two pivotal moments from the early church. “Lord Have Your Way” is a gospel ballad in which Hammond uses Christ’s Garden of Gethsemane prayer for deliverance and ultimate acceptance of his fate as the starting point for a song that encourages listeners to allow God’s will to work in their lives

“It’s Only The Comforter” is a contemporary Christian/rock cut that finds Hammond putting a modern storytelling spin on the biblical account of endowment of the Holy Spirit on the disciples that is found in Acts 2. Hammond aims to show listeners how biblical history can be applied to their lives. The Holy Spirit was the comforter that gave the disciples the spiritual insight and strength to overcome the challenges and persecution they faced in establishing the early church. This track reminds listeners that the Holy Spirit provides modern day disciples with spiritual insight and power to overcome.

The title track must serve as a moment of special pride for Hammond because this Christian folk/rock ballad pairs him with his daughter Brieann. Hammond’s assertive and seasoned vocals meld well with his daughter’s youthful sounding soprano on a track that takes its message straight from Proverbs 3:5-6. “I will not lean on my understanding/But with my whole heart/Here’s what I’ll do/I will trust/In the name/Of the Lord,” the two sing in the tune’s hook.

Hammond’s ability to repurpose the production techniques heard in contemporary and classic R&B, funk and hip-hop have long been best realized on his up-tempo numbers, and that trend continues on I Will Trust. “Let’s Go To the Water,” merges EW&F horns, with the kind of funky bass line that was a mainstay of 70s and early 80s funk along with traditional gospel choral arrangements. “It’s Mine” sports a nu-soul arrangement with Hammond’s vocal code switching between his powerful, throaty vocals to a twangy rap delivery that might remind some of Tupac.

Hammond ends I Will Trust with “I Owe It All, a tune that proves that no matter how far Hammond explores those genres that flow out from the gospel tree, this artist will always find his way home. This is a number that features call and response between Hammond and the choir, all backed by a gospel/blues backed musical arrangement.

Hammond’s work with The Winans, his time with Commissioned and this 20 plus years as a solo artist have put the bassist, vocalist and songwriter at the forefront of every major move in recent gospel history. I Will Trust showcases Hammond’s ability to bridge the gap between cutting edge and classic while maintaining credibility with the younger generation and the traditionalists. It is another triumph for an artist whose career has been full of triumphs. Highly Recommended