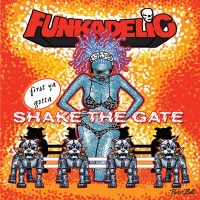 “It’s been 33 years since a legitimate Funkadelic record, The Electric Spanking of the War Babies, has been out. A lot of it is from the band, but I also have everybody from my kids and grandkids to Sly Stone, Kim Burrell and El DeBarge on there. It’s a package!!!!”

First You Gotta Shake the Gate