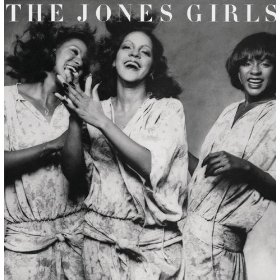 Okay, we'll admit it. We absolutely loved The Jones Girls.  The were beautiful and when they sang together it was something to behold.

Okay, we'll admit it. We absolutely loved The Jones Girls.  The were beautiful and when they sang together it was something to behold.

Born and raised in Detroit in a gospel singing family, the Jones Girls spent the better part of the 60s and 70s as sought-after backing vocalists, first regionally and then on a national basis. Their attempts to break through as a singing group on a number of smaller labels (including a brief stint at Curtis Mayfield's Curtom label) failed, and they seemed destined to spend their careers harmonizing behind bigger artists. However, while serving as Diana Ross's backing group during a mid-70s tour, the girls were "discovered" by Kenny Gamble and were signed to Gamble & Huff's Philadelphia International Records.

They came out smoking on PIR with their eponymous debut album and the infectious dance single "You Gonna Make Me Love Somebody Else," which stormed the pop, soul and dance charts. They followed with the beautiful ballad, "We're A Melody," a prototypical Philly song with sophisticated arrangements wrapped around their wonderful harmonies.

Both drop dead gorgeous and talented, the Jones Girls were individually accomplished singers; but together, their voices were absolutely heavenly. And at PIR they found the perfect match in the melodic writing and lush production that Gamble & Huff and Dexter Wansel/Cynthia Biggs provided them. Their second and third PIR albums were gems. At Peace With Woman and Get As Much Love As You Can featured a number of now classic cuts, including the club favorite "Nights Over Egypt," the sassy "I Just Love the Man" and a timeless cover of the Stylistics' "Children of the Night."

One of their hits that showed off the girls' harmonies -- and some sass -- was their 1980 single, "I Just Love The Man." And they made a music video that is just a fun as the song was. We love it and we think you will too. Check out "I Just Love the Man," our latest SoulTracks Lost Gem