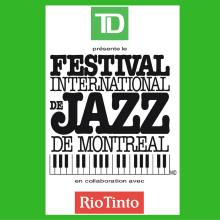 Publisher's Note: SoulTracks Video Countdown Editor Ann Marie Collymore, aka Soul Afrodisiac, will be on assignment this week at the Montreal Jazz Festival, and we'll be posting AMC's reviews and news from there all week. Enjoy!

Publisher's Note: SoulTracks Video Countdown Editor Ann Marie Collymore, aka Soul Afrodisiac, will be on assignment this week at the Montreal Jazz Festival, and we'll be posting AMC's reviews and news from there all week. Enjoy!

In his first headlining show at the Montreal Jazz Festival, producer, instrumentalist and artist Terrace Martin was our first stop for the festival run. We were all very curious to see how the show would take form. Would he touch on his beat laden hip hop tracks? Or would he solely focus on his instrumental pieces? From To Pimp A Butterfly, Good Kid, M.A.A.D. City and Here My Dear, Martin has worked on albums that have left a significant influence on our souls. From hip hop to trumpet immersed instrumentals, there are many of his pieces that resonate with us. As he stated during the show, “I make music for the heart. It lasts longer than when it’s made solely for the ears.” and during his entire set, he made sure to drive that sentiment home.

Martin opened the show with a blessing of sorts, a verse of “Amazing Grace” poured out of the speakers and over a hushed crowd. He wasted no time at all, turned up the volume and it was time to ‘turn up”. As Martin stated, “Y’all ready to turn up? You can be jazzy, but you can be jazzy and exciting.” The man was no doubt ready to party. Crescendoed drum runs, solid piano solos, and a guitar and bassline that wouldn’t quit, added to the ambiance and atmosphere. “If These Walls Could Talk”, “For Free” and “Tribal Dance” were all carefree jam sessions that had attendees fiercely bobbing their heads in unison with each drum kick. Aside from his awe inspiring band, Martin’s weapon of choice was artist Rose Gold from Baltimore, Maryland. Her demure and velvety vocals were exceptional on “Real” and “Think Of You.”

He went back to his roots by taking us for a symbolic ride on Crenshaw through “Bromali”, a track accentuated with a Donny Hathaway sample, and after an attendee shouted out for him to play some MJ he also visited and jokingly teased us with a snippet of Michael Jackson’s “I Can’t Help It.” “I’m not playing the entire song, but I had to show y’all that we do know our sh*t!” Of course, that delighted the audience and he went on to lay it down for the rest of the evening.

For Martin, it was imperative that the soiree be a space where attendees were swept up in the moment. He wanted everlasting memories to be made in this setting. The focus was to correlate the feeling that resounded with each ticket holder to the music being performed throughout the show. As he alternated between piano and saxophone, it was mesmerizing to watch as each band member delicately took their time and bodied each song with their own solo. Martin’s cheshire smile, comedic sidebars and Los Angeles disposition made way for a show that was equal parts educational, spiritual, community driven and artistic.

Los Angeles rapper, producer and artist Terrace Martin has been on the tip of everyone’s lips for the past few years. Before his work on Kendrick Lamar’s To Pimp A Butterfly, his journey in music began with the melodious sounds of the ivories at the tender age of 6. Fortunate for us, the saxophone came calling a mere 7 years later, and I guess it would be safe to say that the rest is history.

It was Martin's sonic cuts and soulful grooves from the 2010 EP Here My Dear that undeniably caught everyone’s attention. It became a hit with soul, hip hop lovers and critics alike. Since then, Martin continues to release music that would have unequivocally made his hero, the late John Coltrane, proud. He’s a risk taker, an envelope pusher, an artist.

He flows effortlessly between rapper, and instrumentalist. And his producer credits are surely boast worthy - Quincy Jones, Kendrick Lemar and Pete Rock to name a few. Tonight at the Montreal Jazz Festival, Terrace Martin will be hitting the Club Soda stage and I am eagerly anticipating what he has in store. I’m sure it will be all worthy of jazz gods Miles Davis, Grover Washington Jr and Charlie Parker et al. “I started producing hip hop tracks because it was the music of my time. I never lost my love for jazz.” Martin says. Indeed, he hasn’t. We hear it within every musical note and fold.

I am secretly hoping that a version of “Poetic Justice” will bellow through the sound system, but only time will tell. Montreal is certainly in for a treat tonight! I’ll have the concert review ready for your reading pleasure tomorrow.