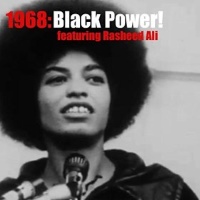 Click on CD cover
to listen or purchase
https://www.amazon.com/1968-Black-Power-feat-Rasheed/dp/B01EIUM0P0/ref=as_sl_pc_tf_til?tag=soultracks-20&linkCode=w00&linkId=ELDX6JFJJKEPJC7E&creativeASIN=B01EIUM0P0

Rasheed Ali’s album 1968: Soul Power provided listeners with a 200,000 mile view of life on earth and what transpired in that tumultuous year. Call it the macro view of life in America provided by a historian providing commentary from a time machine hovering high above some city in urban America.

Rasheed Ali’s album 1968: Soul Power provided listeners with a 200,000 mile view of life on earth and what transpired in that tumultuous year. Call it the macro view of life in America provided by a historian providing commentary from a time machine hovering high above some city in urban America.

On 1968: Black Power, Ali’s second installment in his three part musical trilogy that deconstructs that year, the artist takes a decidedly micro approach. This album defines the concept of black power in a way that places the focus on personal empowerment, self-love and the mental uplift rather than political upheaval. In some respects that approach may be less viscerally satisfying. 1968: Black Power doesn’t have the red meat tracks such as “24/7” that made its predecessor one of the more compelling records of 2015. Look, fighting The Man is always going to be more cathartic than engaging in the type of introspection that Ali brings to 1968: Black Power.

However, self-love was a much a part of the story of the late 1960s and early 1970s as the fight for fair housing, voting rights and the end of the Vietnam War. When black people allowed Africa to reclaim their hair or to even allow themselves to be identified as black rather than Negro, that represented a shift in mindset that Ali captures on tracks such as “Dark Skin Girl” and “In My World,” a cut that sports a bouncy bass line and the use of call and response in the hook reminiscent of the work that The Intruders were doing in 1967 and 1968. More importantly, both tracks find Ali lavishing lyrical attention and love on the black woman. Ali makes that point most clearly in the Afro-Latin tinged “Dark Skinned Girl”: “When she’s living in the white world/She’s invisible/But when she’s living in my world/She’s beautiful/Dark skinned girl.”

While the tracks on 1968: Soul Power have the feel of debates that might have taken place in college lecture halls or television public affairs shows, the cuts on 1968: Black Power sound like conversations that take place around family dinner tables, in cars or even within the mind of a person having an inner debate. On the hard grooving “Family” Ali reminds listeners that the definition of that structure evolved in the 1960s. People referred to black folks not of kin as brother and sister. Politically, it was a sign of solidarity showing that blacks were connected by experience even if not blood. Still, as the historic bonds of family and church began to fry in the increasingly urbanized black community, young people sought familial connections in other groups, so when Ali sings “who is your brother/who is your sister/Sometimes your best friend is connected to your heart and soul/Your flesh and blood can treat you so cold,” it is an acknowledgment that family became an elastic term during the 1960s.

A  track such as “”Fly Like A Bird” could tell the story of a prisoner who uses wisdom to free his mind from its cell, or it could be  students learning the truth about black history to free themselves from the prison of self-doubt and self-loathing. The James Brown funk that Ali unleashes in “Take It Easy” finds him playing mentor to a young man and woman tempted by the fast life of the streets: “You wanna be grown/On your own/You wanna get paid/And be self made/Get rich quick/Gotta be slick/It’s a three part scheme/The American dream.”

1968: Soul Power takes on the power structure while 1968: Black Power stands as a call to transform from within. From the outside, micro may not seem as radical as macro. However, reckoning with each other and within ourselves can lead to a deeper understanding and that can be radical in its own way. Recommended.