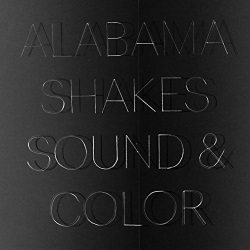 Click on CD cover
to listen or purchase
http://www.amazon.com/Sound-Color-Alabama-Shakes/dp/B00TEJB8JK/ref=as_sl_pc_tf_til?tag=soultracks-20&linkCode=w00&linkId=NYUUKS6QS3NQYSAW&creativeASIN=B00TEJB8JK

If you’ve never heard of Alabama Shakes, don’t feel totally bad. To set the record straight, it’s not some newly drummed-up Southern spiced milkshake. They are a rock band hailing from the small town of Athens, Alabama, only minutes away from Muscle Shoals – that rustic oasis known for birthing the organic soulful sound archived on classic R&B records by Wilson Pickett, Clarence Carter, Etta James and Aretha Franklin in the 1960s. Since the release of Alabama Shakes’ debut LP, Boys & Girls (2012), the road to success has been quite remarkable.

If you’ve never heard of Alabama Shakes, don’t feel totally bad. To set the record straight, it’s not some newly drummed-up Southern spiced milkshake. They are a rock band hailing from the small town of Athens, Alabama, only minutes away from Muscle Shoals – that rustic oasis known for birthing the organic soulful sound archived on classic R&B records by Wilson Pickett, Clarence Carter, Etta James and Aretha Franklin in the 1960s. Since the release of Alabama Shakes’ debut LP, Boys & Girls (2012), the road to success has been quite remarkable.

Before getting a Grammy nomination for Best New Artist in 2013, they hit the road and paid their dues on the musical festival circuit, doing what any smart struggling band should do. Rolling Stone profiled their every step, even crowning their lead single “Hold On – a gooey three-minute slice of mid-tempo, gospel-powered heaven using simple guitar chords from the Creedence Clearwater Revival handbook – with the coveted ranking of No. 1 on their list of Best Songs of 2012. The one holding everything together is guitarist and lead vocalist Brittany Howard. Often described vocally as a new-age Janis Joplin, the biracial female singer is an unorthodox powerhouse that blends the temperament of Tina Turner with the dexterity of a sanctified gospel evangelist. On the band’s first record, she had been singing the good news to decent blues-coated garage rock jams. Many of them were satisfying exercises, but lacked depth, pop sensibility and lyrical finesse. It was more of an introduction to their long list of legendary musical influences. Still, appearing like a veteran nostalgia act, while also sounding like the Ghost of Rock Music Past, is an uncomfortable label for a relatively young band hungry for a commercial breakout and their own undeniable identity. A follow-up to Boys & Girls was mandatory business, along with some much needed improvement on that media hyped debut.

On Sound & Color, the band this time emerges with a very distinctive record, one that feels organic, explorative and bombastic, and, at times, sloppy. It does away with the ordinary sepia tone of their debut by offering a new vision of rock ‘n’ soul. They also improve on things lyrically while jumping from lovers’ tales of emotionally-driven chaos (“Don’t Wanna Fight”) to rapturous poetry (“Gemini”). The opening track, also the album’s title track, opens with 60 seconds of calming vibraphone dripping in a universe of Jim James’ euphoria. Then a street beat using The Roots-esque swagger kicks in, so does complimentary harmonies and Howard’s purpose-driven pleading (“I wanna touch a human being”). Then enters Rob Moose’s cascade of strings that invades the closing seconds of the song using sharp paranoiac jolts, right when Howard drops her own share of enigmatic revelations: “Ain’t life just awfully strange.” In this rare moment, Alabama Shakes has beautifully blended alt-rock with remnants of neo-soul. Although way too brief, this three-minute performance sounds as if the band has taken a bite off of D’Angelo’s “messianic” apple. Thankfully, the imperial introduction to Sound & Color continues onward into the next three tracks: “Don’t Wanna Fight” struts an unbreakable edgy riff and a falsetto-powered sing-a-long chorus; “Dunes” plays up the band’s infatuation for Southern rock; while “Future People” sounds like leftovers from the Black Keys’ brilliant BrothersLP. When the band kicks out the soulful rock-blues ballad “Gimmie All Your Love,” they easily uncover their magnum opus. Big staccato guitar and loud drums atop Howard’s theatric belting decorates this glorified Prince slow jam. Unlike anything they’ve ever encountered, Alabama Shakes explores the realm of sexual bravado and succeeds in their pilgrimage. Halfway in, the tempo shifts into a Memphis soul exercise decorated with fuzzy guitar solos and Ben Tanner’s important organ before returning back to its original form.

Not everything aboard Sound & Color matches the roar of the album’s fortunate standouts, particularly on its second half. The sparse instrumentation of “This Feeling” sounds like it is still in demo mode, while the punk sounds and Howard’s distorted lo-fi vocals on “The Greatest” feels way too weighty with experimental self-indulgence. But, when the band pulls out “Gemini,” a seductive reverb-heavy six-minute ballad dripping with the confection of Isaac Hayes’s symphonic soul and D’Angelo mystery, they’ve beheaded any sign of a sophomore jinx. Alabama Shakes not only bettered and improved their musical palette; they’ve also created the perfect bridge from last year’s Black Messiah. Devout soul fans apprehensive to anything rock will alter their opinion much like black hipsters did with Steely Dan in the ‘70s. Rock audiences unfamiliar or even befuddled by the heavy splendor of Black Messiahwill be able to digest this, and will find themselves wanting more. Critics will look back at this moment as rock’s necessary segue into ethereal psychedelic soul. Jim James did it before, but Alabama Shakes may have done it better. Highly Recommended.