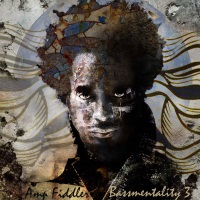 Click on CD cover
to listen or purchase
http://ampfiddler.bandcamp.com/album/bassmentality-3
…

Some creatives are like mad scientists, never satisfied or settling into a single story. Sometimes their experimentations with texture, sound, and effect create wonderful masterpieces that defy expectation and delight the soul at the heights human ingenuity can climb. Other times, the artistic trials result in head scratchers that can make one wince and hope for better next time, while still trusting the talent of the chooser. The third installment in the Bassmentality series by underground Detroit legend, Amp Fiddler, has a bit of both. When the chemistry congeals, everything is gravy. And when it doesn’t, that gravy is as lumpy as the bumps on the back of an Néstle Crunch bar.

On his third release in a year and a half, the singer, songwriter, and producer of Bassmentality 3 works to identify the next evolution in funk, by incorporating elements of electronica, hip hop, house, and good old fashioned soul to the mix. With his latest, there are even elements of rock, as with the incredible “All In A Dream.” Fiddler is one of a select group of exemplary contemporary artists who have multiple musical movements in their work, instead of just the usual verse, chorus, verse, chorus, bridge, vamp out of most songs. The transitions feel organic and fresh on cuts like “Funny When” and “All In A Dream,” the latter of which includes a bit of psychedelia cut against some intricate percussion work, contributing to the dreamlike quality the lyrics describe. Likewise, the free-floating “Funny When,” perhaps the most sparkling gem of this ocean, has the most engaging elixir of experimentation in lyric, music, arrangement, and performance in this otherwise hodgepodge collection.

The rollicking “Nothing Can Keep Me” is another highly transitory work that never comfortably settles into the predictable, with its liberal use of distortion effects and Fiddler accessing the rougher side of his rebel yell. It doesn’t go down easy, but its complexity admirably coheres with an apparent artistry. The whole thing seems to be held together by a bassline that lends to a sense of continuity on its schizophrenic journey. The question is whether it’s avant-garde is something you want to hear on repeat.

The answer to that question for the far less interesting “Energy” is a resounding “no.” As the dragging, repetitive cut suffers from too much cooking in the kitchen, burning away any further interest one has in ever hearing that song again. To name a song “Energy” that has none feels like an exercise in irony that here feels unintended.

The more entertaining and accessible “Send A Message – Yam Who Edit” is the most like the danceable material on the utterly sublime Bassmentality 2, the high point in the series to-date, but the shorter version is preferable over the near 10–minute endurance test that is the ‘80s funk and house 12-inch of “Send A Message Yam Who’s Boogie” version. On the long version, let’s just say I failed the test.

Luckily, the alchemist Fiddler doesn’t entirely fail the chemistry exam that is Bassmentality 3, but there are a few occasions that he comes close to blowing up the lab with one too many ingredients. Modestly Recommended.