Aretha Franklin - A Brand New Me: with the Royal London Philharmonic (2017) 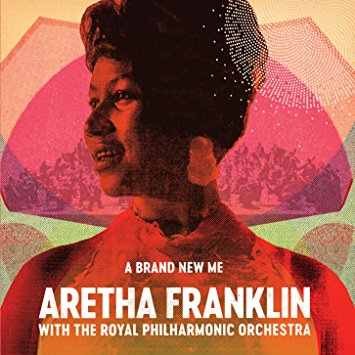 Aretha Franklin - A Brand New Me: with the Royal London Philharmonic

Aretha Franklin - A Brand New Me: with the Royal London Philharmonic

How do you improve on a classic? This is the challenge UK producers Nick Patrick and Don Reedman and arrangers Chris Walden, Steve Sidwell, and Robin Smith took on in developing fresh orchestrations around some of the biggest hits of Aretha Franklin’s Atlantic Records gold and platinum run from 1967 to 1979 (though the song selection stops roughly around 1974, before Aretha’s brief Sparkle comeback in ‘76). Released by Rhino Records with the diva’s blessing, the project reimagines Franklin’s prime as if produced by the wall-of-sound of Phil Spector or the soulful sophistication and cinematic elegance of Gamble & Huff. While Franklin only recorded one original soundtrack for the Blaxploitation era through the 1976 Curtis Mayfield produced Sparkle, listeners would be forgiven for mistaking A Brand New Me… as being a film score from that much-vaunted era. Not so much as something new, certainly not “brand new,” but as something refreshed. And, that too is alright!

Symphonic versions of great soul and pop songs may always sound like a good idea, but don’t always translate well when done. The symphonic albums of Sting, Alain Clark, and even George Michael failed to be as emotionally impactful as their original studio recordings with the possible exception of Michael’s now classic take on “Brother Can You Spare A Dime.” Others like Laura Mvula and Bernhoft in more recent years, found ways to elevate already zenith level material through panoramic orchestrations that made everything a little bigger, fuller, and more present in the process. It’s painstaking work that heavily depends on the quality of the arrangements, even more than the orchestra itself (which rarely is anything less than splendid), and on whether the singer and his or her emotional truth is swallowed whole by brass and strings. Perhaps because Patrick and Reedman didn’t have the original, isolated vocal tracks to work from that there wasn’t a wholesale reimagining of every song in the way that house music producers have over the last two decades with such artists as Nat King Cole, Billie Holiday, Nina Simone, and Shirley Horn. This works both for and against A Brand New Me….

The biggest hits remain largely intact with the orchestra playing a game of get in where you fit in, on bridges, openings, and vamp outs. Opening with epic strings that are quickly dispensed with until the bridge, the brightened “Respect” keeps its rhythm section and background vocals so firmly intact, that one might have the urge to revisit the original to make sure that what they just heard wasn’t merely a remastering until the bridge brings all the instrumentation up exponentially. “Think,” the opening track, makes its changes known upfront by extending the opening by 30 or so seconds before finally yielding to the original cut and then re-emerging through heavier string support on the choruses. This happens on several cuts in ways that don’t detract (with the exception of the too clean, almost soul-stripped “Don’t Play That Song for Me”), far from it. The producers certainly offer a new shine to their classic proceedings, but perhaps not enough so for listeners to feel that the effort was worth it more than say a simple, higher level remastering of the original tracks for audiophiles.

Where the album shimmers as something worth visiting as more than another “greatest hits” package is when it does take a heavier production hand and isn’t quite so reverential to the original material (or hand-tied given the loss of the original Atlantic multi-tracks to a fire decades before). A formerly minimalist cut like “Oh Me Oh My (I’m A Fool For You Baby) becomes a gauzy, Douglas Sirk-directed dream floating on a cloud in a show of sentimentality that only the finest of orchestrations can pull off without resorting to schmaltz. Similarly, the opening of “I Say A Little Prayer is so layered and lush, it almost feels like it’s going to become a disco number before slipping into the familiar melody, but here the light suppression of the song’s rollicking brightness subdues it into feeling almost melancholic. Very delicate, yet exquisite work there. Meanwhile, the moody “Border Song (Holy Moses)” almost feels like a wholly new release from Franklin with this new arrangement that takes its smoldering time before getting to some light funk and rich cathedral meets ol’ school gospel undertones. The enhanced background and doubled vocals noticeable throughout the project are perhaps most effectively used here.

Sometimes the producers’ feather touch and respect for the original is warranted, as with the Stevie Wonder-penned “Until You Come Back To Me” from the fatally underrated Let It Be Me and Franklin’s own “Angel” derived from the Quincy Jones’ produced Hey Now Hey (The Other Side of the Sky), albums that marked what is widely considered the beginning of Franklin’s commercial decline on projects that are vocally among her most stunningly performed. If this album helps to bring new attention to cuts like these from a new generation of listeners who might not understand why Aretha Franklin has been the undisputed Queen of Soul decade after decade then perhaps the Herculean effort to orchestrate Franklin has been worth it after all. Recommended.