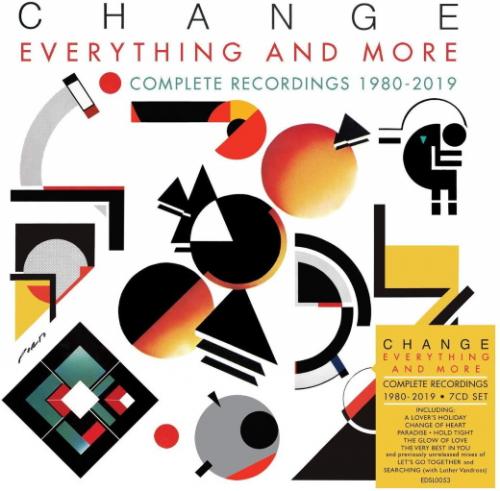 Inspired by the eclectic funk strains which Nile Rodgers and Bernard Edwards cultivated in the late 1970s with disco-soul collective Chic, producers Jacques Fred Petrus and Mauro Malavasi—along with songwriters/arrangers Davide Romani and Paolo Gianovio—built a distinctively compact, elegantly soulful sound with the studio group, Change. Tailored for the dancefloor yet holding unmistakable appeal for R&B radio listeners, the team, together with vocalists including Luther Vandross, Jocelyn Brown, Deborah Cooper, James Robinson, and Rick Brennan, dispersed a steady flow of groove-alicious, melody-rich LP’s between 1980 and 1985.

Inspired by the eclectic funk strains which Nile Rodgers and Bernard Edwards cultivated in the late 1970s with disco-soul collective Chic, producers Jacques Fred Petrus and Mauro Malavasi—along with songwriters/arrangers Davide Romani and Paolo Gianovio—built a distinctively compact, elegantly soulful sound with the studio group, Change. Tailored for the dancefloor yet holding unmistakable appeal for R&B radio listeners, the team, together with vocalists including Luther Vandross, Jocelyn Brown, Deborah Cooper, James Robinson, and Rick Brennan, dispersed a steady flow of groove-alicious, melody-rich LP’s between 1980 and 1985.

While the seven albums found on Edsel Records’ new Change box set, Everything and More: Complete Recordings 1980-2019, have all found their way on to various CD reissues prior, it’s indeed a lovely experience to take in (almost) all of the work as a whole, tracing the sonic strides made from the organic rhythm patterns and full string sections on the group’s early LP’s to the synth-funky finesse displayed on its later discs.

Change’s first album, 1980’s The Glow of Love, was perhaps the most symbolic of its time—offering four club-length tunes led alternatingly by then-rising vocal powerhouses Vandross and Brown, plus one chorus-driven entry and a thematic instrumental track. From this LP came the fuel which would shortly thereafter catapult Vandross into superstardom, via a spine-tingling delivery of Romani’s majestic title song. Additionally, Brown, who’d already fronted the classic disco number, “I’m Caught Up (in a One Night Love Affair),” furthered her reach on key tracks “It’s a Girl’s Affair” and the sassy and classy “Angel in My Pocket.”

1981’s Miracles fell a tad short of the consistency found in its predecessor, but was not lacking for standout gems. In fact, the long-player’s opener, “Paradise,” is arguably the most resolutely enchanting song of all Change’s catalog. Diva Gray’s effortless performance atop the sterling foundation provided by drummer Terry Silverlight, bassist Romani, guitarists Gianolio and Doc Powell, and pianist/synth player Malavasi fits like a glove, provided extra warmth by the flawless backing chorus complementing her treatment of the celestial melodies. The follow-up single, “Hold Tight,” contrastingly, proved to be one of Change’s most formulaic selections; but solid funk, rich arrangements, and memorable melodic qualities abound in key cuts “Heaven of My Life” (there’s no question in this critic’s mind that pop outfit Kajagoogoo nabbed the bassline for its 1983 hit, “Too Shy”) and the title track—both performed with a striking combination of smoothness and fervor by Robinson.

Change started to definitively embody its name both on the inside and out with 1982’s Sharing Your Love. Adding female vocalist Deborah Cooper (who would stay with the band for the remainder of its ‘80s run), as well as bassist Timmy Allen, guitarist Vincent Henry, keyboardist Jeff Bova, and percussionist Rick Galwey, the group began its transition from a disco-leaning act to an R&B-fueled collective. Cutting-edge programming appeared in the mix—albeit in a way that preserved the integrity of the core sound, and ballads comprised almost half of the album. While the lead single, “The Very Best in You,” preserved the feel of earlier hits (Robinson’s lead even bearing some influence of Vandross, whose solo career had since taken off via “Never Too Much”), the follow-up, “Hard Times (It’s Gonna Be Alright),” was bolstered by a decidedly grittier groove and streetwise lyrics (co-penned by backing vocalist Fonzi Thornton, who provides thorough insight into the Change story in the liner notes found within the box set’s accompanying booklet).

Although she’s rarely mentioned in conjunction with Change, esteemed theater and TV actress Roz Ryan supplied lead vox for a pleasing redux of The Four Seasons’ 1975 pop nugget, “Oh What a Night,” on Sharing Your Love. On the slow-jam front, Robinson shines on the tender “Promise Your Love” and the strikingly romantic “You’re My Girl” (another Thornton co-write). While the ballad count was pared down slightly for album number four, This Is Your TIme, the representative tunes are no less affecting. This was to be the group’s final LP with Malavasi at the arranging and conducting helm, and his inspired and heartfelt renderings on the beauteous “Angel” and the alluring “You’ll Never Realize”—coupled with Robinson’s sensitive readings—don’t fail to soothe the soul.

This Is Your Time’s title cut—the album’s only single to enter the R&B top 40—is an ideal merging of the band’s seminal sound with updated synth-funk elements provided by Allen, who by this point had assumed co-production and rhythm arranging duties. Perhaps radio DJ’s weren’t yet ready for a more full-fledged realization of this new edge to the group, as the final single released from the set failed to make the charts altogether. Entitled “Got to Get Up,” the album opener is one of Change’s funkiest entries of all, with Brennan dropping charismatic verses and suave falsetto phrasing over Allen’s snaky bass moves and an ultra-tight drum groove.

The Change brand evolved into marked new dimensions for 1984’s Change of Heart, which would mark one of its biggest (and, in some ways, final) hurrahs. Burgeoning producers Jimmy Jam and Terry Lewis were tasked as the first outside team to craft a Change album, and their efforts paid off artistically and commercially, but for a regrettably short time. Penning half of the album’s entries (with Allen handling the other half), they brought a fresh yet true flavor to the proceedings, instilling the group with full-bodied vocal arrangements and plentiful swaths of keyboards and big drum sounds driving the material.

Change of Heart opens with an impactful slow-jam, “Say You Love Me Again,” sung by Brennan and Cooper with earnest conviction. It’s otherwise, however, a steady and funky stream of uptempo cuts packed with melodic swagger and a serious groove factor. Coming hot on the heels of Jam & Lewis’s success with The S.O.S. Band’s “Just Be Good to Me,” the title cut similarly sprang Change into chart territory they hadn’t frequented for several years. Cooper’s fiery vocal shades ensured that the core of the band wasn’t lost in the considerably redefined sonic parameters, while Allen’s co-production on memorable selections like “It Burns Me Up” and “True Love” stood strong alongside those with the signature J&L touch, such as the dreamy “You Are My Melody” and atmospheric “Warm.”

Less than ideal business circumstances prevented Jam & Lewis from being involved in the follow-up album, Turn on Your Radio. Chief production was credited to Petrus, though Allen played a hard to refute role in the feel and execution of the tracks. While chart activity fell mostly silent for Change at this point in the U.S., a trio of choice tracks from the album became favorites abroad: the cool, mid-paced groover, “Let’s Go Together”; the Allen- and Cooper-co-penned “Oh What a Feeling”; and the understated nugget, “Mutual Attraction.” Cooper’s vocals are assuagingly stylish on all of these cuts, while Brennan turns in equally engaging performances on the energetic title track and aromatic “Examination.”

For undisclosed reasons, a rare Change album which Romani produced in 1990 entitled Change Your Mind (ultimately released over a decade later) is not included in this “complete” box set. However, his most recent reconvening of the outfit, featuring vocalist Tanya Michelle Smith, makes for a nice addition to the collection. Updating the group’s fundamental sound with subtle melodic and rhythmic components which are at once modern and classic, the resulting 2018 album Love 4 Love found a nice balance of appeal to hardcore fans and welcoming to younger listeners with an appreciation for soul authenticity. Whether or not any of its songs will stand the test of time like those of the ‘80s Change remains to be seen. Either way, the affair feels genuine and well-founded.

Everything and More also offers a nice share of bonus mixes of singles from each album, with highlights being Paul Hardcastle’s renderings of “Oh What a Feeling” and “Let’s Go Together”; the UK 12” remix of “Paradise”; and several funky revamps of tracks from Love 4 Love which were previously released only digitally. These additions make for tasty icing on an already richly appetizing musical cake packed with savory melodic morsels and an array of groovy flavors. Undoubtedly, herein is ample reason to celebrate the glow of Change in all its glory. Highly recommended.