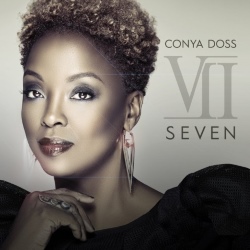 Click on CD cover
to listen or purchase
http://www.amazon.com/Vll-Seven-Conya-Doss/dp/B00WGE9V9O/ref=as_sl_pc_tf_til?tag=soultracks-20&linkCode=w00&linkId=ZIBU6DQY7NSXJSTQ&creativeASIN=B00WGE9V9O

The artistic direction that Conya Doss has taken throughout her career as one of the leading figures in the indie soul movement is guided by her two other major vocations as teacher and mother. If Doss made a conscious decision not to pursue the kind of pop-oriented music, with its frequent diversions into parental warning label territory, her work as an educator in the Cleveland schools and as the parent of a young son likely serve as motivating factors.

Both identities have inspired album titles – 2002’s A Poem About Ms. Doss and 2010’s Blu Transition – and it can be argued that “Beautiful,” a track off VII, her latest album, is inspired by both roles. Doss likely encountered plenty of bullied students dealing with beaten down self-concepts who openly doubted their worth. And a waltz lullaby with profound lyrics such the ones heard in “Beautiful” sounds like something that a caring teacher might tell a student in a moment of crisis: “You’ve been broken and abused/Taken for granted/ Often used/Like a flower in the rain/You’re roots grow deep so you will stand/Words are lethal when they flow/From callous people who don’t know/You feel like you’re invisible/Just hold on and don’t let go”

Tunes such as “Beautiful,” along with duets such as “For Us” (where Doss teams up with Frank McComb) have always been in the Queen of Neo-Soul’s wheelhouse. Doss takes the minimalist approach with the musical arrangement and that provides ample space for both vocalists to showcase their vocal skills on the tune’s solo portions and when they sing in harmony.

However, I’ve always believed that Doss’s work on up-tempo numbers was underappreciated, going back to the tragically slept on “Out Tonight” on her 2008 album Still. Doss brings that same energy to “Gone,” the opening track on VII. The cut fuses the percussive hand claps, cowbells, snare drums and hi-hat cymbals with rock guitars, electric organ flourishes and a funky bass line. It serves as a reminder that Doss came up in the 1990s as a big fan of trip hop music. The track itself sports the narrative of Doss freely giving herself emotionally to the man who has taken her heart.

Doss maintains much of that formula on the next track, “Fragments.” The primary difference – besides a change in theme – is an arrangement that adds even more funk to the tune’s bass line and the shuffle march adopted by the drum track. Meanwhile, the mid-tempo ballad “You Got Me” stands along with “Gone” and the McComb duet as the three strongest tracks on another very strong album.

I keep waiting for the mainstream to discover Doss, and while there are a few tracks on VII that can nourish Urban AC radio, I should probably temper my expectations. The examples of the indie soul artists who get overlooked outnumber the good news stories of performers who break through. However with a seventh strong album to add to her catalog, Conya Doss’s stock will continue to grow -- and indie soul listeners know a good investment when they hear one. Solidly Recommended.