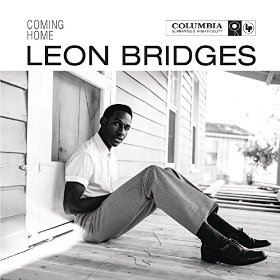 Click on CD cover
to listen or purchase
https://www.amazon.com/Coming-Home-Leon-Bridges/dp/B00VVZUPIU/ref=as_sl_pc_tf_til?tag=soultracks-20&linkCode=w00&linkId=7CR2SPKYZDF3CNKO&creativeASIN=B00VVZUPIU

The wide availability of streaming music services, with Apple Music only the latest entrant to the market, is a double-edged sword for artists.  While it allows new and independent artists to release their music quickly to a worldwide audience without the necessity of a high-powered label, it also pits new artists against the entire history of recorded music.

A listener can easily dial up on her Spotify app the complete catalog of the greatest of the greats, in any genre of music, so a new artist’s music needs to compel the listener on its own merits to stay the course.  And unless the music grabs the listener by the lapels, whispering if not shouting “I’ve got something unique for you, something different, something you need and don’t already have,” the listener is likely simply to fire up Innervisions for the 12,000th time, because Stevie never disappoints.  That problem is multiplied a hundredfold when the new artist sounds like an old artist, but isn’t quite yet up to the old artists, despite every effort by producers to mimic the sound and feel of another time.   And that, unfortunately, is the principal problem with Leon Bridges’ debut album, Coming Home.

I report this with sadness.  Back even before Leon was signed, he released on SoundCloud his track “Coming Home,” which ended up becoming the first single off the album, and it got the music critics, myself included, excited.   I praised the song as “original retro” in a Soul Tracks “First Listen” article and likened the sound to “Sam Cooke dropping in to take over the vocals on Magic Sam’s West Side Soul sessions…..”   I didn’t say that lightly; Leon does have an impressive vocal gift, he does remind one of Sam Cooke, and the production on that particular track does make some effort not to sound entirely encapsulated within a bubble constructed in the years 1955-1965.   And I still recommend that track -- by all means add it to your “old school” playlists.

The rest of the album involves productions that suspend Leon in amber formed in that earlier era.  One song, “Lisa Sawyer,” even calls out the year 1963, and listening to the others is like a game of “spot the original artists.”   Every sound seems lifted, or copied, from someplace else:  the “doo wop, doo wop” sounds of  Aretha’s backing vocalists on “Better Man,”  the distorted electric guitar sounds and effects straight off of a Stones’ record in ’65, the horns and vocal stylings of the great STAX albums, and so on.   The lyrics likewise all hearken back to a much earlier, simpler time, as in Leon’s track “Brown Skin Girl,” where the ladies are “cutie pies” in “polka dots.”  (Even the marketing and visuals for the album portray Leon as appearing to have climbed out of a Sixties time capsule.)   I’m afraid that those of you who have heard Sam Cooke -- and I hope that’s everyone -- would, after the first track, turn to the real thing rather than keep listening.  And you would be justified.

That said, Leon Bridges is a talented singer with a strong sense of melody.  Unencumbered by producers trying to replicate a vintage sound, guided by his own muse, and with attention to varying the tempos (too many songs on this debut are slow),  I’d like to hear where Leon takes things and hope he heads in a different direction -- one worthy of the clear talent that he brings to the table.   Not recommended.