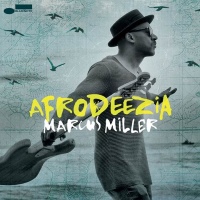 Click on CD cover
to listen or purchase
https://www.amazon.com/Afrodeezia-Marcus-Miller/dp/B00SM3VALA/ref=as_sl_pc_tf_til?tag=soultracks-20&linkCode=w00&linkId=BJ4PG6EW52WARG52&creativeASIN=B00SM3VALA

For more than three decades Marcus Miller has been called upon as one of the most reliable, well-versed musicians and producers. He maintained lengthy relationships with legends Luther Vandross, Miles Davis and David Sanborn that resulted in several Grammy Awards and countless studio sessions.  This is not to discount his work as a band leader, with 22 solo projects since the mid-eighties.   More than just an electric bassist who keeps steady time, Miller takes his rhythmic foundation very seriously in a balancing act of funky overtones, jazz, or whatever the genre may dictate.

Incredibly adept as a multi-faceted instrumentalist who also plays bass clarinet, saxophone and keyboards, Miller was raised in a musical family that included jazz pianist Wynton Kelly and his father, WIlliam Miller, who instilled in Marcus a passion to be the best musician he could be.   Being exposed to a wealth of music since the age of 12 also increased Miller’s burning desire to develop his own unique musical attributes.    These potpourri of sounds are reflected in Miller’s instinctive arranging and producing, making him feel right at home with a variety of styles and projects, ranging from the go-go induced "Da Butt" from Spike Lee's School Daze soundtrack, collaborations with contemporary jazzman David Sanborn and work on Luther’s smooth silky hit parade (“Power of Love,” “Dance with My Father,” etc.).  Miller was also instrumental in the latter portion of Davis’s career, including the critically mixed, heavily synthesizer-friendly fusion jazz fueled Tutu, featuring two tracks that were inspired by South Africa's Archbishop Desmond Tutu (the title track) and Nelson Mandala (“Full Nelson.  Yet Miller’s mission statement goes beyond an in-demand studio player/musician and solo artist out for Grammy glory.

Besides his role as an international ambassador for jazz who has travelled extensively all over the world (check the map under Tour on Miller’s website), Miller is fervently passionate about his African ancestors, whose survival as slaves were driven by the power of music.  More recently, Miller was named the Artist for Peace by UNESCO and a spokesman in the Slave Road Project after visiting the House of Slaves on Goree Island in Senegal.  This powerful visit sprang forth “Goree,” from his last CD, Renaissance,  and is the basis for Miller’s latest work, Afrodeezia.

In honoring Miller’s black African ancestors, Afrodeezia incorporates his own working band and his extended musical family from the Caribbean, South America and West Africa.  Miller’s musical paintings illustrate how several generations of those ancestors have influenced the urban music culture in so many ways.  The first single, “Hylife,” bridges the sweet highlife rhythms of Ghana with funk-spiced-jazz, revolving around sweet breakdowns and solid instrumental adlibs. “I Can’t Breathe” (featuring Chuck D and Mocean Worker) is perhaps a candidate for the next single, anchored by its catchy hand clapping electro rhythms and pulsing marimba, flanked by a ‘rock the microphone’ appearance by Chuck D: “Never a good thing when you are breathing in fear.”    The energetic festivities continue with “Son of Macbeth,” packed with rock riffs and an engaging hook with brass, marimba and electric guitar, and “Water Dancer,” which dabbles in avant-jazz, anchored by aggressive African percussion, marvelously matched by trumpet, saxophone and electric guitar solos.

There are virtually no bumps on Afrodeezia, except perhaps the curious selection of “Papa Was A Rolling Stone,” a performance offers little compared to The Temptations’ definitive psychedelic soul rendition from 1972, other than Miller’s always welcome double bass punch (guitar and clarinet).

Miller’s more profound work on Afrodeezia speaks loudly.  An African choir and Miller on bass clarinet enhance some unusual textures for the almost unplugged “Preacher’s Kid Song (Song for William H),” touched up with gospel and blues overtones.  Though known for his ear-defying bass tapping and popping, Miller’s sensitive bass approach is another of his strongest suits, as demonstrated on the opening of “B’s River,” highlighted by a plucked acoustic bass hook. “We Were There” further spotlights Miller’s bass skill set, switching between bass popping, warm tones and complex layering.  Unfortunately, “Xtraordinary” is fairly ordinary with the patent smooth jazz runs, despite shining moments from the brass section and nice contributions from Miller’s bass, sax, vocals and marimba toward the end.

True to Marcus Miller’s mission statement to honor his African ancestors, Afrodeezia is an enjoyable canvas of his vision that covers folk, gospel, rap, and more, while tying it all together with his insightful brand of jazz.  And if there is a final argument to recommend Afrodeezia it is the undeniable pleasure of hearing a first-rate international musician like Marcus Miller simply doing his thing.    Solidly Recommended.