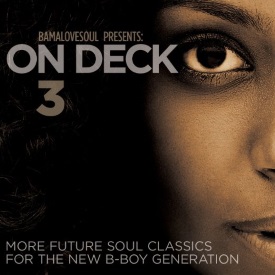 Click on CD cover
to listen or purchase
https://www.amazon.com/Bamalovesoul-Presents-Deck-Various-Artists/dp/B00PTMA810/ref=as_sl_pc_tf_til?tag=soultracks-20&linkCode=w00&linkId=AIV7SDQ6YXHJJMJE&creativeASIN=B00PTMA810

I can’t pinpoint the moment when southern hip-hop became ratchet. Yes, there are plenty of southern based rap acts who make or have made great music but there a plenty of people for whom the face of southern rap is Two Chainz rather than OutKast or Ludacris. Southern based R&B/soul singers don’t have the same kind of image issues. Beyonce’s from Houston, Ledisi is from New Orleans, Anthony Hamilton is from North Carolina and indie soul king Anthony David hails from Georgia.

Countering the prevailing view that all Alabamians or Southerners listen to the same kind of music is what DJ Rahdu had in mind when he started the Website BamaLoveSoul back in 2008. I’ll let you marinate on the silliness of that prevailing view for a while. Can there be people out there who really believe that the millions of Alabama residents have identical musical tastes? There are Southerners who love country music but turn their noses up a Bluegrass just like some fans of R&B don’t listen to the blues.

With his mission to use BamaLoveSoul.com to bring additional exposure to alternative R&B and hip-hop acts, primarily from his state and region, DJ Rahdu is yet another fan of genres rooted in the African-American musical and cultural experience who actively resists the constriction of R&B and hip-hop to songs that manage to receive radio, MTV and major label support.

It won’t take many spins of On Deck 3 to realize that most of these cuts will have a hard time finding a place on most hot R&B and hip-hop stations, or even most UAC stations. The irony is that the cuts on On Deck 3 would have received airplay at a time in the not too distant past. The easy fusion of a lyrical MC such as Sean Haefeli with hard bop jazz on the track “Essential” brings to mind artists such as The Digable Planets or The Native Tongues collective and most notably the late Guru whose Jazzmatazz records still draw a loyal following.

So what changed in the R&B/hip-hop market that has labels and radio ignoring the diversity represented by the range of voices heard on On Deck 3? Well, there are the usual suspects of consolidation by record labels and radio stations and the general risk averseness of radio station managers. The labels, stations and DJs will all point at the consumer and say they are simply giving the people what they want. The success of BamaLoveSoul.com and the output on this compilation stands as a strong argument that a lot of people aren’t being counted. Recommended.