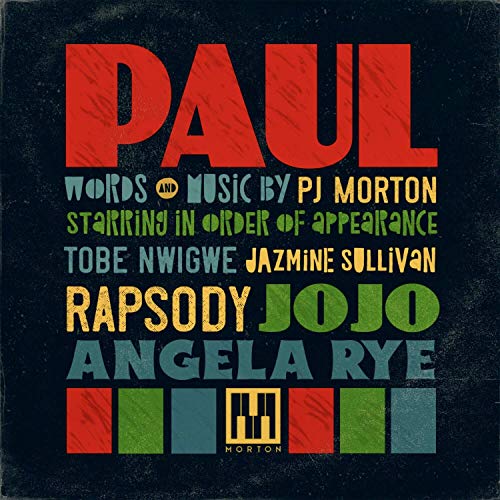 Click on CD cover
to listen or purchase
https://www.amazon.com/PAUL-Pj-Morton/dp/B07TXLF947/ref=as_sl_pc_tf_til?tag=soultracks-20&linkCode=w00&linkId=9bdecdd4dcd8df1a6a1deec0dd30fa15&creativeASIN=B07TXLF947

Paul. The name is soft to the tongue but hits the air with a resonating roundness and weight. It’s a fitting title for the “Son of a Preacher Man,” an album cut from the son of Bishop Paul S. Morton, Sr.’s 2010 Walk Alone, one that prefaces and underlines Paul in its messaging (it would be a welcome song to remix and add to a future deluxe edition of this memorable album). The title reflects a man who has undeniably stepped from out of the giant shadow of a great man whose long legacy in gospel, pastoring, and the hearts and minds of the people of New Orleans are already cemented.

Paul. The name is soft to the tongue but hits the air with a resonating roundness and weight. It’s a fitting title for the “Son of a Preacher Man,” an album cut from the son of Bishop Paul S. Morton, Sr.’s 2010 Walk Alone, one that prefaces and underlines Paul in its messaging (it would be a welcome song to remix and add to a future deluxe edition of this memorable album). The title reflects a man who has undeniably stepped from out of the giant shadow of a great man whose long legacy in gospel, pastoring, and the hearts and minds of the people of New Orleans are already cemented.

The fullness of Paul also bears an adult distinction that the light, fun, and slightly mischievous moniker “PJ” can sonically rob a man who is well-known to be a devoted father, husband, Grammy-winning performer, and now-official bandmember of one of the biggest pop bands in the world, Maroon 5; a man who has achieved greatness and is still climbing. While Morton may forever be PJ for those who love him, in his station in life musically and personally it is clear that he’s in his grown man season of Paul.

With 32-minutes of music that feels like the welcome third movement in a suite of excellence delivered by his last two non-holiday projects, the panoramic Gumbo and the multi-award-winning Gumbo Live!, Paul further cements PJ Morton’s own legacy as one of the most consistent and melodic singer-songwriting producer-artists in music today. Paul and Paul are both unabashedly mature with something consistent to say beyond just partying and relationships, though the latter gets "plenty luv" and I dare you not to want to two-step to the timely political messaging of “Buy Back The Block.”

As with Gumbo, Paul doesn’t eschew Morton’s obvious debts to soul’s old school. Even as the vocal melody hints at trap soul, the opening percussions of “Ready” playing underneath are right out of the mid-80s R&B playbook, the breath before New Jack Swing swallowed the genre whole. He does the same on his cover of The Gap Band’s classic, “Yearning for Your Love.” Morton modernizes the Oklahoma bassline and percussive elements even as he performs the melody more or less straight, occasionally coating it with vocoder to make the canon jam feel new. Both are a tightrope dance to the two audiences the 38-year-old has carefully cultivated: a younger crew who came to know his name through his world-famous band, and a more mature indie-soul segment that has rocked with Morton since his classic Emotions debut in 2005. It was then that Morton demonstrated that the most important element necessary to achieve musical longevity was deference to melody and homage to the clean, simple yet meaningful lyric. With only the occasional EP misstep, right from the start, Morton’s albums have been prodigiously chockful of songs that are hummable, infectious, memorable, family-friendly, and readymade for the whole car to sing along.

Accordingly, Paul continues to make early fans warm and fuzzy with duets with Jazmine Sullivan and JoJo, both singer’s singers who can outrun the sky with well-timed and perfectly pitched melisma. Both the declarative “Built for Love,” previously released as a frequently licensed single, and the demanding “Say So,” Paul’s lead single, is performed over the romantic sways of seductively lazy soul swings that welcome hip-to-hip motions. On “Built for Love,” accenting horns peek in and out around the plain-spoken feelings of a couple who have endured throughout the years and aren’t going anywhere.

The ways Morton constructs the space for him and JoJo to play have nods to the synthy B-side ballads of Wonder’s In Square Circle and D’Angelo and Lauryn’s “Nothing Even Matters.” Unlike that neo-soul cut's minimalism, Morton continues to fill that openness with new instrumentations every few bars to match the fuller and more impassioned feelings expressed by his and the lady’s gospel drenched vocals. It’s a musician’s trick that goes unnoticed by those only paying attention to the vocal performance and don’t understand why by the end of the cut, they’re as breathless as a runner after a race. Just take a moment, eyes closed, and listen to Morton’s subtle skills as an arranger and producer by focusing on the instrumentation for both smooth soul exercises to hear what 10,000-plus hours of playing and being a clear fan of the R&B greats has honed.

The genius-through-practice has almost no albums that do not also take the time to examine the feelings of everyday people, those little spoken upon in a world bedazzled by nihilistic tales. Paul is no different. Taking on the longing for the wide-eyed wonder and innocent faith of childhood that nostalgically tugs on many a grown and coarser heart on “Kid Again,” Morton hints at both the promise of early ragtime in music and Wonder’s “I Wish” from Songs in the Key of Life in theme. “Buy Back the Block” honors the recently fallen rapper and entrepreneur Nipsey Hussle in a rousing anti-gentrification call for the black community to extend Hussle’s legacy by engaging in more cooperative economics as a warrior tool against displacement.

In more wistful tones, Morton laments our distressing current political moment in MAGA? featuring an unapologetic historical critique of the nation by an always on-time Angela Rye. “Practicing (feat. Tobe Nwigwe)” is an ode to rebel dreamers, a recognition of their misunderstood struggle, and an acknowledgement of the randomness of achievement in a context designed to ensure more failure than success. A secular companion to Morton’s smash gospel hit for Dwayne Woods, “Let Go (Let God),” “Don’t Let Go” supports those at the end of their rope, offering a supportive hand and a healing hope.

In each, Morton is our big brother, soother, and quietly righteous messenger in ways understated rather than showy, stealthily delivering messages of resistance, encouragement, and empowerment to his people. And, in the doing, he is the tall and mighty Paul his father raised him to be. Highly Recommended.