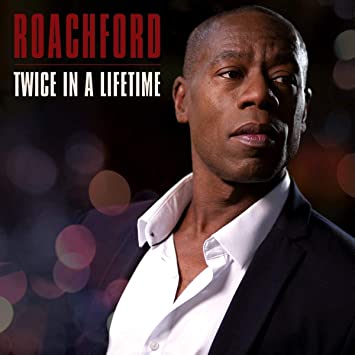 British tunesmith and musician Andrew Roachford has built up a strong catalog over the past three decades. The singer’s flair for soulful tunes with rock underpinnings has resulted in albums that stand the test of time well beyond commercial shelf life. Many American listeners are primarily familiar with his 1989 breakthrough hit, “Cuddly Toy.” His consistent output up until the 2010’s, however, consists of dozens of well-conceived singles embodying his depth and diversity as a vocalist and songwriter. “Only to Be with You,” “The Way I Feel,” “From Now On,” “River of Love,” and “Get Ready!” are a few tunes which have found him faithful audiences around the globe.

Twice in a Lifetime, Roachford’s sixth solo album (and eleventh overall, counting those he made as leader of his eponymous band), finds the artist settling into a comfortable groove of traditional soul mixed with a few healthy doses of modern embellishments. Following an operation to remove lesions from his vocal cords in 2018, he hasn’t lost any of the resonance which has distinguished so much of his work. Now, though, he has an added grit that serves to strengthen his delivery of tales of heartbreak, longing, and redemption.

A case in point is the inherent knowing and candor when he opens “Won’t Think Twice” confessing, “I got pretty good, I’m pretty good at building these walls/And I would run away, run away/I was too scared to fall/In my head, I thought I had at all figured it out/But I had never known someone like you.” The piano and guitar parts that come in as he celebrates, “Don’t know a reason, ‘cause you made up my mind/Ain’t gonna worry ‘bout what’s wrong or what’s right,” enhance his reflective tone as he crescendos to a gutsy reverence.

The driving “Are You Satisfied?” juxtaposes a tongue-in-cheek lyric with a riveting drum groove, brass-infused chorus, and coolly hovering background vox complementing Roachford’s to-the-point phrasing. It’s an energizing number that would make for an ideal opener when he embarks on his 2021 UK tour. In contrast, the melancholy “Written in My Heart” is at once an admission of reality and a quest for finding hope in the hard truth. The chords are sullen, but played with a certain vibrance that shines a light on his cautiously passionate performance.

Roachford’s distinctive unification of vocal subtlety and power is profoundly present in the moving “You’re the One,” which begins within a simple acoustic setting and gradually builds to a more full-fledged arrangement. Meanwhile, “High on Love,” one of the first two singles pulled from Twice in a Lifetime, showcases his confident poise in a musical context that feels especially current. Likewise, the feel-good groover “Love Remedy,” first debuted last year, confirms his standing as a purveyor of quality soul with his ear still in tune with the pulse of today. Recommended.