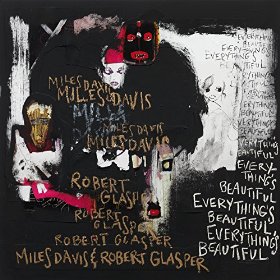 Click on CD cover
to listen or purchase
http://www.amazon.com/gp/product/B0189YP1F2/ref=as_li_qf_sp_asin_il_tl?ie=UTF8&camp=1789&creative=9325&creativeASIN=B0189YP1F2&linkCode=as2&tag=soultracks-20&linkId=VIOXXKS4QUZYI5WS

A whole album sampling Miles Davis should be a blasphemous act, but in the assured hands of jazz darling du jour, Robert Glasper, the merger of Davis’s classic performances with today’s nu-classic voices is both an act of reverence and forward momentum. Glasper is one of the few contemporary jazz musicians who can make what far too many consider an increasingly elitist art form accessible to the streets without having to delve into the bastardization of smooth jazz.

A whole album sampling Miles Davis should be a blasphemous act, but in the assured hands of jazz darling du jour, Robert Glasper, the merger of Davis’s classic performances with today’s nu-classic voices is both an act of reverence and forward momentum. Glasper is one of the few contemporary jazz musicians who can make what far too many consider an increasingly elitist art form accessible to the streets without having to delve into the bastardization of smooth jazz.

Reminiscent of the Guru’s Jazzmatazz and Hidden Beach Unwrapped series, but more cerebral and envelope pushing than either, Glasper’s Everything’s Beautiful offers a series of modern-day vignettes that interpolate some of Davis’s most memorable compositions with artists like KING, Bilal, Illa J, Ledisi, Phonte, Erykah Badu, Laura Mvula, and the indomitable Stevie Wonder. Others are tribute covers to Davis’s different eras, like Hiatus Kaiyote’s “Little Church” and Georgia Ann Muldrow’s “Milestones.” Some are slivers ending just as you’re settling into their ermine embrace and others linger for a while and lets you sink your toes into warm pools of simple elegance. Refreshingly different from even the more staid Black Radio volumes that cemented Glasper’s name in the minds of every day music fans, Everything’s Beautiful befits its name.

Badu’s bossa take on Miles Davis’s “Maiysha” with Braylon Lacy on bass and Glasper on keys and percussion (the latter with Rashad Smith and Badu) is one of the project’s longer electrosoul body hugs. Glasper and his collaborators manage to make it feel like both Badu and Davis at once and in the process create a unique atmosphere. Through the use of their now familiar thin drum production and layered, feathery vocals, producer Paris Strother does the same for KING on a sliver of a song called “Song for Selim,” which includes a sample of “Selim” written and performed by Davis to sublime ends. Ledisi and Phonte bring some needed edge to their respective turns on “Violet” (featuring Davis’s “Blue in Green”) and “I’m Leaving You” (featuring Davis from the Jack Johnson sessions), with a delightful Phonte infusing some streetwise introspective levity on his track (with Bianca Rodriguez echoing Badu on sultry backgrounds), while Ledisi scores with girl group harmonic realness on her ‘70s hit-the-door funk declaration. Brilliant bassist and frequent collaborator, Derrick Hodge, shows off on three of the strutting, albeit brief tracks, including Bilal’s urbane “Ghetto Walkin’” -- darker songs in conversation with one another and tied as much through Hodge and Glasper’s instrumental musculature as they are by the choice Davis samples.

Not everything is produced or performed by Glasper, such as the DJ Spinna produced epic “Right On Brotha,” which includes Miles Davis playing Wayne Shorter’s “Nefertiti.” Stevie Wonder doesn’t sing on the track, but his harmonica does, gloriously so, as do Lakecia Benjamin’s alto and tenor saxophones and special ingredient Chris Rob on various keys and synths. The all-instrumental, perfectly mixed composition also features a rare harp by Brandee Younger and is easily a standout on the project. The lushly cinematic aural orgasm that is Hiatus Kaiyote’s take on Davis’s “Little Church” is another almost otherworldly showstopper absent the Glasper trademark, his curation aside.

Those who have been missing Laura Mvula will not be disappointed in the elegiac “Silence Is the Way,” which features an almost ubiquitous Josef Zawinul’s “In A Silent Way” performed by Davis. The surprising bassline spruces up the melancholic proceedings and adds a bit of avant-garde drama, as does Glasper’s experimentation on keys. Delivering everything but silence, Mvula and Glasper make some wonderful left-of-center music together and inspire speculation about what fruits a fuller, longer collaboration between them might bear.

The closest to a straight-ahead take on Davis is Georgia Ann Muldrow’s highly percussive rendition of Davis’s “Milestones,” featuring a jaw-dropping piano solo by Glasper, reminding us why he’s the man of the moment. Even with it coming the closest to Davis’s spirit and sound, this “Milestones” still manages to be its own progressive thing for contemporary ears. Indeed throughout Everything’s Beautiful, what is perhaps most compelling about this love letter is that the project is still undeniably jazz, still not dumbed down to make it palatable to simple tongues, but also still leaves multiple doors open for anyone with an open ear to hear to do so. This ability to be smart, yet welcoming to the every man, is perhaps Glasper’s greatest gift, much like his project’s inspiration. Highly Recommended.