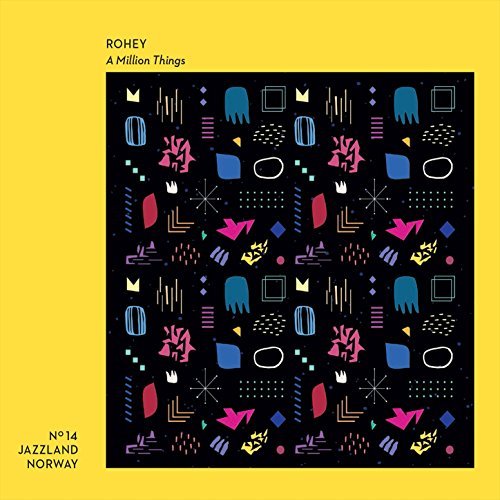 The debut album by this three-year-old band, Rohey, is what you’d expect from Jill Scott or Adele if either said screw the charts and got with one of Oslo’s famed hard bop or jazz fusion bands for some experimental fun. Scandinavia has been quietly killing the jazz and soul game for years with artists like Tuomo, Kinny, Quadron, Bernhoft, Timo Lassy, Beady Belle, Stephen Simmonds, Marie Dahlstrøm, and Samson for President, to name but a few. This bright Norwegian band proudly keeps that Northern torch alive by following the blueprint of some of the best of those artists by creating a project firmly rooted in the atmospheric traditions of neo-soul, while also leaning fully forward with futuristic jazz and funk. The project is familiar in its cool lounge allusions, but also unexpected in its multiple improvisational twists and turns by an imaginative band of exemplary musicians with a collectively brave heart. Rohey’s A Million Things is just left-of-center enough to be considered daring in today’s cookie cutter musical landscape, but accessible to every person who swears they hate jazz but loves “edgy” artist-artist’s like Laura Mvula or Björk.

Versatile, powerhouse alto, Rohey Taalah, is backed by a jazz-funk trio that feels like a synthy, big band orchestra in the way they fill every crevice with sound, thanks to the outsized gifts of Ivan Blomqvist on keyboards, Kristian B. Jacobsen on bass, and Henrik Lødøen on drums. Rohey’s musicians are every bit as important as their namesake frontwoman, with both musicians and singer given equal musical weight throughout the project in ways reminiscent of recent jazz hybrid projects by The Baylor Project and Ronald Bruner, Jr., where the singer is handled as a respected, but not privileged, instrument in the tapestry’s mammoth whole. As with those artists, the overall sound here is sophisticated and coolly classy even as the vanguard youngsters here try to push the envelope—and the listener’s ear—with songs as bold as their urgent messages about the environment, climate change, and various social ills on rebuking cuts like “Responsibilities,” “My Recipe,” and “Cellphones and Pavements.” Taalah’s righteous, advocating voice is big and brassy enough to match the mammoth walls of sound the band erects as shimmering, sometimes spiky backdrops as brash and audacious as they are nearly always beautiful.

Not everything is colossal and ever evolving in kaleidoscopic ways on A Million Things. In it’s bittersweet lyric and restrained vocal, the twinkling hush of a lullaby, “Now That You Are Free” is just as emotionally impactful a locket portrait as the adventurous floor to ceiling canvasses occupying the album’s art space. The spare drums and keys of “Tell Me” keep it simple with a “less is more approach” on a questioning song that feels like a prayer to the Gods or perhaps the universal human family. The opening number, “I Found Me,” is also less overtly intricate, if only by comparison to the major tracks, and may be the closest the project can proclaim as a commercial soul single. And, really that’s only because of the cut’s traditional Fender Rhodes and drum and bass composition hewn more closely to the early paths of artists like D’Angelo and Erykah Badu, artists who made jazzy soul sophistication popular for mainstream audiences again, not because it’s any less musical than anything else making A Million Things one of the finest releases of 2017.

There is little fat on an album touting A Million Things and can sometimes feel like a million musical things happening in a cut. Like several previously mentioned jams, the syncopated vocals of the title track and punchy Afrobeat of “Can’t Get This” are showstoppers, as is the metaphoric “Is This All There Is?” in their demanding arrangements that can’t help but showoff the dexterity and talent of everyone involved at every level, from songwriting to musicianship. Nothing here is done half-hearted or feels less than sincere. Only the somewhat redundant lullaby of “My Dear” and the forced aggressiveness of the blessedly brief “I Wonder” feel like false notes, but on an album peopled by mini-maestro masterpieces we can take a superfluous cut or two just to remind us that this toddler act with the genius debut is still stunningly mortal after all. Highly Recommended.