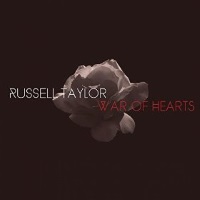 Click on CD cover
to listen or purchase
https://www.amazon.com/War-Hearts-Russell-Taylor/dp/B00SAUNQTE/ref=as_sl_pc_tf_til?tag=soultracks-20&linkCode=w00&linkId=S27ZUUXABJ5GRT3Y&creativeASIN=B00SAUNQTE

One of the interesting things about reviewing multiple albums by a particular artist is that the reviewer has a chance to see how that artist evolves over time. A reviewer can hear how the artist incorporates new ideas into his or her work. Of course, there’s nothing stopping any reviewer from going back and playing material from previous records regardless of whether you wrote about a certain artist previously. However, as a reviewer you listen to the projects differently – more intently perhaps - but definitely more frequently over a relatively short period of time.

The evolution made by Russell Taylor between his second album, Confessional, and the recently released War of Hearts is manifested both through some of the topics that he chooses to address as well as the way that the latter project is arranged. War of Hearts sees Taylor expanding the range of topics that he addresses to include coping with the death of a loved one on “Carry You,” and the struggles of trying to navigate the perilous landscape of urban America in “Ghetto Street USA,” the best song on War of Hearts.

Taylor hinted at an affinity for electronic music throughout Confessional, and he moves more assertively in that direction on War of Hearts, while also managing to remain rooted in funk. “Foolish Heart” borrows 80s synth and programmed hand claps and merges them with a hip-hop percussive bass and his raspy yet rangy voice to tell a story of two lovers who continually act on an attraction that is both mutual and dysfunctional.

War of Hearts includes two remakes of tunes from Confessional, although the transformation of “Blueprint” from the sparse acoustic guitar and voice arrangement featured on the 2010 project to a fuller R&B ballad that includes more prominent backing vocals stands as a much stronger remake than his overly programmed cover of the excellent rock/funk power ballad “Let Me Love U.” Those looking to hear Taylor returns to those rock influences might opt for the power pop cut, “What She Wants,” with its nursery rhyme piano line serving as the foundation for the rock guitar riffs, booming percussion and Taylor’s narrative about a woman whose spirit refuses to be contained.

Taylor’s growth is evident in the lyrical content that holds up throughout the album. Take the percussive and mournful “Carry You,” a song that deals the struggle of a person trying to keep alive the memory of someone who recently passed away. Those lyrics make palpable the sense of loss that one experiences in those first weeks and months after someone dies: “Though you were afraid to leave/there was peace in your eyes/Death can be so final, but the spirit never dies.”

Taylor keeps the pulse of the drum going while stepping up the tempo and the tension on the politically charged “Ghetto Street USA.” The track sports a funk-infused bass line that serves as the foundation for a percussive shuffle-march rhythm in a tune that describes the daily struggle to find meaning and humanity in a world that often bent on denying both: “City lights, city nights/See how they run/Off to work/Home again, it starts when they’re young/Raised  up by mothers to struggle their best/Leave it to Jesus/Let him do the rest.”

Expressing musical growth is both easy and hard for artists such as Russell Taylor. Easy because Taylor probably doesn’t face a lot of external pressure to refrain from deviating away from a formula that previously resulted in success. Hard because a metric such as continued critical success won’t mean much to labels or radio if the ultimate metric – sales and YouTube views – plateau or even fall. Only time will tell if Taylor can grow his fan base; however, Taylor’s growth as an artist on War of Hearts should please both critics and fans who have followed him over his still-developing career. Recommended.