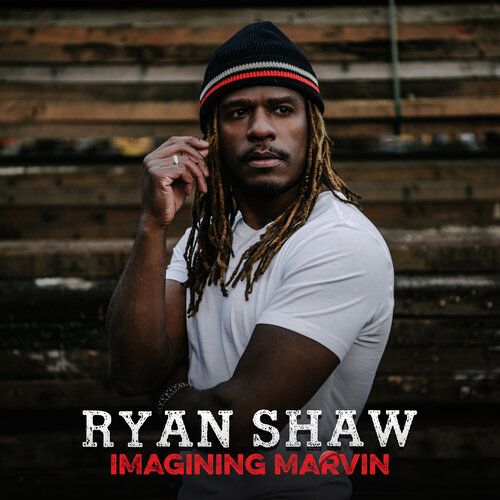 Click on CD cover
to listen or purchase
https://www.broadwayrecords.com/pop-rock/ryan-shaw-imagining-marvin

I know why an artist would be enticed by the prospect of diving into the Marvin Gaye catalog. So much good music. I also know why an artist would choose to remain socially distant from the Prince of Motown’s music. So much good music, so it’s been done to death. What can any artist do with a song like, say, “I Want You,” that has not already been done. Then, I heard the version of the tune included on Ryan Shaw’s Imagining Marvin project and I thought, “well, an artist can do this.” He can give the tune an arrangement that alternates between a piano jazz number and a pulsating, bumping funk number. He can do that because he has the vocal chops to bring a level of theater and church and sensuality to the number that Marvin gave it back in the day. In short, Shaw found that sweet spot between reinterpreting the song and keeping the elements that made the “I Want You” quintessentially Marvin – that soulful and seductive vocal.

And Shaw manages to do this on all of the Gaye covers found on Imagining Marvin, an album that includes both imaginative Marvin Gaye remakes and Shaw originals. In addition to “I Want You,” Shaw covers “Mercy, Mercy Me,” “Save the Children,” and “Sexual Healing” and does an excellent rendition of the Ashford and Simpson penned “Good Lovin’ Ain’t Easy” in a duet with Shoshana Bean. That track is the most straight forward of the covers. The album features Shaw’s cover of Gaye’s two songs that were remakes when Gaye covered them. “I Heard it Through the Grapevine” is a song that Gaye’s label mates Gladys Knight and the Pips scored with before Gaye had a hit with it in 1968. Shaw also covers the Johnny Mandel, Paul Francis Webster Oscar winning song “The Shadow of Your Smile,” a tune that Gaye remade and was released after his passing.

“The Shadow of Your Smile” has been covered by everyone from Wes Montgomery to Tony Bennett to D-Train. Gaye’s versions came in a couple of albums of Great American Songbook songs released after he died. Gaye’s stunning vocals transformed pop tune into a soul song while being backed by a full orchestra. Shaw’s equally stunning vocal and organ baptize the song. It becomes almost a gospel number as Shaw and his organist take us to church (the organ solo set in the middle of Shaw’s vocals is sanctified).

Shaw’s originals are excellent as well. Legendary guitarist Derek Trucks adds an element of blues/rock to “Love and Pain,” a track Shaw co-wrote with Derek Fuhrmann and Round Hill label mate Rob Thomas. Shaw again brings in that element of church, both through his rangy vocals and through the call and response of backing vocalists. Shaw calls Gaye one of his musical idols, and he channels Marvin’s powerful sensuality on the original number “Sin.” This is a simmering bedroom ballad, a true example of using lyrics and voice to tell what you don’t show. Shaw has stage experience  from performing in Tyler Perry plays and in playing Stevie Wonder in “Motown: The Musical,” and theatrical chops aid him greatly on the anthem “Choosin’,” a power packed track that fuses rock and pop and affirms the importance of living for yourself and not being shackled to other people’s expectations or drama.

Ryan Shaw didn’t shy away Gaye’s music because he’s been singing it for much of his life and because parts his early years mirror Gaye’s own. Shaw, like his idol, grew up in a strict religious home where he only sang church music. He’s spent a career showing that he is someone uniquely skilled to sing classic soul and that also comes through on Imagining Marvin. And his original work proves that Shaw spent also spent a lot of time studying the work of songwriters like Nick Ashford and Valerie Simpson. This album is a triumph from an artist from whom we seem to never hear enough. Highly Recommended.