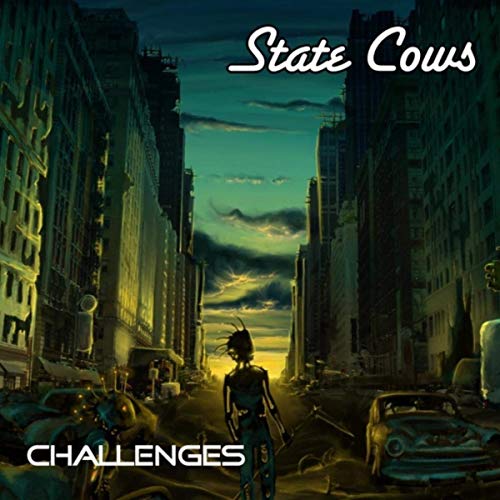 Any group that can kick out a gumbo of yacht rock and Steely Dan mid-career brilliance deserves our attention. And from day one the Swedish band State Cows has serenaded our ears with this caliber of music, the kind that introduces hearty jazz-rock fusion to palettes of soulful ‘80s pop.

Any group that can kick out a gumbo of yacht rock and Steely Dan mid-career brilliance deserves our attention. And from day one the Swedish band State Cows has serenaded our ears with this caliber of music, the kind that introduces hearty jazz-rock fusion to palettes of soulful ‘80s pop.

And like Becker & Fagen, State Cows, in this new phase of recording music, operates as a two-man band, summoning versatile musicians to the studio at their beckoning call. Lead vocalist Daniel Andersson and keyboardist Stefan Olofsson carry the heavy load of composing and producing their own music. On past albums, they’ve called on incredible session musicians like Jason Scheff, Bill Champlin, Jimmy Haslip and Jay Graydon to help spice up their affairs. With Challenges, State Cows’ latest album, they continue that trend while also asserting heavier lyricism and some craftier chord structures and ambitious arrangements, most of which soar a tad bit higher than their usual Toto-meets-Steely Dan tradition. Before jumping into the music, you really encounter the shift at first glance of the album cover. Its dystopian forecast, designed by Polish artist Sadir89, projects a lonely deserted traveler walking into a lonely dark and neglected metropolis, yet the hues of the forthcoming sunrise present the possibilities of a better life ahead.

Luckily, the “challenges” inside aren’t perplexing to the ear. Echoes of West Coast AOR and sunny Steely Dan exude from much of the set. “Borrowed Time” kicks off the affair with whirly synths and a sweet melodic chorus echoing the ooze of glorified yacht rock. By the time it kicks into a sweet key change towards the end and its fiery display of rock guitar from ‘80s session king Michael Landau, you’re sailing faster than a Christopher Cross cruise ship.

Deeper into the disc, their affinity for Steely Dan hits a crescendo. “Darwin Awards” is the biggest they’ve ever cranked out yet. The jazzy chords, embellishing vibes and sneaky riffs are all there, and the arrangements are the most complex they’ve ever issued. It’s oozes with the stuff of Royal Scam. And with “Deportee,” they’ve harnessed a slinky groove that’s highly reminiscent of “Hey Nineteen” and “Time Out of Mind.” By the time Göran Turborn cranks out an ambitious lead guitar solo midway into the gem almost reaching the gravitas of Jay Grayson’s work on “Peg,” you’re forced to do a double take to see if this isn’t a Gaucho leftover.

Even with Steely Dan riffs and ‘80’s synths all in place, they’ve made inroads to grooves that delight with scrumptious R&B. “Waiting for Love,” the only track they didn’t compose, is the brightest of the bunch, coming across as breezy R&B done by the tranquil beach side. Its final minute, a sweet instrumental jam session powered by hearty clap track percussion and a contemporary jazzy guitar solo by Turborn, pretty much deserves its own reprise. And there’s “Human Ladders,” a blessedly funky track that takes the musical paranoia of “The Royal Scam” and drops it into a vat of top-tier Average White Band.

But it’s apparent that their ties to Steely Dan formulas are an impossible thread to break. One may point to “I Got the Message,” where their acknowledgement of the zany anti-rock band gets bold marquee action: “Used to be an average Joe, playing tapes with Steely Dan, one morning I arose to find that everything was over,” Andersson serenades. The rest of the track speaks of a detailed wasteland they discover in a post-apocalyptic time and getting the message “much too late.” For our ears, the “message” is loud and clear. These gents, already three albums into their career, have singlehandedly spared the defense for modern-day yacht rock. With ample examples of the genre’s progression, no longer is it just a sideshow novelty or a retro bar crawl gimmick sprinkled with tribute bands. It’s not just a playlist of vintage blue-eyed soul blaring from a ‘Now That’s What I Call...’ compilation that hums to the satisfaction of baby boomers and Gen X trapped in an adult contemporary castle. It’s an actual fluid, a sweet vibe that’s saturated in the oils of soul, funk and jazzy pop-rock. And State Cows, despite not being an American band, is leading the charge.

Unfortunately, it’s only nine tracks long and only clocking at 35 minutes. If this had been released in the glowing LP era it would’ve been fine. While the shortness of the album’s clocking time feels like a modest letdown, giving off EP vibes, there’s still enough mesmeric grooves and excellent showmanship here to keep ears happy...until the next challenge. Highly Recommended.