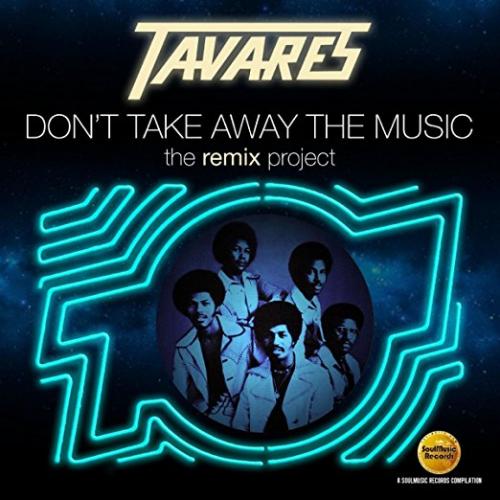 The singing siblings who comprise the group Tavares are often lumped into category of being a “disco act.” Such a categorization shows that plenty of fans have an incomplete recollection of Tavares, a group that released some of the 70s best soul music ballads.

The singing siblings who comprise the group Tavares are often lumped into category of being a “disco act.” Such a categorization shows that plenty of fans have an incomplete recollection of Tavares, a group that released some of the 70s best soul music ballads.

There are good reasons why Tavares’ best recalled hits are the ones found on Don't Take Away The Music: The Remix Project, a record featuring remixes of seven of the group’s biggest songs. Five of Tavares’ seven singles that became Top 40 hits on the pop charts dropped between 1975 – when Tavares released “It Only Takes a Minute” – and 1977 with “More Than a Woman.” I would argue that “It Only Takes a Minute” is more Philly Soul than disco, but the cut was a departure from the sound that brought the group its initial success on soul radio and the tune became the group’s first step into more overtly disco fare such as “Heaven Must Be Missing an Angel,” “Whodunit” and the aforementioned “More Than a Woman – all of which are included on The Remix Project.

Tavares’ version of “Woman” was included on the Saturday Night Fever movie soundtrack along with the Bee Gees’ version, and helped to make that album the biggest selling movie soundtrack until Whitney Houston’s Bodyguard soundtrack. Tavares’ association with the “SNF” soundtrack and movie stands as the major reason many view them as a disco group. Their next album, 1978’s Future Bound, which includes “More Than a Woman,” was perhaps their most assertively disco album.

The one thing that comes across when reviewing the Tavares songbook is that the group moved between genres and styles with ease. They sang soul ballads, doo wop oldies, funk, mid-tempo R&B and, of course, disco. Maybe they had an understanding of how quickly trends shifted, or maybe they had multiple musical interests. Not surprisingly, their 1979 album, Madame Butterfly, was a 180 degree turn – which was a good thing because music tastes (and racial politics) shifted hard in that same year.

Pretty soon, it became a mark of shame to be associated with disco. Multiple explanations exist for this backlash, but many people believe this NPR story is an accurate oral history. Those of us who are fans of disco know that disco never went away, rather it was renamed as House, Dance, EDM. Besides, as The Remix Project shows, a group such as Tavares that created crucial cuts in that genre have nothing to be ashamed about.

The disco songs included on The Remix Project soar for the same reason that Tavares cuts such as “Never Had a Love Like This” and “Remember What I Told You to Forget” soared. Distinct and nearly angelic lead vocals by whichever brother sang, airtight harmonies, and strong lyrical content that comes through loud and clear on cuts such as “Don’t Take Away the Music,” defying the prevailing perception that words were superfluous in disco.

The Remix Project provides multiple versions on several tracks - some of which do not deviate much from the original – while others, such as the slowed down remix of “Whodunit,” give the track an entirely new spin. This version will let listeners focus even more on the lyrics and the story of a man looking to hire fictional detectives to crack the case of who took his woman.

The Remix Project adds EDM staples such as loops, mixes and synth work that might be distracting on other songs, but work well here because Tavares provide the DJs with such a solid foundation. It’s a nice, somewhat altered look back at this talented group’s enviable catalog. Recommended.