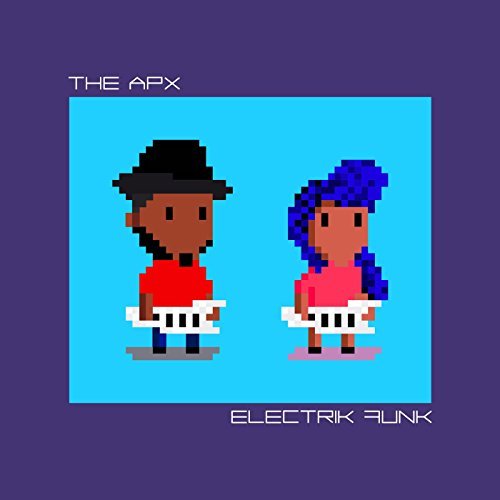 Click on CD cover
to listen or purchase
http://smarturl.it/ElectrikFunkDeluxeDG

After a fairly dismal month of uninspiring new releases, the Atlanta-based husband and wife duo, The APX, rescues us all from the druthers with a late entry deluxe edition of their summer release, Electrik Funk. While the seemingly unending revival of ‘80s synthesizer funk has been a bit long in the tooth, perhaps commercially peaking with the release of Bruno Mars Grammy-nominated 24K Magic, The APX reminds us when a throwback sound is done right, listeners can always make room for another helping of something good. Making no bones about where their sound derives, the duo competently covering Evelyn Champagne King’s 1981 smash “I’m In Love” and doing their own subtle nod to Eddie Henderson’s 1977 jazz-funk “Say You Will” with a wholly original disco-infused, synthwave extravaganza of the same name. The twelve-track debut LP is one long party that’s sure to please classic music heads and youngsters alike.

Hailing from Detroit and New York respectively, Erika and Dee bring their respective cities’ soulful sound to the party funk of the After Party Experience or The APX. There’s plenty of live, organic musicianship intermingled with the galactic synthesizer elements on cuts like “Right on Time” which marries guitar and sax with keytar (shoulder synthesizer) and new wave accents. Their years as a retro cover band has fine-tuned their electrofunk approach to song, one that is often nearly indistinguishable from the classic bands of old like Klymaxx, Starpoint, and the SOS Band. Even a sexy jam like “Spontaneous” has shades of such girl groups as Vanity 6 and the Mary Jane Girls. There’s also just enough disco and groove-based influences to keep the body moving on such jams as “Lose Yourself to the Groove” and the futuristic nearly all instrumental “Electrik Funk Deluxe.” The infectiously percussive “Good Life” breaks the mold with a rhythmic beat and melody line that feels more now than retro and illustrates more of the band’s range as it incorporates everything from old school rap to vocoder to jazz funk in its 3:46 of soulful bliss.

Vocally the songs work best when Erika takes the lead as a soloist (crushing Evelyn Champagne King is no small feat), but Dee demonstrates he can hold his own well enough on the junkyard meets astral funk of “Crushing on You.” Erika’s playful and lilting upper register is on full display on the flirty “Sugar Honey Iced Tea” and on the undeniable hooks of the lush “Truth or Dare,” two of the project’s many standout cuts. The Pittsburgh-based DJ/Producer/Musician Buscrates, the project’s sole guest, blends seamlessly into The APX sound, adding just a touch more sheen and bump to “Digital Lover.”

The band’s latest single, “Right on Time,” is a strong offering thanks to Erika’s sublime alto in the pocket of a mid-tempo groove that couldn’t get more perfect as a radio jam if radio was still interested in anything from the underground. Without the heavy auto-tune overwhelming the lead vocals of most retro funk and new wave music these days and with songs melodic and catchy enough to keep listeners attention for all 12 tracks, the project further distinguishes itself as something fresh and needed in the marketplace even as it heavily borrows its inspiration from a time when such markers were not exceptional was once the standard for the genre. Whether The APX is just a one-trick pony of retro goodness beyond this stunning debut remains to be seen, but for now they’re among the best of the retro funk acts operating in this space today. And, after such a dry musical December of much of the same, we’re just grateful to be invited to the party. Highly recommended.