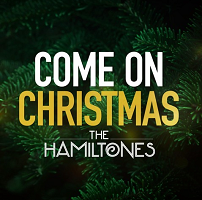 Click on CD cover
to listen or purchase
https://soundcloud.com/thehamiltonesnc/sets/the-hamiltones-12-13-2016

The Hamiltones – Come On Christmas

The Hamiltones – Come On Christmas

The three men who comprise soul star Anthony Hamilton’s background singers, The Hamiltones, have through an infectious series of viral video performances become known entities in their own right. Not since Perri have background soul singers become as instantly recognizable to the general public as these three exceptionally talented young men from Charlotte, North Carolina (whose members are 2E, J. Vito, and Tony Lelo). With such comical, but flawlessly performed ditties as “P.O.P.,” “Hold It Down,” “Momma, I Love Ya,” “Put Some Respeck On It,” “Somebody Roll The Weed,” “Hotline Bling,” and most famously “Grab You By The Pu**y,” these darlings of late night TV and the Internet have proven that while they don’t take themselves too seriously, their talent is certainly something to be take as serious as a heart attack. So, it was only a matter of time that they finally delivered us some of the serious soul sounds we’ve all been waiting for.

Don’t let the title fool you. This free EP only has one bonafide Xmas song. The rest of the downloadable songs the Hamiltones have delivered courtesy of Soundcloud are traditional Southern Soul romances. Each song has a timeless quality even as their origins are strongly rooted in the ‘70s soul and church quartet traditions. Imagine if the Mighty Clouds of Joy made a secular album at their height and you have a fairly good idea of what Come On Christmas sounds like. In truth, the four/four title track may be the oldest in feel of the five songs that each make ample use of the trio’s dynamic harmonies and gospel flavored howls and riffs. There’s a bit of the Staple Singers meets Donny Hathaway in this earthy, visually downhome Xmas song.

The most exciting aspect of this all-too-brief collection is that they are all original compositions, each highly melodic, rhythmically interesting, and vocally powerful. Quality songwriting being what it is of late in pop music, it’s thrilling to hear well-crafted compositions that are as much a songwriting showcase as they are vocal showcases.

The bluesy “Best Friend” and “I See You” are the slow drag standouts here with an approach that owes a nod to such veterans as the O’Jays and successors like Dru Hill. Robust masculine baritones and tenors harmonically bearing their soul to their beloved without pretense or veneers is a lost art reclaimed by these three with cuts like “Best Friend,” “I See You,” and “Never Gonna Let You Go.” With head-bobbing basslines complementing their compliments to their ladies in the most silver of tongues on “You Got That Fire” and “Never Gone Let You Go,” these men consistently honor their relationships and the women who light up their lives…or those that could if just given the chance. These countrified soul songs are all about love, devotion, and intimacy—the good stuff without any of the cynicism and anger that seems to have become part and parcel of today’s urban music.

These unselfconscious men with a delicious sense of humor are men that love women and are unashamed to show it. More of this please. Highly Recommended.