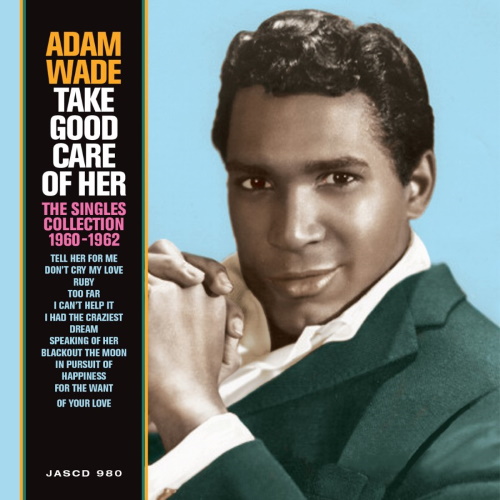 (July 9, 2022) He was a music and television pioneer, who was the definition of “Unsung.” Today, we are sad to report the passing of Adam Wade (born Patrick Henry Wade), at age 87.

(July 9, 2022) He was a music and television pioneer, who was the definition of “Unsung.” Today, we are sad to report the passing of Adam Wade (born Patrick Henry Wade), at age 87.

It is with deep sadness that we inform you of the passing of our husband, father, brother, friend, Adam Wade. Arrangements are being made for his memorial and we will keep you updated; it is a great loss for everyone who knew and loved him.
Please keep our family in your prayers.
With deep sorrow,
The Wade Family

Wade broke out as a singer in the early 60s boasting a Johnny Mathis easy listening style, hitting the Billboard Top 10 with three consecutive singles, “Take Good Care of Her,” ”As If I Didn’t Know,” and “The Writing On The Wall.” His rangy first tenor voice was as smooth as it was attractive.

Following a decade of success on the music charts, Wade turned his attention to television, where became a pioneer in the mid-70s as the host of the game show, Musical Chairs --  the first African-American national game show host. It began a flourishing television career, including several acting roles in both soap operas and several prime time shows.

In the third leg of his career, Wade conquered the stage, appearing in several musical stageplays during the latter part of the 20th century, and ultimately returning to the stage in The Color Purple in the 00s. He continued to perform in plays and in cabaret-style singing performances right into 2022.

Adam Wade’s name has been a bit lost in the many years since his Imperial Period, but his influence on two generations of subsequent artists is undeniable. He was a talent who opened doors widely throughout the entertainment industry, and we are grateful for his contributions.

Many thanks to SoulTracker Paulette for letting us know