The Story Behind the Song: "Zoom" by the Commodores 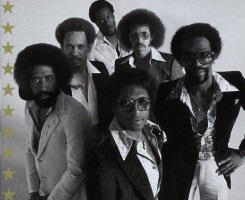 Publisher's Note: As a special treat for SoulTrackers, Jo-Ann Geffen, co-author of "Chicken Soup for the Soul: The Story Behind the Song," a great book that includes interviews with artists about the makings of many now-classic songs, has agreed to share with us some of the stories from the book (which is now available as an e book at Amazon.com), including this one about the Commodores. To check the book out, click on the cover to the right.

Publisher's Note: As a special treat for SoulTrackers, Jo-Ann Geffen, co-author of "Chicken Soup for the Soul: The Story Behind the Song," a great book that includes interviews with artists about the makings of many now-classic songs, has agreed to share with us some of the stories from the book (which is now available as an e book at Amazon.com), including this one about the Commodores. To check the book out, click on the cover to the right.

On Ronald LaPread of the Commodores: I've known Ronald and the Commodores since the group first auditioned for Suzanne De Passe at Lloyd Price's Crawdaddy Club on Broadway in NYC in 1970. As close as we all were, I had no idea of the details of the sad and poignant love story that Ronald lived through not long after. Readers may need as handkerchief for this one. His ability to survive, thrive and make such amazing musical contributions are a testament to his strength and, like many stories in this book, give us hope and faith that we can persevere despite our individual heartaches and traumas. After I finished the story and the book, I told him that I was sorry I didn't know everything he went through so I could have been there for him more back then. His response was simply, "It doesn't matter. You're there now." I'm honored that he chose me to share this story with for the first time.

We were getting ready to record the self-titled album Commodores. I was driving from my hometown of Tuskegee, Alabama with my wife, Cathy, riding next to me, going to gigs in  Tennessee, somewhere in Kentucky, and somewhere in North Carolina, leading up to a Madison Square Garden show.  On the way to Nashville, she laid down in the back seat of the car, saying that her stomach hurt.  We got there, played the first gig and got back in the car right after the show to drive to Knoxville for another date. Again Cathy laid down in the back seat with stomach pains.  I told her that we were going to the doctor as soon as we got back. That Monday we went to the hospital in Birmingham, where Cathy was from and her mom lived, and the doctor said that he wanted to do exploratory surgery.  It was scheduled for that Friday, the day before the Madison Square Garden concert.  The doctor said it would take 45 minutes so I planned to catch a plane to New York immediately after the procedure.

We left our house in Tuskegee at 6AM for the two hour ride to Birmingham for an 8:30AM surgery.   At 9:30, I was expecting her to come out of the operating room. 9:30 came and went; 10:30 came and went; at 11:30 she was still in there. I missed two planes but wasn't leaving. About 12:10PM the doctor came out and told me that she had massive tumors in her womb. He gave her about two months to live. She was 23 years old.

I finally left at about 3PM for New York. The plane had to circle for an hour and when I landed, one of our crew members met me and I got dressed in my stage uniform in the car. We played that gig and another the following night and I left immediately to go get Cathy in Birmingham and take her back to Tuskegee.  When we got home, she went to bed.

I sat down at the piano and started fiddling around. Cathy got out of bed and came and sat down beside me. She told me that there were nice changes but the melody should go up at a certain place. We sat there for about an hour and worked out the music.

The Commodores had a listening session soon after and I played them another song I'd written, which they didn't like.  I happened to have the tape for this song on me, although it didn't have any words yet. I played it and they asked what it was called. I said, "It's like.... Zoom" and the name stuck.  I played it for our producer, James Carmichael, and he said it was nice but it needed a middle. He told me that (Lionel) Richie had a song with a middle and no beginning and he put us together to combine our songs.

The group went into the studio before the words were done and we cut the track.  I took the cassette home to work on, but I couldn't get Cathy out of my mind.

The first lines that came to me were:

I may be just a foolish dreamer
But I don't care
'Cause I know my happiness is waiting out there somewhere.

Zoom
I'd like to fly far away from here

By then we were back in Los Angeles and Cathy was in the hospital there so I could go back and forth from the studio and spend time with her. She wasn't doing well. I told Richie that I couldn't focus on it so he finished the words and recorded the lead vocal. He captured everything I was feeling.  It was very quiet in the studio when they played it for me. When the song finished, everyone was crying. They knew where it came from.

We returned to Tuskegee and the Commodores were about to go to Europe on tour. I told them I didn't want to leave and they should get a bass player to replace me during that time, but Cathy insisted that I go. She said, "I'll be here when you get back."

The tour started in the UK, in London, and then we went to Glasgow.  We stayed in an old mansion that had been converted to a hotel. The rooms were huge. They had  12' ceilings and there were six windows all around the room with the bed in the center.  One of the windows looked out over a cemetery that was lit at night.

At about 2AM something woke me up.  The curtains were blowing as if wind was coming in but when I went to the windows to close them, I realized they weren't open. There was a loud knock at the door and Lenny Guice, one of our crew members and a friend of mine who was very close to Cathy, was standing there. He had the same view from the window in his room down the hall.  He looked shaken and said, "What's going on!?" and described the same experience I had.  Then, suddenly, the lights in the cemetery went out.  Two minutes later the phone rang and it was Cathy's mom telling me that Cathy was in a coma. I asked her to put the phone next to Cathy's ear and I told her I was on my way home and I'd see her the next morning.  She woke up, or in her coma, she said, "I'll be waiting for you."

I got on the Concorde and was in Birmingham, Alabama in two and a half hours. I went to her mom's house and Cathy somehow got out of bed and hugged and kissed me. I put her back in bed and her mom had to give her a shot of morphine because she was in a lot of pain. She said, "I'm sorry we didn't have any kids." I responded by saying, "Don't worry, we'll do that later" and she said, "I don't think so" as she took her last breath.

The rule with the Commodores was that the best song on any given album was the single. When that album came out, they all agreed that "Zoom" was the best song, but didn't want to release it as the single so people would have to buy the album to get the song. The album did sell millions of units.

I was on stage playing with Richie not too long ago, 35 years after we wrote this song, and the excitement of 80,000 people getting up out of their seats cheering was a great tribute.