A concert celebration of the late Bernard Wright coming 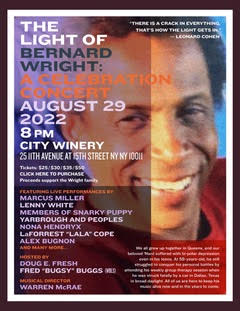 Known for his 1985 smash hit single Who Do You Love funk and soul star Bernard Wright’s music was the driving force behind many of Hip Hop’s greatest hits. His music was sampled by some of the greatest pioneers of rap in Hip Hop history that catapulted their hits to the top of the charts. Wright’s music was sampled by many including LL Cool J, Snoop Dogg, Dr. Dre, Ice Cube, Yo-Yo, and Skee-Lo. The godson of the legendary Roberta Flack, Wright collaborated with many artists which included Doug E. Fresh, Miles Davis, Bobby Brown, Cameo, Marcus Miller and more. In speaking about the upcoming event, all of the artists collectively expressed their love and gratitude stating, “We all grew up together in Queens, and our beloved 'Nard suffered with bi-polar depression even in his teens. At 58-years-old, he still struggled to conquer his personal battles by attending his weekly group therapy session when he was struck fatally by a car in Dallas, Texas in broad daylight. All of us are here to keep his music alive now and in the years to come”.