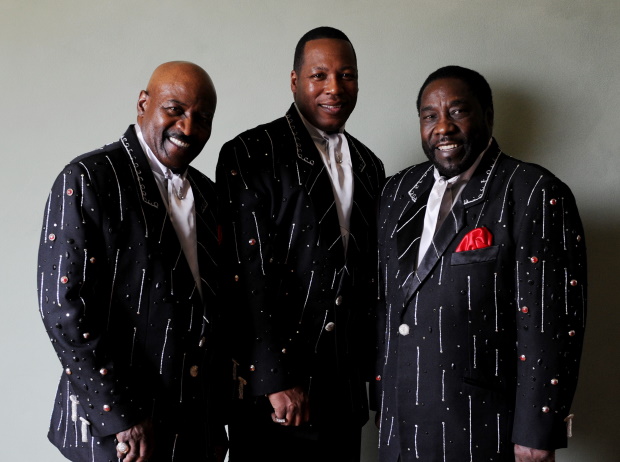 (December 2, 2019) By any measure, they are one of the most important Soul Music groups of all-time. Whether delivering funky dance music, romantic ballads, or thoughtful social commentary in song, The O'Jays are 100% all-time greats. And we're proud to announce that they are the SoulTracks Lifetime Achievement Award winners for 2019, as part of the SoulTracks Readers' Choice Awards, which are slated for December 9.

(December 2, 2019) By any measure, they are one of the most important Soul Music groups of all-time. Whether delivering funky dance music, romantic ballads, or thoughtful social commentary in song, The O'Jays are 100% all-time greats. And we're proud to announce that they are the SoulTracks Lifetime Achievement Award winners for 2019, as part of the SoulTracks Readers' Choice Awards, which are slated for December 9.

In a message to SoulTrackers, the O'Jays write: “It’s an honor to receive the SoulTracks’ Readers Choice Lifetime Achievement Award this year.  We truly appreciate the recognition, and the great loyalty that our fans have had for us over the years.  The fans are the reason why we have endured, and inspire us to bring new music to new generations with our latest album, 'The Last Word.'  We hope that the words of our messages for social equality are carried on for many years to come.”

Originally a regionally popular act in Cleveland (and in fact named after local deejay Eddie O'Jay), the group was together for a decade before getting a major break by teaming with young songwriter/producers Kenny Gamble and Leon Huff.  Then a quintet, The O'Jays (Eddie Levert, Walter Williams, Bill Isles, Willam Powell, Bobby Massey) had a number of minor hits together on Chess Records in the late 60s and early 70s; but frustration with their lack of real success pared the group down to the trio of Levert, Williams and Powell by 1972.  And it was that lineup that recorded the group's first album on Gamble & Huff's Philadelphia International Records, Backstabbers. Backstabbers was a triumph, highlighted by the McFadden & Whitehead-penned title track.  The haunting song with the great intro (later sampled by Angie Stone on "I Wish I Didn't Miss You") became a monster hit, and was followed by the even bigger "Love Train."  It also began a string of critically acclaimed and commercially popular albums.

As the 70s ended, the Gamble & Huff sound became more familiar -- even formulaic -- but the O'Jays' albums continued to include fine material and always wonderful vocal performances.  Generally forgotten early 80s releases such as When Will I See You Again and Love and More featured some of the group's best ballads, but found a more limited audience acceptance.  With their crossover days largely behind them, the O'Jays began focusing on writing more of their own material and continued to adjust to changes in the sound of popular black music, ultimately leaving the Gamble & Huff fold.  They continued to score sporadic hits, such as the rap-introed "Have You Had Your Love Today" and the gospel-like cover of Bob Dylan's "Emotionally Yours." During that period Eddie Levert also made a terrific album with son Gerald, who was then a rising solo star and leader of the popular group Levert.

Unlike many of their 70s soul counterparts, The O'Jays never stopped successfully recording, including 2017's contribution to the Brawl in Cellblock 99. However, the O'Jays have faced their share of struggles, too. Levert suffered a parent's nightmare, with the deaths of his sons Gerald and Sean in 2007 and 2008. And in 2010, Williams revealed that he had been suffering from multiple sclerosis for years.

But the group has soldiered on, celebratung their 60th anniversary together and, earlier this year, releasing a fantastic album with an equally powerful message. The Last Word recaptured that O'Jays magic on record, becoming one of the year's best R&B albums. If you haven't heard it, check it out. All three members have also recorded solid solo albums over the past few years.

With Levert living in Las Vegas and Williams and Grant in Cleveland, the group members continue to come together to perform around the world and are still bringing it as they enter their seventh decade together. In early 2018, the O'Jays announced on CBS that they would be performing for two more years before retiring. But in the meantime, they're packing in the crowds wherever they go, and are bringing joy to fans around the world.

We're proud to present this Lifetime Achievement Award to the O'Jays, and thank them for 60 years of greatness!