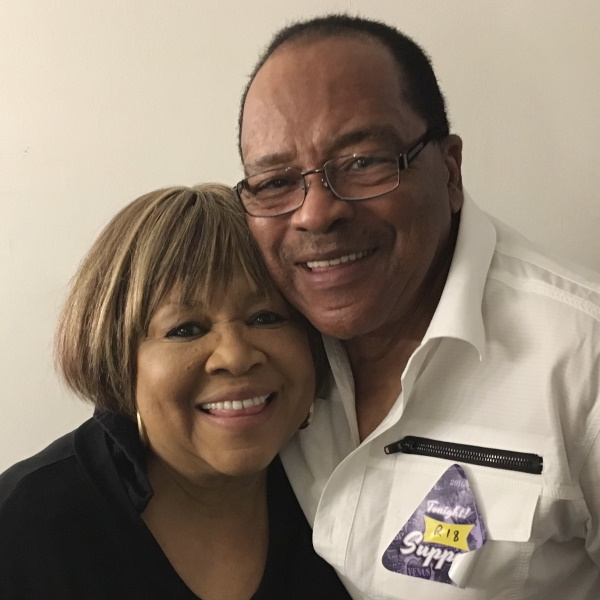 Photo of Mavis and Pervis Staples. All photos courtesy of Bill Carpenter

(May 12, 2021) Pervis Staples, a co-founding member of the legendary gospel group, The Staple Singers, passed away suddenly on May 6, 2021 at his home in Dolton, Illinois according to Adam Ayers, a member of Mavis Staples’ 525 Worldwide Music management team. He was 85 years old. Beginning in 1956 with “Uncloudy Day” on Chicago’s Vee Jay Record label and stretching into the early 1980s, the Staple Singers were one of the most influential acts in gospel, soul, and social protest music. Their signature songs such as “Uncloudy Day,” “Why Am I Treated So Bad,” “Respect Yourself” and “I’ll Take You There” are hailed as soul music masterpieces.

(May 12, 2021) Pervis Staples, a co-founding member of the legendary gospel group, The Staple Singers, passed away suddenly on May 6, 2021 at his home in Dolton, Illinois according to Adam Ayers, a member of Mavis Staples’ 525 Worldwide Music management team. He was 85 years old. Beginning in 1956 with “Uncloudy Day” on Chicago’s Vee Jay Record label and stretching into the early 1980s, the Staple Singers were one of the most influential acts in gospel, soul, and social protest music. Their signature songs such as “Uncloudy Day,” “Why Am I Treated So Bad,” “Respect Yourself” and “I’ll Take You There” are hailed as soul music masterpieces.

Pervis Staples was born November 18, 1935 in Drew, Mississippi. His family moved to Chicago for economic opportunities, and he was raised on the city’s Southside where his guitar-playing father, Roebuck “Pop” Staples, started teaching his children gospel songs to entertain them and occupy their time. Eventually, word spread throughout the Chicago church community about the singing family, and they cut their first recordings for a local label, United Records. However, it’s when they started recording for Vee Jay Records that they gained a national following with rootsy songs such as “So Soon,” “If I Could Hear My Mother Pray Again,” “Will the Circle Be Unbroken,” and “Uncloudy Day” – which has been reported to have sold a million copies.

The early Staples sound was constructed around Pop Staples’ lite tenor and his understated, blues-influenced guitar playing. Surrounding it, was his teenaged daughter, Mavis’ raspy contralto; his daughter, Cleotha’s soprano; and son Pervis’ warm tenor.  “Pervis’ childhood was filled with wonderful experiences,” Mavis Staples remembers. “He liked to think of this period of his life as setting the stage for all that he wanted to do in life. Some of Pervis’ best friends as a youngster included Sam Cooke, Lou Rawls, and Jerry Butler. Pervis and the guys would stand under the lamp posts in the summertime singing doo-wop songs.”

Mavis’ unusually low voice on most of the songs led many to assume that was Pervis singing. “We’d trick ‘em,” Pervis told journalist Greg Kot in his Mavis Staples biography, I’ll Take You There (Scribner). “The audience would be looking for me to come up with the low part – this was for the people who heard the record but had never seen us before, I’d come up to the mike and switch over at the last second where Cleotha was, then Mavis would step up. That messed them up, but it woke up the crowd.” After graduating from the Dunbar Vocational Career Academy, Pervis served in the U.S. Army where he served with the Field Evaluation Agency and was a member of the U.S. Army Choral Group. While he was away from the group, his sister, Yvonne, stepped in to sing. After he was honorably discharged, he returned to the group.

Pop Staples had routinely turned down offers for the group to record R&B music as he felt it was a conflict with his faith. Pervis witnessed friends such as Lou Rawls and Sam Cooke crossover and he kept nudging his father to expand the group’s repertoire. The compromise was message music after they signed with Riverside Records in 1961. The family became fast friends with folk artists like Bob Dylan on the festival circuit. Pervis and Dylan were close. In Kot’s book, Pervis recalled Dylan showing him the song, “A Hard Rain’s Gonna Fall” at the President Hotel in 1962.  He lobbied Pop Staples to let the family record it. He did and it was done as a duet between Mavis and Pervis for the 1966 LP, This Little Light of Mine (Epic Records).  Although Mavis opened the song, Pervis led the bulk of it in a smooth, mellow, and commanding voice that was reminiscent of his father’s but uniquely his own. Another stand-out solo for Pervis was his lead on The Staple Singers’ remake of Hank Williams’ 1952 cut, “Be Careful of the Stones You Throw,” on their 1965 LP, Amen (Epic Records). Underneath a gentle southern-blues melody, Pervis recites the song in a pleasing tone as his sisters provide urgently earnest background vocals for the morality tale about a young girl who is killed saving the child of a woman who had gossiped about her.

Pervis’ last album with The Staple Singers was their first for Stax Records, Soul Folks in Action (Stax Records), in 1968. The album featured new songs such as “The Ghetto” and their interpretations of tunes like Otis Redding’s “(Sittin’ On) The Dock of the Bay” and The Band’s “The Weight.” In Kot’s book, Steve Cropper, an iconic session musician at Stax Records, credited Pervis with helping him with production on the album. “If I had an idea, he would work with the girls and stretch the idea,” he said. “He would become the band leader, work with them over and over. Every idea wouldn’t work right away, so he’d work on it until they got it right.”

Pervis is also featured on duets with Carla Thomas on “I’m Trying” and “It’s Unbelievable How You Control My Soul” for the LP, Boy Meets Girl (Stax Records), in 1969. He also appeared on the all-star, “Soul-A-luja,” track that featured Stax artists such as Johnnie Taylor, William Bell, and Mavis Staples. It’s during this period that Pervis left the group to begin managing another Chicago act, The Hutchinson Sunbeams, who later became known as The Emotions.  He was involved with several business ventures, including Perv’s House, a successful nightclub that was one of the most popular nightlife spots on the south side in the 1970s.

The Staple Singers were awarded the Rhythm & Blues Foundation’s Pioneer Award in 1992. They were inducted into the Rock and Roll Hall of Fame in 1998 and earned a Grammy Lifetime Achievement Award in 2005. They were also inducted into the Nashville-based Gospel Music Hall of Fame in 2018. “Pervis was one of a kind- comical and downright fly,” Mavis Staples recalls.  “He would want to be remembered as an upright man, always willing to help and encourage others.  He was one of the good guys and will live on as a true Chicago legend.”