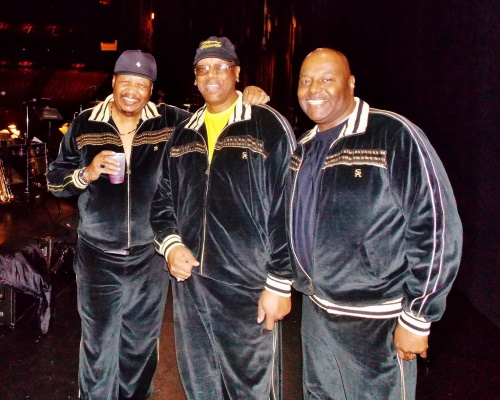 Photo courtesy of The Legendary Escorts

(July 12, 2020) We are sad today to inform SoulTrackers of the death of the great Reginald “Reggie” Haynes of the fantastic 70s vocal group, The Escorts. He was 71. Of all the sweet and satin-voiced groups to grace the R&B charts in the early to mid-70s, The Escorts have one distinction (which some consider somewhat dubious) of being the one and only team to have started their recording career behind bars!   Any discussion of the seven-man group has inevitably focused on that fact but beyond the circumstances of their recording situation, The Escorts' work actually merits considerable acclaim and praise.

(July 12, 2020) We are sad today to inform SoulTrackers of the death of the great Reginald “Reggie” Haynes of the fantastic 70s vocal group, The Escorts. He was 71. Of all the sweet and satin-voiced groups to grace the R&B charts in the early to mid-70s, The Escorts have one distinction (which some consider somewhat dubious) of being the one and only team to have started their recording career behind bars!   Any discussion of the seven-man group has inevitably focused on that fact but beyond the circumstances of their recording situation, The Escorts' work actually merits considerable acclaim and praise.

The Escorts - aided by renowned producer George Kerr - made some fine music, from covers of tunes popularized primarily by The Miracles such as "Ooh Baby Baby," "We've Come Too Far To End It Now" and "I Can't Stand To See You Cry" (the latter two post-Smokey charted singles) to original songs such as "All We Need Is Another Chance" and "Disrespect Can Wreck" written specifically for the group.

The Escorts' history dates back to 1969.  In a rare 1974 interview for Britain's "Blues & Soul" magazine completed just one day after a week-long stint at the famed Apollo Theater in New York, original member Haynes recalled, "It started when I was transferred to Rahway Prison in New Jersey.  While all the other guys were playing basketball or baseball...a group of us used to get together and sing all the time..."

The change in The Escorts' fortunes began two years later when producer Kerr came to the prison.  Kerr had been invited to check out an annual Inmates Variety show in the facility by singer Linda Jones, whose brother was incarcerated at the time.  A former Motown songwriter and producer who had also been a member of the group The Serenaders and spent a period of time replacing Little Anthony with The Imperials, Kerr had been working with Linda for a couple of years, enjoying success with such hits as "Hypnotized" and "That's When I'll Stop Loving You."

Recalls Kerr, who masterminded all of The Escorts' work, "Originally, I didn't feel like going but once I was in the prison and I heard all these musicians, I liked what I saw.  I remember turning to my wife and telling her I thought it would be great to record the group.  She thought I was out of my mind and that I was never going to get it done.  I started talking to the prison warden and explained that I was a professional record producer and he had the same reaction.  The moment he said, â€˜you can't!' I remembered a time when I'd said that same thing to (producer) Richard Barrett when he was doing a session with me and The Imperials.  He told me, 'don't ever use that word around me!' and when the warden said the same thing to me, that gave me the incentive to show I could do it, I could record these guys, even in prison."

Kerr persisted in his mission and five hundred letters and two years later, a mobile recording truck pulled up outside Rahway Prison.  "I did some research and found out that it cost about $964 to house an inmate and that if the authorities let me record them, they could pay for themselves," says Kerr. "I went before the Superintendent of Prisons in Washington DC and explained that to them.  It took a lot of work but they eventually gave me permission to record The Escorts."

As Reggie Haynes explained in his 1974 interview, "During those two years, guys came and guys went and the group that actually recorded the first LP, All We Need Is Another Chance, was almost completely different from the group that George saw at the Variety show.  Happily, we always had the good fortune to find good singers and as the project grew, the guys involved took it more and more seriously."

The actual line-up for the first album consisted of Haynes, Lawrence Franklin, Robert Arrington, William Dugger, Stephen Carter, Frank Heard and Marion Murphy, with Carter - obviously influenced by Smokey Robinson - as lead singer on a number of songs.   Kerr worked with arranger Bert Keyes on preparing the tracks at Venture Sound studios in nearby Somerville, New Jersey after rehearsing the group on regular visits to Rahway over a period of five months at a piano in the prison auditorium.  "We actually did the vocals in the psychiatric ward because it was sound-proofed!" says Kerr. "Before we did the sessions, I was on the phone to all of the New York newspapers and television stations to tell them what we were doing and when I got to the prison, there were all these newsmen with cameras..."

After seeing Kerr on the news, a construction company that was planning to start a record label contacted him and The Escorts became the first act signed to Alithia Records.  In all, Kerr cut eleven tunes on the group over a fourteen-hour period.  Included on that first album were remakes of two songs the produced had cut with The O'Jays, "Look Over Your Shoulder" and "I'll Be Sweeter Tomorrow" and those two cuts ended as the first two charted singles for The Escorts, both reaching the R&B Top 100.

Haynes was the first of the inmates to be released and in June 1973, he began promoting the group's work.  As he stated in '74, "People were aware of The Escorts and of course, we were somewhat unique so press people and radio stations listened.  They were naturally inquisitive and some were for us and some hostile towards us.  You have to understand that we were in a maximum security prison and some folk don't understand that we have paid for our mistakes."

Other tunes from the group's first album included covers of "By The Time I Get To Phoenix," "Little Green Apples" and the doo wop classic "I Only Have Eyes For You" along with "All We Need Is Another Chance," a song that referenced  the group's personal situation as inmates hoping to return to society to lead productive lives, which became the obvious title track for The Escorts' debut.

The album did manage to gain airplay most up and down the East Coast and not content with recording the group, Kerr felt that a live concert would also be a milestone: "After the album came out, we got all these letters from people who wanted to see them.  I went back to the Superintendent of Prisons and asked if we could do a show..."  With much negotiation and with thirty policemen on duty to ensure security, The Escorts performed at Newark Symphony Hall, shackled on the way to and from the venue but clad in tuxedos and dress shoes for the show, which was a sell-out and major success.

On the heels of the concert, Kerr decided to make a second album: three of the members of the group - Haynes, Franklin and Willie Quick, a longtime friend of Haynes who had replaced Stephen Carter (then serving a life sentence) - were out of prison while the other four remained inside hence the title of the group's sophomore project, "3 Down, 4 To Go."  In a twist of irony, the three freed former inmates had to go back into Rahway for the recording of the album which included the R&B-charted singles "Disrespect Can Wreck" and the ballad "Let's Make Love (At Home)."  Recalled Haynes in '74, "...Who do you know that walked into a prison of their own free will!  We recorded [the second album] in exactly the same way as before except that I was able to be there when the tracks were recorded this time."

The album featured a cover of The Delfonics' "La La Means I Love You" along with several original tunes such as "Brother" and "Corruption" and after its release in 1974, Haynes, Franklin and Quick did some dates including the afore-mentioned stint at The Apollo. Legal issues caused the group to split by the end of the decade, but the music lived on.

Haynes found a second life for The Escorts on the road, performing well into the new millennium. The group, now called The Legendary Escorts, has recently consisted of Haynes (often called "Prophet"), William "Billy" Martin and La'Grant Carlos Harris, and has performed the biggest group hits around the world. Many fans will be heartbroken over this news of a great act that overcame so much to bring joy to music. Rest in Peace, Mr. Haynes.

We thank SoulTracks friend David Nathan for the majority of this biography. http://www.soulmusic.com/