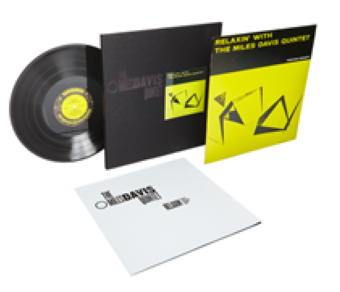 Los Angeles, CA (April 13, 2022)—Craft Recordings is proud to announce Relaxin’ with the Miles Davis Quintet as the latest release in its acclaimed Small Batch audiophile series. A pivotal title in Miles Davis’ incomparable catalog, this 1956 recording features a who’s who of jazz greats, including John Coltrane on tenor saxophone, Red Garland on piano, Paul Chambers on bass, and Philly Joe Jones on drums. Coinciding with Jazz Appreciation Month, the album is available for pre-order this Friday (April 15th) at 2:00pm PST / 5:00pm EST exclusively through CraftRecordings.com, and is limited to 5,000 copies worldwide.

Los Angeles, CA (April 13, 2022)—Craft Recordings is proud to announce Relaxin’ with the Miles Davis Quintet as the latest release in its acclaimed Small Batch audiophile series. A pivotal title in Miles Davis’ incomparable catalog, this 1956 recording features a who’s who of jazz greats, including John Coltrane on tenor saxophone, Red Garland on piano, Paul Chambers on bass, and Philly Joe Jones on drums. Coinciding with Jazz Appreciation Month, the album is available for pre-order this Friday (April 15th) at 2:00pm PST / 5:00pm EST exclusively through CraftRecordings.com, and is limited to 5,000 copies worldwide.

Carefully curated from Craft’s vast catalog of titles, each release in the Small Batch series offers discerning listeners the highest-quality, authentic sound—distilled to its purest form. Since launching in early 2020—debuting with John Coltrane’s Lush Life, followed by Yusef Lateef’s Eastern Sounds—the series has drawn praise from critics far and wide. Absolute Sound raved, “the sound is exceptionally detailed, present, and airy, with gorgeously rich instrumental tones and textures, excellent dynamic scaling, and a notable lack of groove noise that brings these performances to goosebump-raising life,” adding, “the deluxe packaging and accompanying notes are likewise top-tier...Don’t hesitate.” UK’s Record Collector declared, “Craft [has] done a superlative job; the packaging is elegant, and the sound is flawless...there’s a depth and vivacity that brings out the best in these sessions.” Hi-Fi Choice added, “there’s no denying the beauty of this impeccable pressing.”

As with previous Small Batch albums, Relaxin’ with the Miles Davis Quintet was mastered from its original analog tapes by Bernie Grundman and pressed on 180-gram vinyl at RTI using Neotech’s VR900 compound and a one-step lacquer process—as opposed to the standard three-step process—allowing for the utmost level of musical detail, clarity, and dynamics while reducing the amount of surface noise on the record. The limited nature of these pressings guarantees that each record is a true representation of the original lacquer and is as close as the listener can get to the original recording.

Each pressing of Relaxin’ is individually numbered and encased in a foil-stamped, linen-wrapped slipcase featuring an acrylic inset of the original artwork. The vinyl disc—extractable through a unique, frictionless ribbon pull tab—is housed in a reproduction of the album’s original tip-on jacket from Prestige Records and protected by an archival-quality, anti-static, non-scratching inner sleeve. New liner notes from the GRAMMY® Award-winning music historian, journalist, and producer, Ashley Kahn complete the package.

Relaxin’ finds Miles Davis and his legendary sidemen at the top of their game. First assembled in 1955, the trumpeter’s “First Great Quintet” became the dominant small jazz group of the era and was essential in defining the hard-bop genre. Between November 1955 and October 1956, the quintet recorded three exceptionally productive sessions with the celebrated engineer Rudy Van Gelder, who simulated the group’s nightclub sets at his Hackensack, NJ studio. The resulting 32 tracks would make up six significant albums: 1956’s Miles: The New Miles Davis Quintet, 1957’s Cookin’, 1958’s Relaxin’, 1959’s Workin’, and 1961’s Steamin’.

What is most notable in these sessions—and particularly in Relaxin’—is the deft interplay between the supremely talented musicians. “The sidemen [Davis] had chosen emphasized rhythmic dexterity and strong, individual styles that sometimes complemented and—to some ears—seemed discordant and contradictory,” writes Kahn in his liner notes. “The lineup was a study in contrast—Miles’ languid, sparse phrasing next to Coltrane’s explosive, hard-edged verbosity, Garland’s sophisticated voicings and Chamber’s penchant for arco solos, alongside Jones’ rootsy rhythmic propulsion.”

Kahn continues, “When melodic lines were smartly shared or handed off between different players, disparate ideas would suddenly lock in together…. It was about delicacy and muscle. It was about drops and shifts and surprises. Often the group reimagined song structures more as sectional exercises, one feel or groove morphing into another.”

Those deft collaborative moments can be heard throughout the six selections on Relaxin’, which are split between bebop standards (Dizzy Gillespie’s “Woody’n You,” Sonny Rollins’ “Oleo”) and Broadway balladry (“I Could Write a Book,” “You’re My Everything,” “It Could Happen to You,” and “If I Were a Bell”). The latter tune, from the musical Guys and Dolls, was released as a single alongside the album and has long been considered a standout track. Kahn argues that this rendition made “If I Were a Bell” a jazz standard, while Garland’s work on the song “cannot be overstated…His piano solo—replete with a block-chord sequence that reminds all of the song’s lyric and lilt—is among his most masterful at Miles’ side.”

While Relaxin’ and its sister albums have long been celebrated in the jazz canon, it’s interesting to note that they were initially recorded as a contractual obligation to Prestige, Davis’ label during the early ’50s. Davis’ star was rising, and he wanted to take advantage of more lucrative opportunities. Betting on himself, Davis knew it would be a win-win situation for all parties involved. Indeed, by the time that Prestige released Relaxin’ in 1958, Davis had soared to new heights, both commercially and creatively, and was just months away from recording his best-selling masterpiece, Kind of Blue.

Today, Relaxin’ remains an enduring classic and a perfect encapsulation of the hard-bop era. “From one generation to the next, Relaxin’ fast becomes familiar territory, and deservedly so,” asserts Kahn. “It remains a must-listen for those who would know or play modern jazz or improvisational music. It stands both as a historic statement and one of the brightest assets in the Prestige Records catalogue.”

Subscribe at CraftRecordings.com and follow @craftrecordings for news first on future Small Batch pressings (make sure to opt-in to the Small Batch Alerts dedicated newsletter).

For more information and to pre-order Relaxin’ with the Miles Davis Quintet, visit CraftRecordings.com/SmallBatch.