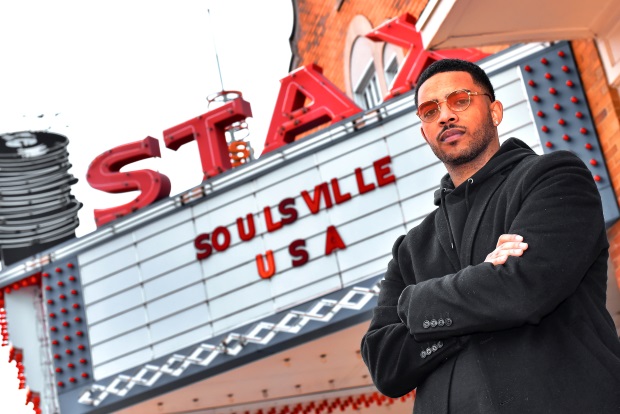 (February 24, 2019) She has written for Rihanna, Kanye West, Demi Lovato, Beyoncé, Ariana Grande, Christina Aguilera, and co-wrote “FourFiveSeconds,” the first Top Ten hit for Paul McCartney in 29 years. In 2017 she was a recipient of ASCAP’s Women Behind the Music Awards. And she is a product of the Stax Music Academy in Memphis, Tennessee, the renowned music institute at the original site of Stax Records, the label that launched the careers of icons such as Otis Redding, Isaac Hayes, Booker T. & the MGs, the Staple Singers, and 2019 GRAMMY Lifetime Achievement Award winners Sam & Dave.

(February 24, 2019) She has written for Rihanna, Kanye West, Demi Lovato, Beyoncé, Ariana Grande, Christina Aguilera, and co-wrote “FourFiveSeconds,” the first Top Ten hit for Paul McCartney in 29 years. In 2017 she was a recipient of ASCAP’s Women Behind the Music Awards. And she is a product of the Stax Music Academy in Memphis, Tennessee, the renowned music institute at the original site of Stax Records, the label that launched the careers of icons such as Otis Redding, Isaac Hayes, Booker T. & the MGs, the Staple Singers, and 2019 GRAMMY Lifetime Achievement Award winners Sam & Dave.

Kirby Dockery, a DeSoto County, Mississippi native who goes by the moniker KIRBY, attended the Stax Music Academy in the mid-2000s, earning a scholarship to the Berklee College of Music upon graduation. She left Berklee after two years “to become famous,” she says, but fame and success initially eluded her and she found herself back in Memphis working in a restaurant. However, she didn’t give up on her dreams to be in the music business and, after posting an original song on YouTube every day for more than 200 consecutive days, she drew the attention of Jay Z, who signed her to his Roc Nation Entertainment Company as a songwriter.

With just a few years of songwriting success under her belt, KIRBY decided to come back and give back at the Stax Music Academy, which serves primarily inner-city youth who have taken the Stax sound around the world to places like Australia, Italy, France, England, Germany, New York’s Lincoln Center, and two gigs so far for the Smithsonian Institute: Their 2011 Folklife Festival on the National Mall and 2016’s grand opening festival for the Smithsonian’s National Museum of African American History and Culture.

Kirby is now the first-ever Stax Music Academy graduate to serve on the board of directors for the Soulsville Foundation, which oversees the Stax Music Academy, Stax Museum of American Soul Music, and The Soulsville Charter School. She also just established the “The Kirby Dockery A Song A Day Songbird Scholarship” at Stax Music Academy, which requires students create an original piece of music, of any genre and submit it via video. (Cell phone video is permitted.) The scholarship funds SMA tuition for three students for a year. Tuition for the after school program is $1,000 per year.

According to Kirby, Stax Music Academy was more than an after-school program: It was the bridge between her dreams and reality.

“As soon as I got across the DeSoto County [Mississippi] line, and entered that parking lot something within me came alive,” she said. “I was exposed to a music community I didn’t even know existed in Memphis. It was there, at Stax Music Academy, where I heard my first original song put to music. It was there, on the corner of East McLemore where I refined my craft and gained the courage to apply and later attend Berklee College of Music. It was there; where I learned that music wasn’t just a hobby it could be my profession. Stax Music Academy was an incubator for my dreams. I do not believe I would be where I am today had I not been connected to that music program.”

KIRBY is just one Stax Music Academy graduate making headlines, making it in the music business, and remaining a part of what the academy calls its “Stax Music Academy family.” Graduate Evvie McKinney (2015) won the first season of Sean Combs’ reality show The Four last year and is now signed to Republic Records in Los Angeles working with Combs and Meghan Trainor on new, original material. Others have traveled around the world with soul legends William Bell, Otis Clay, Bobby Rush, and others to promote Martin Shore’s 2015 documentary Take Me to the River, which also starred Bobby “Blue” Bland and Snoop Dog. And each summer, Stax Music Academy graduates who are in college but home on summer break form a Stax Music Academy Alumni Band are paid to perform in the Stax Museum of American Soul Music and at B.B. King’s Blues Club on iconic Beale Street.

“We are trying to keep as many of our graduates as possible engaged with us through adulthood,” said Stax Music Academy spokesman Tim Sampson. “It’s important that we offer them this ‘family’ to belong to because we know youth does not stop at high school graduation or even college graduation. Many of them have a deep desire to give back to the academy that helped them through music education and mentoring and some are coming back to teach and volunteer.”

Another one of those former students is Kameron Whalum, who the Stax Music Academy announced February 11th as its new Artist in Residence. A student early in the academy’s programming in 2003 and 2004, Whalum went on to become and currently is Bruno Mars’ trombone player, performing with Mars on the MTV EMA’s, MTV VMA’s, Billboard Music Awards, Canada’s Much Music Awards, the GRAMMY’s, the halftime show of both NFL Super Bowl XLVIII and Super Bowl 50, and a voice and trombonist of the GRAMMY Award winning song, “Uptown Funk.”

“Since we started the Stax Music Academy in 2000 with 125 students,” Sampson continues, “we’ve served over 4,000 students, mostly very young students until we changed our model in 2007 and 2008 to serve older students with a more intensive music education model. Now, we are starting to see the results of our work with these students growing up and doing such amazing things. To have KIRBY on our board of directors and establishing scholarships and to have Kameron Whalum come give back and mentor our current young people is more than we could have ever asked for for. It’s proof that music can change lives and that is what we are here to do.”