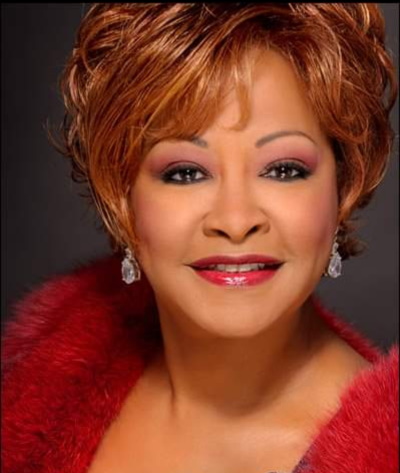 (March 31, 2021) In every genre of music, there are bands or groups that are successful as a unit but, while we love them collectively, the truth is: Each artist within those musical acts has his or her own creative identity, and many times the best way to express that is with an album of their own -- one that reflects their unique personality and musical tastes.

(March 31, 2021) In every genre of music, there are bands or groups that are successful as a unit but, while we love them collectively, the truth is: Each artist within those musical acts has his or her own creative identity, and many times the best way to express that is with an album of their own -- one that reflects their unique personality and musical tastes.

That is the case with Valerie Holiday of The Three Degrees.  For more than 50 years, she has been entertaining fans as part of this legendary girl group, which holds the Guinness Book of World Records’ distinction of being the longest-running female vocal group in history. The Three Degrees are known for singing one of the most successful songs of the Philly Soul era - the 1974 international hit "When Will I See You Again."  Thanks to that hit record and many more including "TSOP" (aka the iconic "Soul Train" theme song), the female trio has performed for adoring fans worldwide for decades.  With that legacy, Valerie Holiday has recorded her debut solo album In Bloom, and is excited to release it to the world on April 4th.

In a March 2021 interview, Holiday stated that her jazz-flavored debut is something she's wanted to do for a long time. Her album had been in the works for five years, but when The Three Degrees' busy touring schedule came to a halt due to the pandemic, she finally had the time to complete it. Although this is her first solo project, Holiday is no stranger to performing alone; she was a solo artist beforejoining The Three Degrees in 1967, and has done live shows by herself over the years in between the group's tour dates.

She said her project is titled "In Bloom" because it’s her first solo album; and the cover features a slightly opening peony flower because she feels like a flower blooming by sharing this collection of songs.  Regarding the material that Holiday chose to record, she turned to standards because she 'absolutely loves lyrics' and wanted to cover such classic songs the way she felt them, not the way a record label told her to. (Holiday has the latitude to do this because she, as opposed to a record label, is in "sole control of" the album, a venture that she calls 'scary yet freeing.') The standards that she put her spin on are rooted in love, as she wanted the album to have an “intimate feel,” taking you through the different stages of a relationship.

Speaking of those stages, Holiday starts off with her catchy cover of “All I Do Is Dream of You” (“All I Do”); she says that’s the first track on the album because "when you first fall in love with someone, they’re constantly on your mind...you’re thinking about them all the time."  Next, when explaining why she selected the Billy Joel hit “Just the Way You Are,” ("Just the Way U R"),Holiday mentioned that in a relationship the object is not to change the person you’re with because their personality is supposedly what attracted you to them in the first place. Personalizing it, she said: “I recorded this song just for my husband because I love the person he is and I wouldn’t change a thing about him.”

Later, veering away briefly from the sentiment of being in love to being ready to walk away from it, Holiday tapped into Phyllis Hyman’s catalog and reimaginedher heartbreaking ballad, “Give Me One Good Reason to Stay” ("One Good Reason"). Holiday wanted to record this Gamble & Huff-penned tune because she regards the hitmaking duo - who wrote hits for both The Three Degrees and Phyllis Hyman respectively - as ‘phenomenal writers and musicians.’  The album concludes with the touching track, "What are You Doing the Rest of Your Life?" ("What R U Doing"), a tune that Holiday has performed on stage with The Three Degrees in the past. The song, which has been covered by the likes of Barbra Streisand and Sarah Vaughan, is one that Holiday has always loved; she feels that the title’s question is something you ask when you meet "that special somebody" because you need to know the answer if you both are to have a future together.

As those songs attest to, In Bloom by Valerie Holiday comes from the heart of a “woman in love,” as she sang on The Three Degrees’ 1978 UK hit. So this album can certainly resonate with those who are in love or desire to be. And speaking of love, Ms. Holiday says she loves what she does with The Three Degrees, so her debut solo album is not a departure from the trio but is a way to express her individual style, showcasing her take on songs that have personal meaning for her. That said, allow her to introduce herself to you via her debut solo album. We are sure you'll find that love is in the air… better yet, it is "In Bloom."

Hear clips from In Bloom here

Darnea N. Samuels is a Washington, DC-based sports radio producer, news personality, writer, and host of her own radio show, "The Sound of Soul with D'Nicole" on Takoma Radio, where she shares her love of classic R&B/soul music. You can read her blog here and connect with her on Twitter.