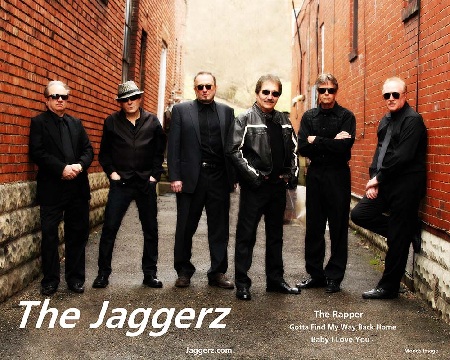 Official Biography (courtesy of The Jaggerz)

The Jaggerz are a blue-eye soul band best known for their chart topping hit "The Rapper". Their first album "Introducing the Jaggerz", a soulful R&B classic, was produced by the legendary Philadelphia International team of Gamble and Huff.  All Music Guide praised the album: “Steeped in R&B, The Jaggerz are absolutely thrilling”.  In 1970 the Jaggerz were signed by Neil Bogart to his Buddah/Kama Sutra label to release the album "We Went to Different Schools Together" and the smash hit "The Rapper" that rose to No. 1 on the Record World charts and No. 2 on Billboard charts. It went Gold with 2.5 million copies sold.  Two additional tracks “What A Bummer” and “I Call My Baby Candy” reached the Billboard Hot 100 and the album rose to 62 on the Billboard Top 200 chart.  The haunting tune "Memoirs of a Traveler" written by the Jaggerz has become an R&B classic sampled by Wiz Khalifa, The Game, Slum Village and other hip hop artists.  With the success of The Rapper The Jaggerz toured the country and appeared on Dick Clark’s American Bandstand.  In addition to their own releases The Jaggerz also appeared on recordings with Bobby Rydell, James Darren, and Wolfman Jack.  The Jaggerz released their third album “Come Again” in 1975 on RCA/Wooden Nickel Records and broke up in 1978.

The Jaggerz reunited in 1989 for reunion shows led by singer Jimmie Ross and released the albums "And the Band Played On" (1998) and "Re-Rapped" in 2001.  They continue to perform their heartfelt soulful sounds and rich vocal harmonies with founding members Jimmie Ross and Benny Faiella along with key boardist/ vocalist Hermie Granati, guitarist Dennis McAbee, and drummer Paul Martello.  “The Walk” is the first single release from a new album produced by five time Grammy winner Jay Dudt that will be released in April of 2014.

Formed by Donnie Iris and Benny Faiella in 1965 the Jaggerz were Pittsburgh’s most popular band before they went on to national success.  Donnie Iris while in college at Slippery Rock State formed a band called the Trivelles that was later renamed Donnie and The Donnelles.  They played frat parties and at a bar called "Guy's".  Around 1964, Donnie and The Donnelles merged with members of another band called Gary and The Jewel Tones to form the Jaggerz.  When two members quit Donnie and Benny recruited bassist Jimmie Ross and drummer Jim Puguliano into the Jaggerz.  Guitarist Bill Maybray and organist Tom Davies joined a few months later.

The Jaggerz began their career playing 6 nights a week at Club Natural in Beaver Falls, Pa.  In the summers of 1966 and 1967 they played the entire seasons at the Sunken Bar and the Cove at Geneva on the Lake, Ohio.  Working steadily the Jaggerz polished their act into a two hour Vegas style show. Performing tight R&B/Soul tunes they danced in synchronized steps.  The Jaggerz became Pittsburgh's most popular band packing clubs throughout Western Pennsylvania.  On Saturdays people lined up around the block to get into the Staircase Lounge in downtown Pittsburgh to see Jaggerz.  Topping their hometown market, the Jaggerz sought a record contact working with their manager Joe Rock, who also managed the Skyliners.

In 1967 Philadelphia based producers Gamble and Huff came to Pittsburgh to see the Jaggerz perform at the Staircase lounge and signed them to a record contract.  The Jaggerz released their first album, “Introducing the Jaggerz” in 1969 on Kenny Gamble’s label Gamble Records.  The album featured the regional hit song "Gotta Find My Way Back Home” written by the Steals Brothers (Mystro & Lyric). The Steals Brothers later wrote the million selling hit “Could It Be I’m Falling in Love” for the Spinners. The single received strong airplay on KQV, KDKA, and other Pittsburgh stations. It reached the top 10 in Pittsburgh.

Andrew Hamilton  of the All Music Guide calls “Introducing the Jaggerz” an R&B classic “Steeped in R&B, The Jaggerz are absolutely thrilling rehashing the Intruders' "Together," the Temptations' "Ain't No Sun (Since You Been Gone)," Jackie Wilson's "Higher and Higher," and the Diplomats' "Here's a Heart." They also shine on originals "(That's Why) Baby I Love You," "Bring It Back," and Philly sounds like "Gotta Find My Way Back Home.

Kama Sutra signed the Jaggerz and released the single “The Rapper” in December of 1969. KQV AM broke the record in Pittsburgh where it quickly reached the top of the charts.  It was the number 1 song in Pittsburgh for four straight weeks during January of 1970 before it broke nationwide.  The Rapper spent six weeks in the Billboard Top Ten from March 7 through April 11 of 1970.  It peaked as the number 2 song on Billboard on March 21 beating out the Beatles “Let It Be” and spent 13 weeks on the charts.  It reached Number 1 on the Record World 100 Top Pops Chart on March 21 1970 beating out Simon and Garfunkles’ “Bridge Over Troubled Waters". The singles “What A Bummer” reached number 88 and “I Call My Baby Candy” reached number 75 on the Billboard Hot 100 and the album “We Went to Different Schools Together” rose to 62 on the Billboard Top 200 chart.  After appearing on American Bandstand, the Jaggerz went on tour with the Dick Clark’s Cavalcade of Stars.

In 1973 the Jaggerz performed as the backing band on the Wolfman Jack album "Through The Ages" released on Wooden Nickel Records a subsidiary of RCA.  Wolfman Jack sang ""The Rapper".  The Jaggerz released their third album “Come Again” on Wooden Nickel Records in 1975.  It featured the song “I’ll Be Okay in the Morning” co-written by Donnie Iris and Hermie Granati, who became a member of the Jaggerz. Jimmy Ross left to join the Skyliners in 1975.  The Jaggerz broke up around 1978.

After the Break up the members on Jaggerz went on to more success in the music business.  Singer Jimmie Ross performed with the Skyliners from 1975 through 1982.  He recorded with them on their 1978 album 'The Skyliners'.  In 1983 Ross and Cathy Cooper left the Skyliners to form the duo Cooper and Ross.  They performed together for five years and released the album "Bottom Line" on Sweet City Records / MCA.  Donnie Iris joined band Wild Cherry before he formed Donnie Iris and the Cruisers.  He scored another number 2 national hit with the song 'Ah Leah". Donnie Iris landed 9 singles in the Billboard top 100 lists.  He released ten albums with the Cruisers, five of which made it to the Billboard top 200 list.  Jim 'Pugs' Pugliano moved to Los Angeles where he became a session player and sideman. He recorded with Leon Russell, Roger Miller, the Hudson Brothers and Don Preston. As a sideman Pugs toured with J.J. Cale, Tony Orlando, Willie Nelson, Mel Tillis and John Davidson.  Hermie Granati joined with his siblings to form the Granati Brothers who released the album “G-Force” on A&M Records and toured the country opening 78 shows on two national tours with Van Halen in the 1980s.

The Jaggerz reunited in 1989 to perform live. The reunited band included the original members Jim Pugliano, Benny Faiella and Bill Maybray.  Jimmie Ross rejoined and the Jaggerz have performed 20 to 25 shows a year since.  The Jaggerz released their album "And the Band Played On" in 1998. The All Music Guide calls it "Heartfelt soul music". Performing on this release were Jimmie Ross, Eugene "Benny" Faiella, Jim "Pugs" Pugliano, Dennis McAbee, Jamie Peck and Hermie Granati who wrote the orchestrations, performed on keyboards and vocals, and co-produced with Jimmie Ross.  The Jaggerz released their sixth album "Re-Rapped By Request" in 2001 with a mix of their most fan requested songs including "Dancin' in the Streets", "Some Kind of Wonderful", "The Love I Never Had" and a live version of the "Rapper".

The Jaggerz will release the album “The Walk” in April of 2014.  It is co-produced by Hermie Granati and five time Grammy winner Jay Dudt of Audible Images who has worked on recordings with Dave Matthews, Pat Metheny, Nancy Wilson, and others.  The album will have new arrangements from the Jaggerz catalog including "That's Why Baby I Love You" and “Together” (from the Introducing the Jaggerz album) along with “The Walk” and an arrangement of Billy Vera's 'At This Moment.'   In the Motown-style “The Walk” Jimmie Ross tells his fine but cheating woman, "So long you did me wrong… You can walk your long legs, baby, right out of my life."